It looks like Russian Su-24s flew over US warship in Black Sea. Again.

Reportedly, the U.S. Navy destroyer USS Ross was heading directly towards Russian waters after leaving the Romanian port of Costanta. Russian Su-24s were scrambled towards the warship.

After the close encounter with the Su-24 jets, the destroyer “then turned around and left for neutral waters,” says RT, suggesting an unlikely violation of the Russian territorial waters by the U.S. warship.

“It seems that the Americans did not forget the April 2014 incident when one Su-24 actually shut down all equipment on the new USS Donald Cook American destroyer with anti-missile system elements,” an unnamed source said to Sputnik News.

The mysterious source refers to the April 2014 incident when a Su-24 Fencer flew multiple passes at 500 feet above sea level, within 1,000 yards of the USS Donald Cook, the U.S. Navy destroyer operating in the Black Sea at that time: a behaviour that the ship commander considered “provocative and inconsistent with international agreements.”

Following the incident, speculations (fueled by propaganda) reported that the Su-24 jammed all the systems aboard USS Cook to such an extent all the onboard screens went black and 27 officers resigned as a consequence of the attack: a quite unbelievable and unlikely story. 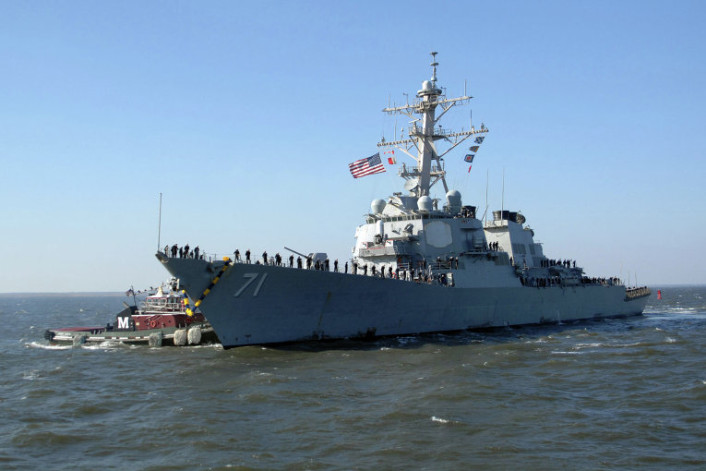 Some new interesting (internal and external) images have emerged of the only Project 903 Attack/Transport ground effect vehicle (Ekranoplan) with carrier-killing supersonic missiles that has recentlty made its final voyage before becoming museum. On Jul. […]

From Greece with love: Russia's aircraft carrier flight ops in the Mediterranean sea

If the Chinese aircraft carrier Varyag, serving as a testbed for the development China’s future naval aviation, is far from being a factor, Russia’s flagship Admiral Kuznetsov, a “heavy aircraft-carrying missile cruiser”, equipped with an […]

Sources say it might be the result of a Ukrainian attack, but no official word from Ukrainian MoD yet. Russia denies the attack. Massive explosions, visible from miles away, rocked a Russian airfield near Novofedorivka […]