The following video was recorded on Dec. 14, from a C-130 with the  36th Airlift Squadron from Yokota Air Base, Japan, as the cargo plane (departed from Andersen Air Force Base, Guam) delivered humanitarian aid boxes to six locations in the Federated States of Micronesia as part of Operation Christmas Drop 2012.

Noteworthy, wheareas most of the boxes land on sort-of WWII airport’s runways, some are air dropped into the water making it a bit difficult to pick up.

This year is the 61st anniversary of OCD, making it the longest running humanitarian mission in the world. Started on Dec. 10, in total, there are eight planned days of air drops, with 54 islands scheduled to receive humanitarian aid. 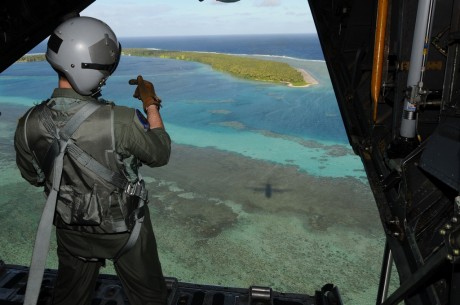 The following footage shows Mirage F1ADs and Mig-23s refueling from Il-76T and C-130s during trials reportedly conducted between the end of the 1980s and 1994. Noteworthy, at min 04:19 you can see a Gaddafi’s Mirage’s […]

Antarctic Chilean C-130 Flight With 38 On Board Disappears Over Drake Passage.

Aircraft En Route to Antarctica Over Treacherous Waters When Comms Was Lost. A Chilean military C-130 transport flying from Punta Arenas, Chile to King George Island, Antarctica was reported missing yesterday when communications with the […]