Here below you can find the latest update from Syria based on the details that Bjørn Holst Jespersen, a contributor of The Aviationist, has continued to post on his blog.

But, first of all, let’s have a look at a map of Syria, in order to understand why some cities are more important than others for the outcome of the uprising.

In the map below Bjorn has highlighted the special geographical look of the present conflict in Syria. As can be seen, the two largest cities – Damascus and Aleppo – are placed relatively far apart, and keeping those two cities connected is a central part of maintaining control of the country. A scenario where Aleppo is cut off from Damascus would significantly increase the chance/risk of the regime loosing control of the city. And that would most probably seal their fate.

The M5 highway/motorway (red line on the map below) is quite illustrative of this specific phenomenon, and the importance of controlling this route is easily understood.
What also becomes clear from studying the map is that the cities Hama, Homs and Rastan are placed in key positions. Loosing control of those cities will to a large degree isolate Damascus from Aleppo, which must be considered extra critical to the regime. 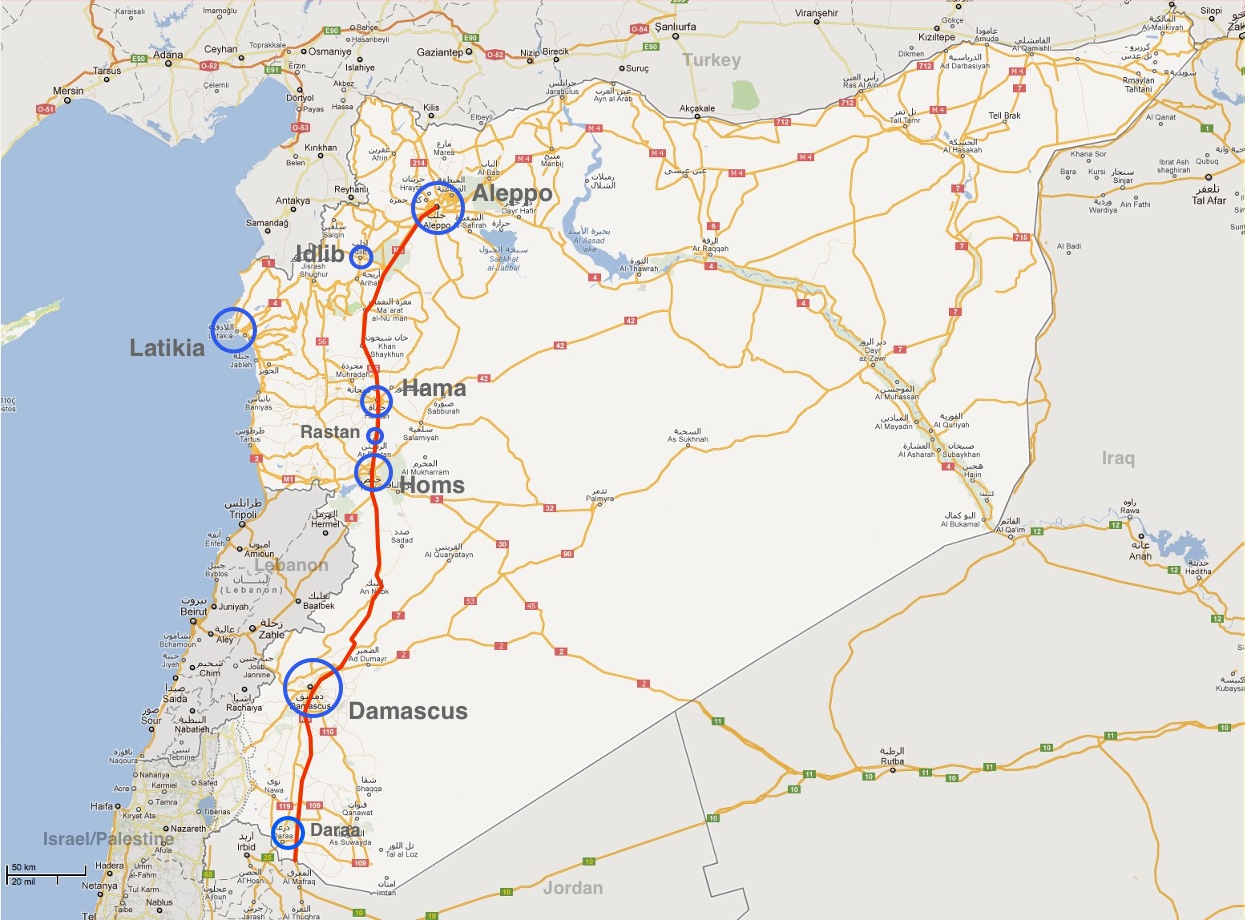 Screen shot from Google Maps with markings by me. Red line is the M5 highway linking Damascus to Aleppo

Aleppo is equal to Damascus in size.Moreover, if the metropolitan areas of Homs and Hama are combined with the city of Rastan (61,000) the population reaches about 1.28 million. Given the strength of opposition in these cities it’s a quite considerable number to have placed in this strategic area.

Stitched together frames from a video on Mohamadfreedom92’s YouTube channel. Uploaded May 24. 2012. *note: there are five artillery pieces, but one is hardly visible behind the tent from this angle. Video and help identifying the weapon via @markito0171.

On May 24. a video came out. It is said to show an artillery position firing at Hama and, according to Bjørn it shows five 2S1 Gvozdika. These are self-propelled 122 mm howitzers and at the 1:55 min video the position fires six times.

According to Wikipedia, Syria operates about 400 of these, and according to images released on Feb. 10. 2012 by U.S. Department of State, such weapons are known to have been deployed by the Syrian regime, though at that time in an other position.

Frame from video on Mohamadfreedom92’s YouTube channel. The ID on the 2S1s in this video is certain. Uploaded May 26, 2012.

From another video uploaded on May 26. there is more evidence of this weapon being used by the regime.

The image above is a frame from that video showing a number of 2S1s are being moved on trailers. The date of this recording is unknown and according to the title of the video (and Google translate) this movement has to do with Homs refinery. But still this – besides substantiating some weapons id – gives an idea of what kind of military force is being deployed against the opposition.

In the image below, to the left is a 2S1, and to the right – for comparison – Bjørn placed a photo of the larger calibre 2S3 Akatsiya. The 2S3 is mounted with a 152.4 mm howitzer and is considerably heavier than the 2S1 (16 vs. 28 ton). His main basis for the identification is that the light makes it possible to see that the hull-sides of some of the pieces have an unbroken vertical wall above the tracks.

This matches the 2S1 better. Also only the 2S1 have two hatches on top of the turret. The best id-view will be to freeze a frame at about 1:26 min. in the video from the firing position.

Left a Polish 2S1 seen from an angle that resembles that of the vehicles in the video. Image from Wikipedia. Right: for comparison, a 2S3 Akatciya. Source: Dishmodels.ru

On May 27. the Syrian regime closed in on the city (Hama), especially the North Eastern neighbourhood, Al-Arbaeen, which was surrounded from about 5 am until the evening. Several other neighbourhoods were targeted too and according to activists, snipers were positioned on roof-tops preventing the population from moving – and from helping those wounded by shelling.

According to those same sources, on May 28. the assault was still ongoing, and a number of videos are coming out showing some of the deployments of regime forces.

The videos together show the high level of deployment of military in the city (in contrast with the Annan six point plan).

The BMP-1s, that can be seen above, in the frame to the left, have been extensively used by the regime throughout this conflict, and before 2011 the Syrian Army was believed to have around 2,000 of these. They are armed with a 73 mm 2A28 Grom low pressure smooth-bore gun that fires rocket assisted grenades.

Images show fragments of two different models of these grenades. The most common model together with a BMP-1 can be seen here, and the other here.

The frame to the right, has two more BMP-1s passing through. They both seems to have an unusual arrangement above the rear hatches. It might be meant to give the rear-end the same ski-tip profile as the front. It would make some sense according to Bjørn.

In the last part of the video one of the BMPs also gives a fine demonstration of the turret capabilities.

In the image below, to the left, is a truck mounted ZPU-4. It’s a four barrel 14.5 mm heavy machine gun originally intended for anti aircraft use, and this video corroborate reports from @HamaEcho that these weapons had been seen by this source for the first time only a few days ago.

However back on Apr. 11 here at The Aviationist we had a post showing a video of opposition forces firing at a regime helicopter. The weapon used is not visible but an expert makes a very convincing case identifying it as the ZPU-4.

The frame to the right gives an impression of what kind of deployment of troops this also involves.

A group of UN observers is currently stationed in Hama, but there are no reports of what they might have done during these attacks.Helicopters

Although there have been claims of helicopters shot down by the Free Syrian Army, at the time of writing the news has not been confirmed. There is a footage allegedly showing a Mi-8 helicopter being hit by anti-aircraft fire, but its quality is extremely low.

Even if they don’t show helicopters being hit and downed by the FSA, the following videos, respectively filmed on May 23 and Jun. 2, seem to document the use of Mil Mi-8 choppers to attack rebel positions from medium-low level.

The U.S. Air Force Central Command has released the video of a T-72 tank destroyed by a drone in Syria. The following video shows a U.S. MQ-9 Reaper drone destroying a Russian-made T-72 main battle […]

The following video, brought to my attention by Bjørn Holst Jespersen shows a Syrian Mi-8/17 Hip attacking civilians/rebels near Azaz, some 30 km nortwest of Aleppo, Syria. After many videos uploaded to Youtube showing drones […]