Both pilots ejected safely, even if one of the pilots was reportedly recovered still in his seat. 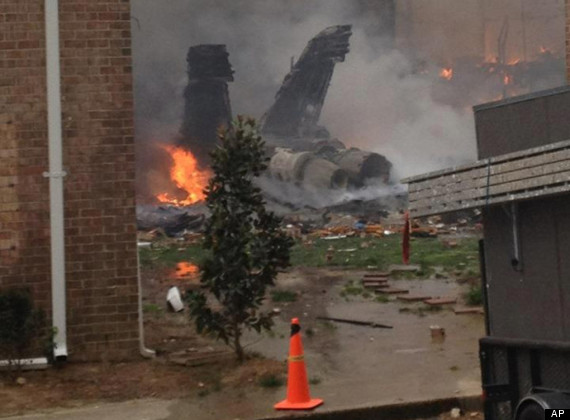 Image of the crashed VFA-106 Hornet shows right engine nozzle fully open, and left nozzle closed: this could be a sign that, while the right engine was working properly providing max thrust, the left one was not (hence the closed engine nozzle).

The Squadron serves also as the U.S. Navy East Tactical Demo team and a soloist F-18C of the team performed at the recent Sun n’ Fun. 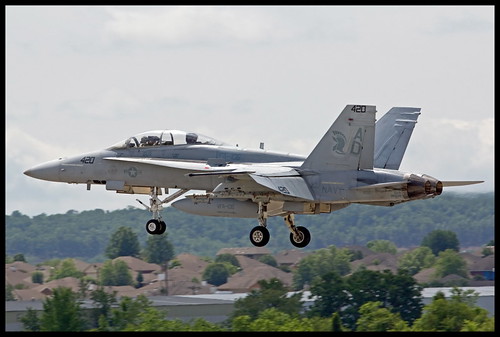 According to reports, some loud bangs were heard: this could be a symptom of a compressor stall.

“A compressor stall is a situation of abnormal airflow resulting from a stall of the aerofoils within the compressor. Stall is found in dynamic compressors, particularly axial compressors, as used in jet engines and turbochargers for reciprocating engines. Compressor stalls result in a loss of compressor performance, which can vary in severity from a momentary engine power drop (occurring so quickly it is barely registered on engine instruments) to a complete loss of compression (compressor surge) necessitating a reduction in the fuel flow to the engine” (Wiki).

A particular kind of stall is the so-called compressor surge that is a complete breakdown in compression that occurs when compressor’s blades stall (airfoils) just like an airplane wing stalls, because the flow is disrupted or the angle of attack gets too high, forward flow through the compressor can no longer be maintained, air piles up in the rear stages of the compressor without being compressed and a momentary reversal of flow causes a violent expulsion of previously compressed air out (sometimes) through the intakes too. The excess air can cause a loud bang a flames (because of the high temperatures).

Unless blades are damaged because of FOD (Foreign Object Damage) or birdstrike, the compressor will usually recover to normal flow once the engine pressure ratio reduces to a level at which the compressor is capable of sustaining stable airflow. Some engines have automatic recover functions even if pilots experiencing the surge can be compelled to act on the throttle or, in some cases, relight the engine.

On Dec. 9, 2008, a similar accident happened on the West Coast, when another F/A-18D Hornet, belonging to the VMFAT-101, crashed into a residential area of San Diego.

The following video is the 1,200th one uploaded by the U.S. Navy on Youtube. It shows, from the inside, the VFA-211 airborne change of command that took place while the “Fighting Checkmates” Strike Fighter Squadron […]

Boeing P-8A next generation anti-submarine warfare and maritime patrol aircraft introduced. While test flights (that you can track on the Internet) continue

On Mar. 28, US Navy VP-30 at NAS Jacksonville took formally delivery of the first Boeing P-8A Poseidon. The next generation maritime multi-mission aircraft, whichwill eventually replace the P-3 Orion, will be used for aircrew […]

A new video that appears to show the Blue Angels crash in Tennessee has been posted online. A new video uploaded to Youtube yesterday seems to show the deadly crash that killed Capt. Jeff Kuss, […]