Few days ago I published an article after seeing a picture that showed two single seat Mig-21bis and one double seat Mig-21UM flying over Benina airbase at the end of June. The image not only showed three of the four Mig-21s that were reported to have defected on Mar.17, but raised also some questions about the No-Fly Zone.

Someone wondered if preventing the Free Libya Air Force fighters from flying would have any sense if we consider that NATO and its coalition partners are (more or less….) there to help them. What I’ve explained them, is that the problem is strictly tied to the use of common procedures and to the prior coordination required to engage a densely populated airspace, as the Libyan NFZ, with fast jets: unless they know Transit Corridors, radio frequencies, transponder/IFF codes, etc., and are properly deconflicted, instead of being useful, FLAF plane could be extremely dangerous for other coalition planes. That’s why the NFZ applied to both pro-Gaddafi and rebel planes as the interception of a FLAF Mig-23 on Apr. 9 shows.

After discussing about the NFZ with Guido Olimpio, Corriere della Sera’s special correspondent from Washington DC, he sent me the following Reuters images that show an Air Libya BAe 146 used to link Benghazi with Rhebat, in the Nafusa region, a new airfield opened in the remote Western Mountain stronghold south of Tripoli. The “runway” is quite narrow and only small transport planes, capable of taxing from unprepared aprons, can operate from it.

Since it is impossible to operate those flights without NATO’s approval, the photos, taken on Jul. 12, 2011, explain the reason why the Mig-21s were flying over Benina on Jun. 27: a limited rebel flight activity must have been granted to the rebels (probably in the form of a transit corridor between Benina and Rhebat).

The most intriguing, and less likely/almost impossible theory, is that the Mig-21s are used to provide some kind of escort to the Air Libya BAe146 during the first part of its flight to Rhebat.

Air Libya is a privately owned company which operated charter flights in support of oil field operations and some charter services from Benina airport. (Photo: Reuters) 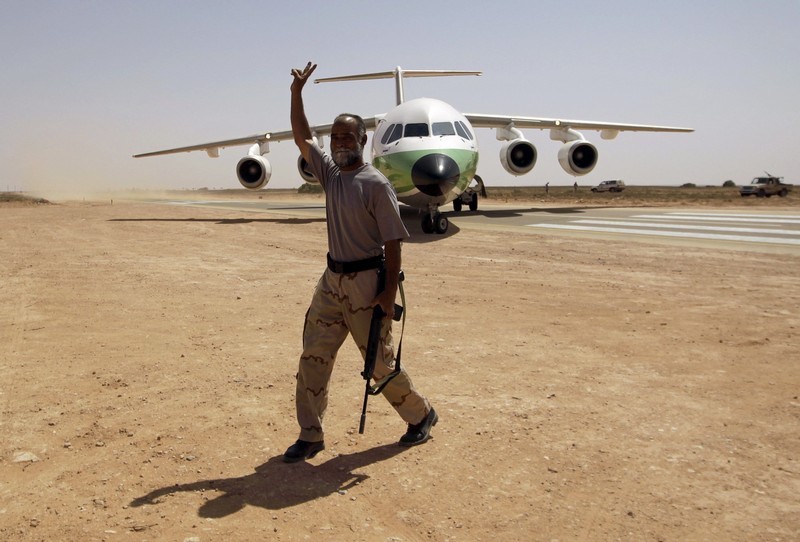