One of the recent most discussed topic on this blog was the one about the Argentine Air Force IA-63 Pampa performing a crazy low passage. If you read my post and the subsequent thread of comments, you’ll see that the video caused a debate between those (like me) who consider that flyby an example of poor airmanship and those (mainly Argentinean readers) who believe that the “low passage” showed the skill of Argentinean pilots.

In the meanwhile, a new video shows how risky this performances can be. An amateur footage posted on Liveleak shows an Argentine AF A-4AR Fightinghawk performing a high-G climb from low level whose “collateral effect” is the collapse of the right fuel tank (with debris falling on the airport). Obviously, the maneuver which caused the fuel tank “disintegration” is not as dangerous as the Pampa one, but it demonstrates that flying at low altitudes at high speed (in this case with modernized planes built in the ’70s), when not strictly required for operational purposes, can stress the airframes to such an extent they could break apart, (potentially) causing loss of control of the aircraft or simply rendering an airport unserviceable because of debris and consequent FOD (Foreign Object Damage) risk. Don’t forget that the IA-63 Pampa pilot in the above mentioned video, pulled 5.3 G (the HUD signals “Max G”) in the zooming following the flyby. What if his fuel tank collapsed creating a weight unbalance at ultra-low level? 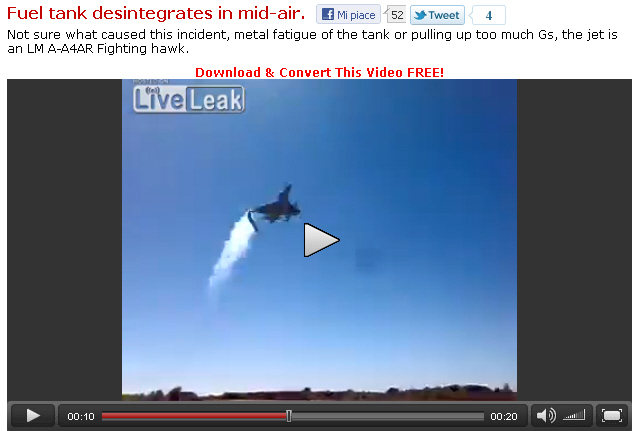 Helicopters and the risk of RFID hacks

Eurocopter and Telit recently signed a contract according to which, Telit RF Technology will develop a wireless communication system to monitor helicopters critical systems and to improve aircraft maintenance. According to the information that have […]

An interesting video taken from a passenger of the Qantas QF30 flight was released. The footage was taken after the B747-438 levelled off at 10.000 feet above the sea in bound to Manila airport. The […]

Lufthansa A320 wingstrike at Hamburg

I’ve been receiving a lot of questions dealing with the LH Airbus 320 D-AIQP crosswind landing incident occurred on Mar. 1 at Hamburg airport. For those who don’t know yet what happened, I suggest having […]