The NOTAM below, issued for LIRR (Roma ACC), is one of a series which testifies the presence in the Mediterranean Sea of the USS Enterprise. The “Big E” will be conducting blue waters ops between SE Sicily and the Tyrrheanian Sea until Feb. 4. However, since civil war and anarchy seem to be a concrete risk as thousands Egyptians are clashing with police forces defying the curfew to protest against President Mubarak to express a demand for more democracy and the improvement of living standards, it is quite probable that Enterprise Strike Group will be ready to relocate rather quickly off the coasts of Egypt, to take part to the eventual evacuation of the US Embassy (currently defended by the Egyptian Army) or of American citizens unable to leave the country, should the need arise.

W0268/11 (Issued for LIRR PART 1 OF 2) – NAV WARNING.
CARRIER FLIGHT OPERATIONS WILL BE CONDUCTED IN
ROMA FIR/UIR (NORTH OF 363000N) IN INTL WATERS WI 150NM RADIUS OF
354000N0154500E (LMMM FIR/UIR) /MEDITERRANEAN SEA-SE SICILY ISLAND/
RMK: 1. ACFT WILL OPERATE UNDER THE PROVISION OF DUE REGARD
FOR THE SAFETY OF OTHER AIR AND SFC TFC IN THE VICINITY
OF THE FLEET. ALL FLIGHTS WILL COMPLY WITH APPLICABLE
ICAO PROCEDURES FOR FLT IN INTL AIRSPACE. ACFT WILL
OPERATE IN VMC OR WI RADAR SURVEILLANCE AND RDO COM OF
A SFC OR AIRBORNE RADAR FACILITY. THESE CONDITIONS
PROVIDE A LEVEL OF SAFETY EQUIVALENT TO THAT NORMALLY
GIVEN BY ICAO AIR TRAFFIC CONTROL AGENCIES AND FULFILL
UNITED STATES GOVERNMENT OBLIGATIONS UNDER ARTICLE 3
OF THE CHICAGO CONVENTION OF 1944 WHICH STIPULATES
THERE MUST BE ‘DUE REGARD’ FOR THE SAFETY OF NAVIGATION
OF CIVIL ACFT WHEN FLT IS NOT BEING CONDUCTED UNDER
ICAO FLIGHT PROCEDURES. ESSENTIALLY, FLT UNDER THE
‘DUE REGARD’ OR ‘OPERATIONAL’ OPTION OBLIGATES THE
END PART 1 OF 2. 04 FEB 07:00 2011 UNTIL 04 FEB 23:59 2011.
CREATED: 28 JAN 21:25 2011

W0267/11 (Issued for LIRR PART 2 OF 2) –
OF THE CHICAGO CONVENTION OF 1944 WHICH STIPULATES
THERE MUST BE ‘DUE REGARD’ FOR THE SAFETY OF NAVIGATION
OF CIVIL ACFT WHEN FLT IS NOT BEING CONDUCTED UNDER
ICAO FLIGHT PROCEDURES. ESSENTIALLY, FLT UNDER THE
‘DUE REGARD’ OR ‘OPERATIONAL’ OPTION OBLIGATES THE
MILITARY ACFT COMMANDER TO BE HIS OWN AIR TRAFFIC
CONTROL AGENCY AND TO SEPARATE HIS ACFT FROM OTHER
AIR TRAFFIC.
2. AS FOR ALL ABOVE, GAT (GEN AIR TFC) IS REMINDED THAT
THE ITALIAN ATC WILL PROVIDE SER AS FAR AS PRACTICAL
IN CONNECTION WITH U.S STATED MILITARY ACTIVITY. SFC – FL240)
END PART 2 OF 2, 03 FEB 07:00 2011 UNTIL 03 FEB 23:59 2011.
CREATED: 28 JAN 21:18 2011

I took the following picture of USS Enterprise when I visited the aircraft carrier in 1999 at Leghorn. 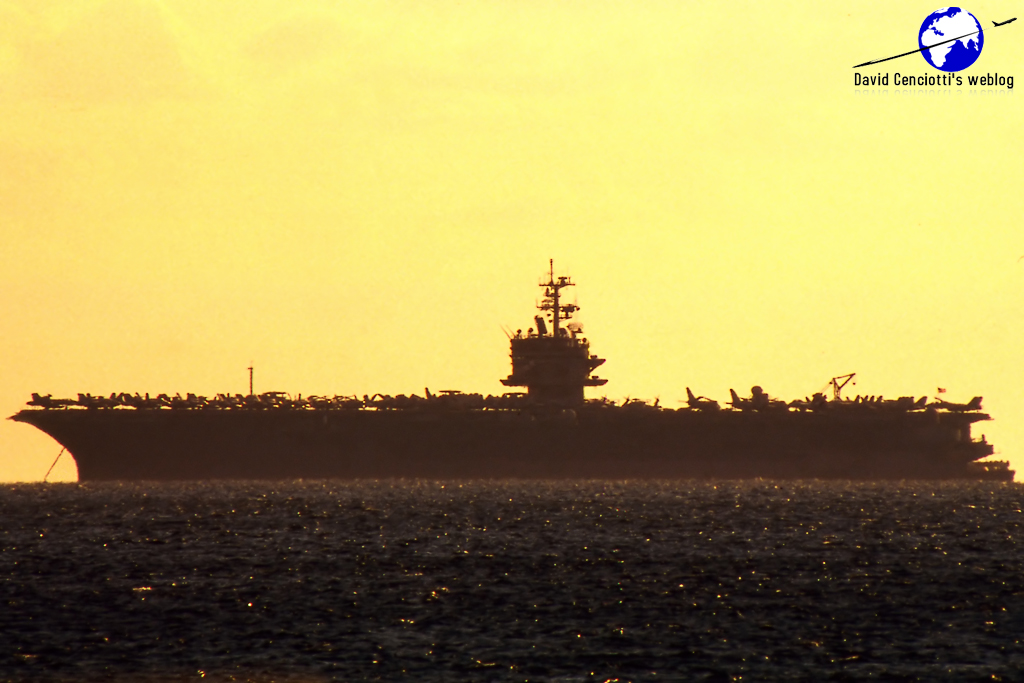 The Story of a U.S. Navy S-2 Tracker that lost one engine, at night, in bad weather, off Norway

Flying a US Navy S-2 single engine to the beach while the ship was begging it to come back aboard. “Jimmy, how you doing?” Jack shook my hand. We were in the Reno, Nevada hotel […]

These are flight deck ops. French style. This cool video filmed with GoPro cameras, shows launches and recoveries aboard the 38,000-ton, nuclear-powered aircraft carrier Charles De Gaulle. The footage not only lets you observe blue water […]