A the helicopter Eurocopter AS350 (N401LH), operated by Liberty Tours, which conduct tours of NYC and the harbor, carrying a pilot and 5 Italian passengers and a Piper PA-32R Lance (N71MC), collided and crashed into the Hudson River on Aug. 8, 2009 killing 9 people. According to the witnesses and reports, the Piper, that had just left Teterboro Airport with a pilot and two passengers, and was bound for Ocean City, N.J., appeared to overtake the Liberty tours helicopter and hit it. The aircraft were flying Southbound along the VFR corridor, a special route below 1100 feet MSL (Mean Sea Level) which runs below the tops of several buildings and skyscrapers to the West of Manhattan.

I took the following picture from the Empire State Building in March 2008. It shows two sightseeing helicopters flying over the Hudson River to the West of Manhattan. 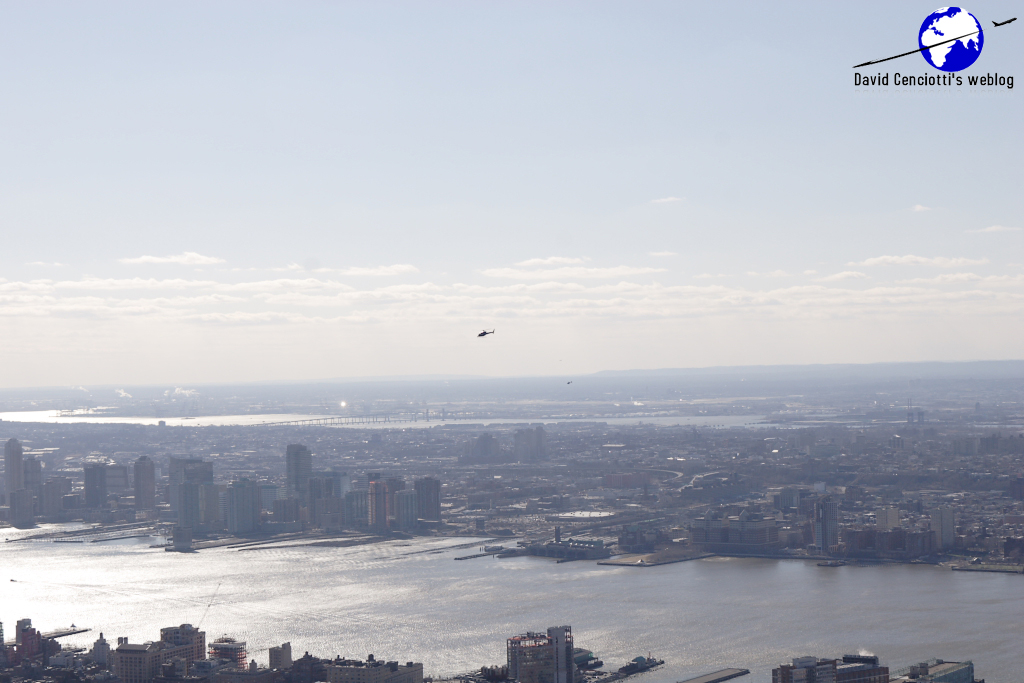 Even if mid-air collisions are not so frequent (since it is not easy to get into another plane in the air neither intentionally nor casually), the Hudson Corridor can be considered somehow dangerous: it is really busy and congested, traffic is hard to scan because pilots tend to wander to the view of the NYC skyline and other aircraft camouflage themselves with the “noisy” background. Aircraft within the “exclusion zone,” the airspace which extends up to 1.100 feet, are not required to communicate with the ATC (Air Traffic Control) ; pilots must talk to ATC when they are entering that zone and when they are flying out of it, but once they’re operating in that area, they’re flying under visual flight rules and must keep listening watch on the CTAF (Common Traffic Advisory Frequency) to self-announce their position. There’s a sort of convention for pilots to broadcast position, altitude and next reporting point at several locations along the Hudson River corridor: abeam the Statue of Liberty, Holland Tunnel, Empire State, etc. 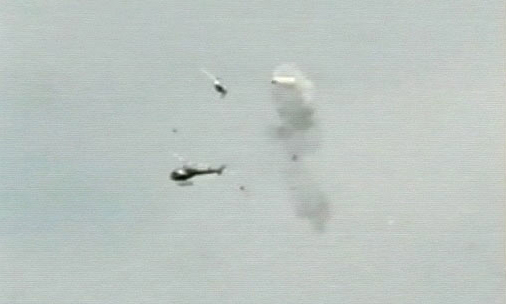 The following text is an excerpt of an article published by New Jersey Real-Time News at www.nj.com website. It is quite interesting, since it provides some information about previous similar accidents, involving sightseeing tours helicopters in NYC:

………….
Liberty Helicopters, which is based in New York City, operates out of two helipads, one at W. 30th St. on the Hudson and the other downtown, at Pier 6 on the East River. The helicopters can carry eight people, including 7 passengers, who pay $150 for a 6-8 minute tour and $230 for 16-20 minutes, The tours typically take in the Statue of Liberty, and Ellis and Governors Islands.

Liberty tours describes itself as “the largest helicopter sightseeing and charter service in the Northeast.”

The company’s helicopters have been involved in several incidents in its 23-year history. Eight people escaped serious injury in July 2007 when a Liberty tours helicopter experienced engine trouble and made an emergency pontoon landing in the Hudson just north of the Lincoln Tunnel.
AP Photo/Fox News ChannelThis image courtesy of Fox News reportedly shows the collision between a tour helicopter and a small plane over the Hudson River in New York today. Fox News reports that they obtained the image from tourist traveling on a tour boat.

Liberty helicopters was investigated by the National Transportation and Safety Board 11 years ago after the rotor of one of its helicopters made contact with a building at the heliport at W. 30th Street as it was landing. Four people suffered minor injuries in the Dec. 31, 1996 incident. The NTSB report cited pilot error and a strong tailwind.

Residents along the westside of Manhattan have long complained about the fumes and noise from the various sightseeing tours that operate out of the three heliports in Manhattan and Jersey City. A lawsuit against the owners of the W. 30th street heliport settled a lawsuit last year when it agreed to cap tourist flights between June 2008 and May 2009 at 25,000.

In October 2006, Yankee pitcher Cory Lidle was killed with his flying instructor after taking off from Teterboro for a Manhattan sightseeing trip. After flying south down the Hudson, and around the Statue of Liberty, Lidle’s single-engine plane failed to negotiate a turn over the East River and crashed into an apartment building at 72nd St. Under exiting regulations they flew the whole route without advance permission, required only to stay over the river and below 1,100 feet. Days later, however, the FAA changed the rules for fixed-wing aircraft, requiring they ask permission before flying along the East River.

Gov. Jon Corzine and Hoboken acting mayor Dawn Zimmer held a brief press conference a few hours after Bloomberg, expressing their condolences to the families of all the victims. Corzine also cautioned that,”we wouldn’t want this kind of circumstance repeated. We need to be mindful there are many more people living along the waterfront,” these days. He also hearkened back to the U.S. Airways flight that safely landed in the Hudson in January, sparing all lives on board.

An interesting and detailed description of the Hudson River VFR corridor can be found here:
http://nishino.typepad.com/learning-to-fly/2009/05/flying-the-ny-vfr-corridor.html

What About A “Stealth Little Bird”?

We discuss the possible existence of a quieter “Stealth Little Bird”, based on a true story about the silent OH-6 used during the Vietnam War. I’ve already written a lot about the Stealth Black Hawk […]