As I explained in a previous post, during my travel in Syria in November 2008, I had the opportunity to visit an interesting museum: the “Tishreen War Panorama Museum”, in Damascus. The Museum was built to celebrate the War that took place in the October 1973 (”Tishreen” means “October” in Arabic), known also as the Yom Kippur (the Jewish Day of Atonement) War. The war was fought by Syria and Egypt against Israel, to conquer the Sinai peninsula and the Golan Heights lost in the Six Days War in 1967. Actually, the memorial got its name by the 360° painting located inside the cylindric-shaped “citadel” that portraits the “panorama” of the battle of Quneitra, the city in the Golan Heights conquered by the Israelis during the “Six days War” that the Syrians were taking back in 1973. The collection comprises both Syrian equipment (aircraft, tanks, cannons) and Israeli equipment captured during the 1973 war and in 1982 war in Lebanon.
As I returned from the visit, I was eager to find more information about the Syrian Arab Air Force involvement in the 1973 war. I was also interested in finding some more details about a Mig-21 and a MI-8 of the Quwwat al-Jawwiya al Arabiya as-Souriya (Syrian Arab Air Force, SyAAF) exhibited at the Museum, and I started looking for facts, dates and reports. However, the SyAAF is most probably one of the most secretive air forces of the world. If you try to search in the Internet you (probably) won’t find much about this Middle East air force and very little has been published on the subject. Pictures are rare as well. The most detailed analysis of the Yom Kippur war (and much more) I was able to find, was in an Osprey Publishing book: Arab Mig-19 and Mig-21 units in combat. Osprey is an independent England-based book publisher specializing in military history, that runs several aviation series, including the extremely popular Aircraft of the Aces and Combat Aircraft series. Every book contains everything I and many other aviation experts or enthusiasts look for: aircraft data, diagrams, maps, serials, and pictures. The “Arab Mig-19 and Mig-21 units in combat” (Paperback; March 2004; 96 pages; ISBN: 9781841766553) title is not only focused on the SyAAF involvement in the Yom Kippur war. 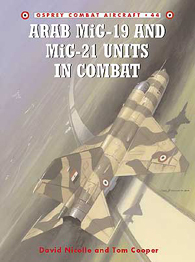 It provides a detailed history of the MiG-21 in Egyptian, Syrian and Iraqi service including many pictures, most of which have never been seen before, outside the Arab world. The book sheds a light on the Arab-Israeli conflicts that in the past have been recolled mainly from the Israeli’s perspective. It doesn’t present a different story and doesn’t suggest that the Arab forces were better than Israeli ones, but contains many research material, much more than I could expect, coming from official sources and from private collections and recollections of those who flew (or fought against) Migs in combat and recounts a story of (courage and) competence that was underestimated in the West. The book covers the Arab operations from 1959 to the Gulf War. Interestingly, the analysis of the Yom Kippur war, not only describes the facts, but provides details of the actions and in most cases even the tactics and the names of the pilots involved in the operations against Israel. According to the authors (David Nicolle and Tom Cooper), by late 1973, the SyAAF had 10 Mig-21 squadrons equipped with more than 100 operational aircraft, 60 to 70% of which were combat ready. The number of MF examples was sensibly lower than that of older Mig-21F-13s and PFs that were kept into active service. The Ramadan War (as the 1973 conflict is also known as), for the SyAAF Mig-21 units started with escorts missions the Fishbed flew in support of the Su-20s, Su-7s and Mig-17s sent to attack Israeli radar sites located on the Golan Heights. As the Israeli fighters were not airborne, the first missions were rather simple. Noteworthy, the Mig-21s, escorted also a formation of Syrian Mi-8 helicopters that were used to deploy commandos to capture the Mount Hermon observation post, even if the main role of the Fishbeds was interception and CAP (Combat Air Patrol).
In the following days the Mig-21s clashed with the Israeli fighters, downing attacking F-4s and Mirage IIIs (that suffered losses and damages also because of the Syrian SAM-belt and anti-aircraft fire). The book contains the detailed descriptions of several engagements. One of them is described as follows: “…..Minutes later, a 7th Sqn section led by Capt. Asaf, surprised four F-4s in the Tartus area. All the Syrian pilots managed to fire their missiles, but they either malfunctioned or were launched too close, as only one of Asaf’s scored a hit. A Phantom II immediately fell, while the rest of the Israeli formation accelerated and outpaced the Migs westward. Almost two hours later another F-4 formation was detected approaching Sayqal air base. Eight Mig-21s led by Capt Kahwaji were scrambled, and the two formations clashed head-to-head north of Damascus. A wild mêlée followed in which Kahwajii outmanoeuvred one of the Phantom IIs and attacked it with two missiles. One went ballistic byt the other scored a direct hit, entering the F-4E’s jet-pipe and reducing the aircraft to a brilliant fireball. Kahwaji’s aircraft was then hit by another Phantom II, but he ejected safely…….” . The SyAAF Mig-21s took part to the desperate defense of Damascus as the Israeli were advancing in Syrian territory. Even if the ceasefire was was called by UN resolution 338 to start at midnight on Oct. 22, fighting did not cease until Oct. 24 and according to the “Situation Report in the Middle East as of 1200 EDT, 10/23/73”, issued by the Department of State Operations Center, a large air battle took place near Syria capital town in the morning of Oct. 23, 1973: SyAAF claimed 60 Israeli fighters were involved of which, 11 were shoot down; the IDF said 10 Syrian aircraft were downed. 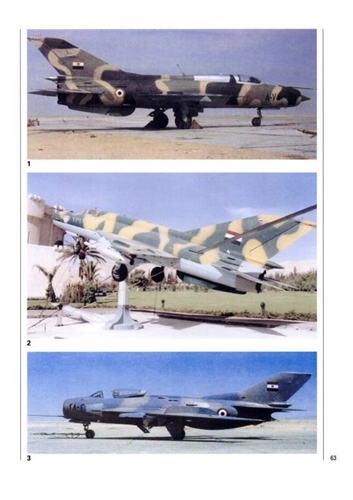 As said, among the Syrian equipment exhibited at the Tishreen, there is a Mig-21. The fighter has no markings but the serial number “676″ (in Arabic) on the left side of the tail and carries two AA-2 Atoll missiles and two UB16 pods for 16 57mm rockets. I took many pictures of this aircraft that you can see along with all the rest of the images of the Tishreen War Panorama Museum at the following address: http://lowpassage.com/2009/05/15/tishreen-war-panorama-museum-damascus-syria-november-2008/. The Osprey book has an interesting colour picture of the aircraft whose caption explains: “A Mig-21MF in completely reparinted Syrian Air Force markings and camouflage on display outside the 1973 War Panorama Museum in Damascus. The serial 767 (note it is actually 676) is painted in black outlined in white, which was never seen of machines actually in service. Furthermore, the SyAAF crest painted on the aircraft’s nose was probably not applied to any operational aircraft either. The aircraft has R-3S air-to-air missiles beneath its inner underwing pylons, plus UB-16 unguided rocket-pods attached to the outer pylons”. I fyou compare the picture by Tommy Vicard (the one in the middle at pag. 63) with the ones I took in 2008, you will notice that the aircraft has been repainted. Actually, it currently has a colour scheme that was never used in the past. Among the many drawings in the book, showing the different camouflaged Mig-21 of the SyAAF from the ’60s to the ’80s, there is none similar to the one currently applied to the machine exhibited in the Museum. 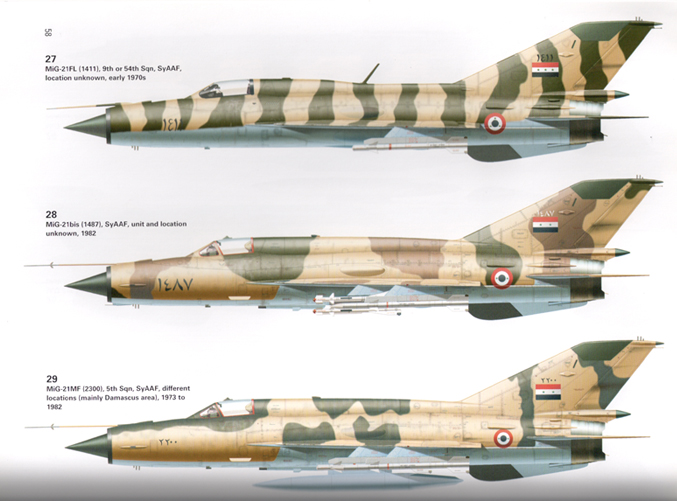 The “Enemy side” of the Tishreen Panorama, hosts also some the remains of an Israeli F-4 Phantom downed in Lebanon (unfortunately, ther 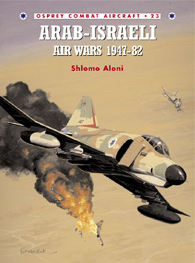 e’s no way to identify it since no serial is readable), a SUU-30B/B dispencer, an underwing tank used by both F-4s and F-15s (since it is in almost perfect conditions it was possibly jettisoned by an F-4 during a low level attack) and the wreckage of a unknown aircraft (most probably a Mystére IV or a Vautour II), whose pictures, again, 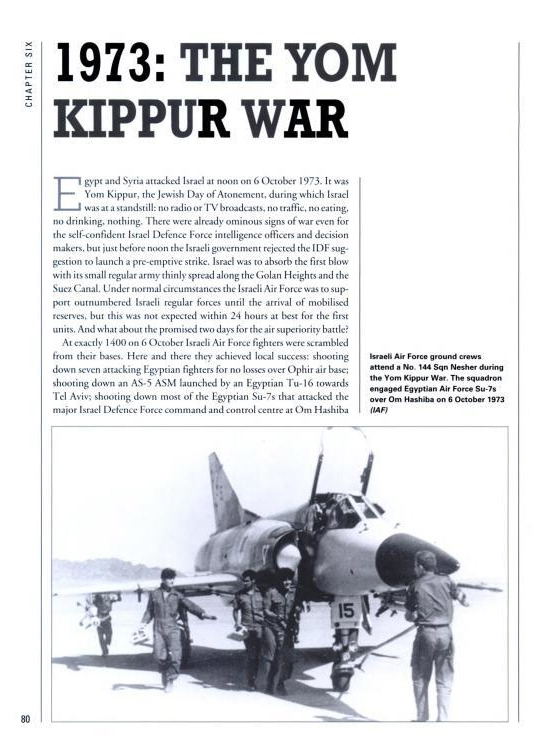 can be seen here. First published in 2001 (three years before “Arab Mig-19 and Mig-21 units in combat” was published), Arab-Israeli air wars 1947 – 82 is another Osprey Publishing title discussing the history from the establishment of the first proper Israeli Air Force in 1948 to the Israeli invasion of Lebanon in 1982, and analysing the Yom Kippur War with a dedicated chapter. Written by Shlomo Aloni, the book (Paperback; February 2001; 96 pages; ISBN: 9781841762944) has the same features of the Osprey Combat Aircraft series: histories, colour artworks, scale drawings and photos. If “Arab Mig-19 and Mig-21 units in combat” book provided a detailed view of the Arab air forces, the “Arab-Israeli air wars” title is instead focused on the Israeli operations. Dealing with the 1973 war, Chapter 6 is dedicated to the conflict, with a concise text explaining the key facts of the war. Absolutely interesting is the description of the very first mission of Shlomo Shapira, the commander of the Israeli Super Mystère squadron: “We were scrambled to the north and got as far as Natanya. The we received a change of mission to rush (south) to the (Suez) Canal. So we rushed to the Canal and got as far 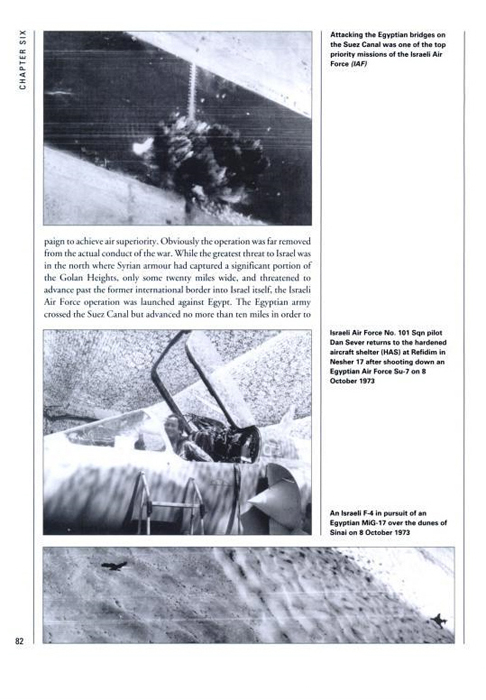 as the area of Gaza, and then the controller once again changed our direction. He frantically ordered us north to Mount Hermon. On our way it was explained to us that (Syrian) forces were approaching the (Israeli) strongpoint which was ours but it had possibly been abandoned by its crew. Our guys were inside the bunker and our target was to attack enemy forces. Everything out there was the enemy except for the tank. We mainly attacked targets to the north of the strongpoint, whule there was a fair mess because the Syrians were firing quite a lot of mortars. There was also a SAM threat…..My four ship formation returned safely and I think that we did some damage but we did not save the strongpoint.
The Chapter contains some rare images: gunsight camera sequences and pictures taken by reconnaissance aircraft during recce missions. Noteworthy, even on Israeli side there are a lot of images depicting Egyptian Mig-17 and Mig-21 shot down but not many images of the Syrian aircraft: another evidence that the SyAAF is an extremely secretive air force…..

U.S. Marine Corps Planning F-35B Deployment to CENTCOM Area Of Responsibility To Get “First Taste Of Combat” In 2018

The USMC may have their “baptism of fire” with the F-35B next year. The F-35B, the STOVL (Short Take Off Vertical Landing) variant of the Lightning II 5th generation aircraft is expected to deploy to […]