In order to investigate the causes of the large hole that compelled the QF30 to perform an emergency landing in Manila Ninoy Aquino International Airport, the Australian Transport Safety Bureau (ATSB) sent 4 investigators to the Philippines to conduct a detailed inspection of the aircraft. Both Qantas, the US National Transportation Safety Board, Boeing Company and Federal Aviation Administration are sending teams of engineers to the site to inspect the B747-438.
In the meanwhile, passengers flying on the Qantas flight from Hong Kong to Melbourne have been recounting the moments after the Jumbo blew a two-metre hole in its fuselage below the First Class.

Qantas passenger Phill Restall, from Chippenham in the UK, describes how he was woken by a loud bang on flight QF30 to Melbourne which was forced to make an emergency landing after leaving Hong Kong.

I was asleep in the business section of the plane. All of a sudden there was a loud bang which woke me up with a jolt. There was a mist coming through the cabin and the oxygen masks discharged.

The cabin crew shouted to everyone to put them on, then they sat down.

We wearing them for about 15 minutes until we descended.

We went down very rapidly to equalise out the pressure.

I guessed it was going down a bit faster than usual. From the little knowledge I have of these things I thought that was what the pilot was doing.

No-one panicked, there was no screaming. It wasn’t your typical television movie. Everyone listened to the cabin staff.

It was never out of control. Hats off to all of the Qantas staff.

That appeared to be the end of the story.

The pilot came on and said one of the door’s had “popped”.

Most of us thought “unhinged” rather than not there.

He then said we were going to land in Manila to see what damage had occurred.

Everyone was fairly calm partly because we didn’t realise the extent.

I was by a window and could see two engines and both were spinning and that was good news as far as I was concerned.

Once we had landed and started to disembark it was obvious something major had happened.

The hole was wedged up by the luggage.

It dawned on a lot of people that this was a major incident. There were 350 people up there who were very lucky.

Seeing the hole caused a lot of emotion. People were physically shaking.

I think many people realised how close they were to their own mortality.
Story from BBC NEWS:
http://news.bbc.co.uk/go/pr/fr/-/2/hi/asia-pacific/7525233.stm

For sure, an emergency descend from 29.000 feet to 10.000 feet must be a thrilling experience, especially if it occurs just after hearing a large bang followed by wind a debris rushing into the cabin, with oxygen mask falling from the ceiling as described by any in-flight safety video.
However, since depressurization takes slightly more than 1 minute at that altitude to lead passengers to loss of consciousness, it is paramount to bring the aircraft to the lowest safe altitude (where air is breathable and temperature is hotter) in the shortest time possible. The aircraft started the controlled dive with idle thrust and speed brakes on. The pilot announced the emergency descend, declared the emergency to the ATC and checked the TCAS for any traffic in the vicinity while the 747 descended with a high angle of ramp.

In case of depressurization, masks should automatically drop. According to The Age (www.theage.com.au) most of the oxygen maskes on Qantas 30 failed:

A TERRIFYING picture emerged yesterday of frantic passengers struggling to use faulty oxygen masks as Qantas flight QF30 dropped 19,000 feet when an explosion ripped a hole in the plane’s fuselage.

Passengers arriving at Melbourne International Airport told of desperate attempts to put their passports in their pockets in case the plane crashed, of children turning blue as their mothers frantically tried to fit their oxygen masks, and of 10 minutes of sheer terror as the plane dived.

As passengers were reunited with loved ones, aviation experts offered several theories about possible causes of the mid-air explosion, including:

* Corrosion and weakening of the plane’s aluminium skin, making it susceptible to bursting under the enormous pressure of cruising at altitude.

* A deliberate or accidental explosion caused by something in a passenger’s luggage.

However, a source close to the Civil Aviation Safety Authority said exploding oxygen cylinders were the likely cause of the rupture, and would be the main focus of the investigation, as they were stored in the exact location of the explosion and there were no signs of fire.

“The oxygen masks were f—-d,” Mr Saunders told The Sunday Age at Melbourne International Airport, after an emotional reunion with his mother and sister.

“The elastic was so old that it had deteriorated … I was trying to get my passport, and every time I got my passport the mask fell off and I started to pass out.”

In some parts of the cabin, the masks didn’t drop down at all: “A guy just went into a panic and smashed the whole panel off the ceiling to get to the mask.

“The kids were screaming and flailing … Their cheeks and lips were turning blue from lack of oxygen.”

Another passenger, Paula Madejon, said she had to share her mask with two other people, and, in the row behind her, nobody had a mask.
…….

New close-up pictures of the VH-OJK damage have been disclosed. One of the most interesting is the following one that was made available on the BBC website. 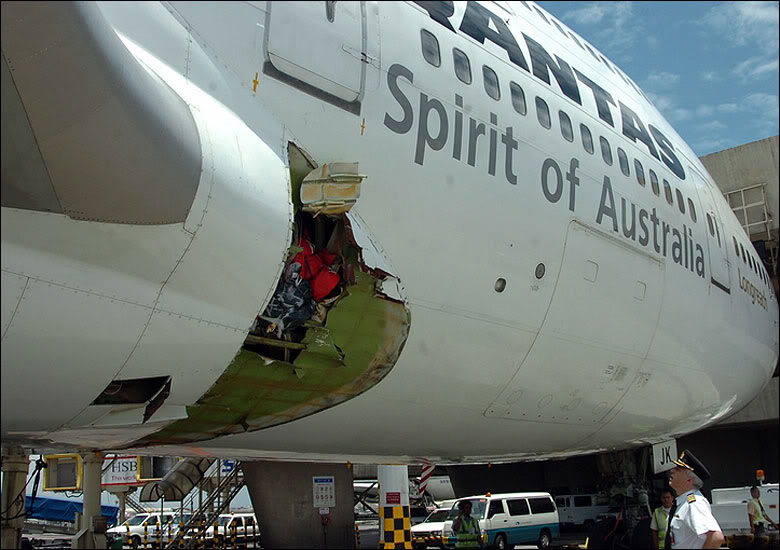 It sure looks like the hole was caused by some sort of internal explosion more than metal fatigue. There are no burn marks and it doesn’t look like an incendiary type explosion. The sharp edges point outward: pressure that caused the how came from the inside. In that area an oxygen tank is normally placed. It is possible that the bang heard by the passengers (and the following oxygen mask failures) was caused by the the tank exploding. Possibly, corrosion could cause this type of problem, even if the damage on the Qantas 747 does not interest the whole fairing or the area where it comes in contact with the skin of the aircraft (where corrosion could occur).

If you thought that just dropping an inert weapon during a test to validate a specific platform or procedure was an easy and safe task, you were wrong. The following video shows a series of […]