On Jun. 1, 2008,  at 15.15LT, an NH90 helicopter, serialled MM81519 EI-202 of the 1 Gr Sq of the Italian Army based in Viterbo crashed in the Bracciano Lake causing the death of Cap. Filippo Fornassi. The other 2 POB (People On Board) were rescued and survived the injuries.

The aircraft was at the end of its display in the Ali sul Lago airshow in front of the Italian Air Force Museum, at Vigna di Valle airport.

I was attending the show when I saw the helicopter performing a fiesler with an apex at low altitude: as soon as the aircraft’s nose was diving towards the lake, I understood that the pilot could not recover the chopper before touching the water. The helicopter touched the surface of water and broke up in many pieces before ditching. Many amateur videos of the accident, are available on Youtube too.

I took the following pictures during the accident (images are copyrighted and have a watermark because they can’t be used for any purpose without prior permission). 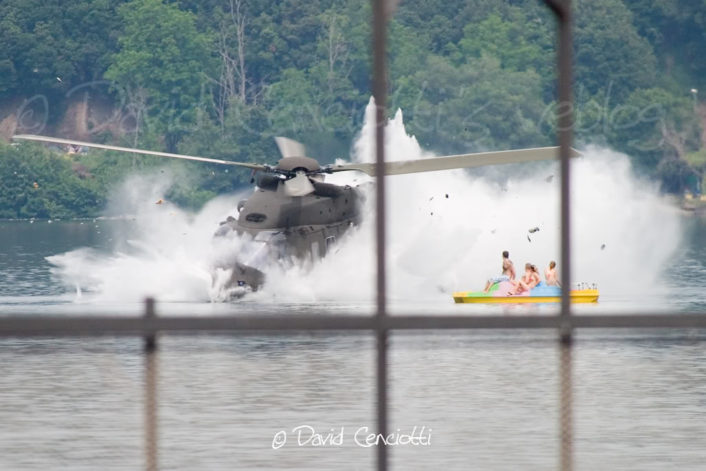 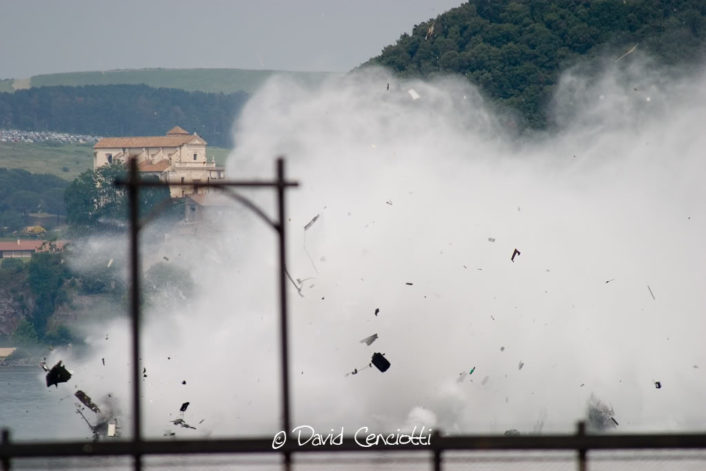 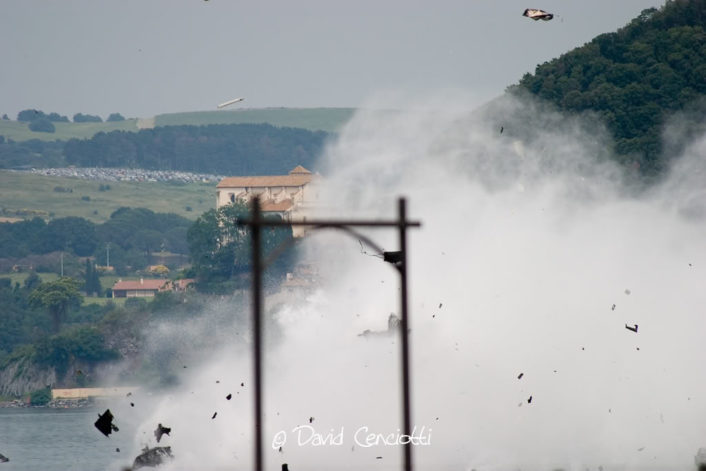 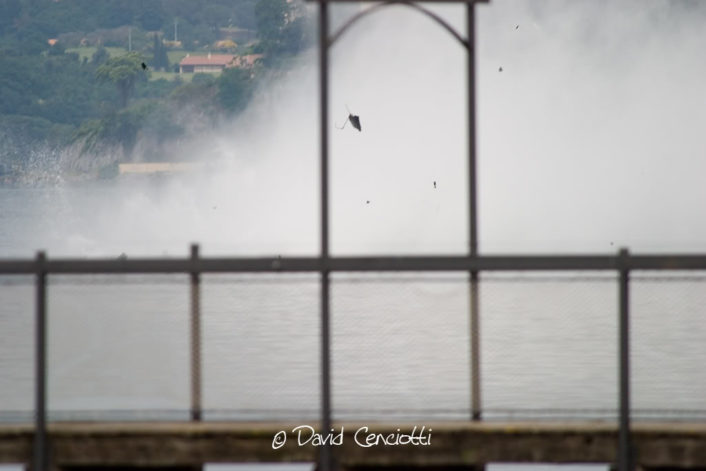 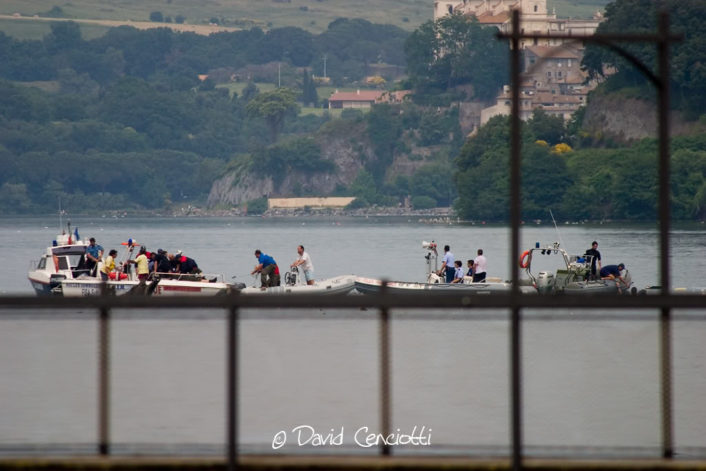 In the aftermath of the accident involving the Italian Army NH90 crashing into the waters of Bracciano Lake, I was asked hundreds of questions. People who met me wanted to know what I had seen, others sent me an email, an SMS, other reached me on the telephone, many left a comment on this site. On June 2, some 9.000 unique visitors read the post on the NH90 accident with the image of the aircraft passing by the paddle boat before ditching and 15.600 have read the post since then. The question has always been the same: “what happened and why?”.

It is extremely difficult to answer. There’s an investigation in progress and it will provide the correct (and only answer). What I can say is what I saw and what I thought watching the aircraft performing its last maneuvers. They obviously represent my very personal ideas. So I think it is better to recall what I experienced and saw, because any other hyphotesis could not be confirmed until the final report will be released.

“I was attending the show along with many friends. We stationed to the right of the Italian Air Force Museum near the gate of the Vigna di Valle base, some 3 meters from the water. The weather conditions were not perfect: the sky was overcasted, ground temperature was around 25° C and humidity was very high. At around 15.03 the Frecce Tricolori made the last passage and 5 minutes later the NH90, coming more or less from Anguillara, began its display in front of the public. We were amazed by the show provided by the helicopter, it looked to many of us much interesting, since the helicopter flew closer to the public than in a normal airshow.

At around 15.15 the NH90 made a turn in front of us, from our left to the right, accelerating.

Seconds later the aircraft flying low level climbed to perform a fiesler. The apex of the maneuver looked low to me and, as the aircraft was diving, I realized that it was almost impossible it could recover before hitting the water.

I remember seeing the chopper, nose high in a desperate attempt to level off before the water and then seeing it almost exploding in myriad pieces.

I could not believe what I had just witnessed and I was shocked like all the other spectators“.

The accident immediately reminded me the Su-27 crash that occurred on Sept 9, 1990 at Salgareda, near Treviso, when the Lithuanian astronaut and test pilot Rimantas Antanas Stankevicius misestimated a loop meneuvre that he could not complete before crashing into the ground.

Here’s a documentary dealing with that accident with some footage.

I think the root cause of the NH90 crash could be the same. I obviously don’t know whether the helicopter experienced a failure during the display or not. I however had the feeling that the fiesler had a low apex. In order to have an idea of the expected altitude of that maneuver just have a look at the Youtube video of the NH90 display in Pratica di Mare, a week before the accident.

Around 4:23 minutes of the above video, you see the aircraft starting the same maneuver. A few seconds later it seems to reach a higher altitude than that reached during the display above Bracciano Lake.

Perhaps, during the tragic display, the NH90 began the maneuver at a lower altitude (or speed) and was not able to complete it.

Giovanni Maduli, one of my co-workers, sent me the following picture he took at Bracciano a few minutes before the NH90 EI-202 crashed into the Bracciano Lake causing the death of Capt. Fornassi. The picture was taken with a Canon EOS D20 with a Canon EF 100-400mm f/4.5-5.6 L IS USM lens (400mm, ISO 200, F/5.6, 1/1250s). It is particularly interesting cause it shows all the three crew members inside the cockpit. Even if I took many pictures of the aircraft before it crashed (see some of them here) no one was so detailed to show also the third member of the crew seated behind the two pilots (you can actually only see his hand and knee in the following picture). 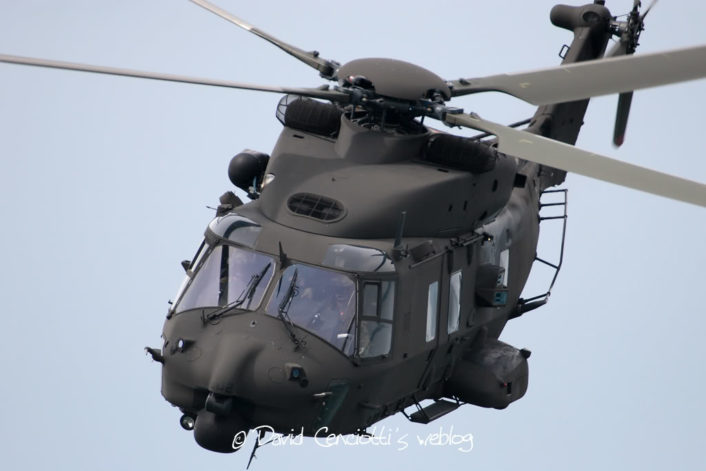