Images Emerge of Possible Object in Close Proximity to Intake During May 17 Crash.

A collision with a bird in flight after takeoff may have contributed to the crash of a Canadian Force CT-114 Tutor single-engine jet trainer belonging to the Snowbirds on May 17, 2020, Sunday in Kamloops, British Columbia. The accident claimed the life of Capt. Jennifer Casey, the Snowbirds Public Affairs Officer and injured Capt. Richard MacDougall, the pilot of the aircraft.

A preliminary report released today, Monday, June 1, 2020, by the Canadian Forces said, “A detailed analysis of video footage recovered for the investigation revealed one bird in very close proximity to the aircraft right engine intake (see red circle in picture above) during the critical phase of take-off.” The preliminary remarks went on to read, “The investigation is focusing on environmental factors (birdstrike) as well as the performance of the escape system.”

The Snowbirds CT-114 Tutor that crashed was part of a two-aircraft formation takeoff participating in an Operation Inspiration flight in honor of health care workers and first responders during the COVID-19 pandemic.

Video taken by viewers from the ground showed the aircraft take off in a two-ship formation as left wing, pitch up shortly after takeoff, bank left, enter a vertical descent in close proximity to the terrain, roll once, and then impact the terrain almost instantly after two ejection seats can be seen leaving the aircraft. The aircraft landed in the front yard of a house close to the airfield.

The two crew members landed in the same area after egress from the aircraft. Capt. Jennifer Casey did not survive the ejection and descent to the ground. Capt. Richard MacDougall survived but was injured. He was recently released from the Royal Inland Hospital in Kamloops and has returned to his hometown to continue his recovery.

The preliminary crash investigation report also reads, “On 17 May 2020 the Snowbirds air demonstration team was scheduled to depart Kamloops, BC to reposition to Comox, BC as part of Operation INSPIRATION, an operation undertaken by 431 (AD) Sqn to travel around multiple sites across Canada to support COVID-19 front line workers. Aircraft CT114161 was #2 of a formation of two CT114 Tutor aircraft. Two occupants were on board the aircraft, the pilot and the team’s public affairs officer. After take-off aircraft CT114161 was observed gaining altitude and departing the formation. Shortly thereafter, the aircraft initiated a left turn, followed shortly by an abrupt steep nose low attitude. Both occupants subsequently ejected from the aircraft.”

The Canadair CT-114 Tutor is a small, straight-wing, single-engine, two-seat jet training aircraft that first flew in 1960. Only 212 of the aircraft were produced. It has been used by both Canada and Malaysia. It was retired from Canadian Forces flight operations as a primary jet trainer in 2000 when it was replaced by the more advanced CT-155 Hawk and by the CT-156 Harvard II. Since its retirement from the jet training mission in Canadian service, it has only been flown by the Snowbirds jet demonstration team and by Canada’s Aerospace Engineering Test Establishment (AETE).

According to a June 1, 2020 story by journalist Amanda Connelly for Canada’s GlobalNews.ca, the crash, “has prompted questions about whether the aging fleet should be retired and also about the safety and reliability of the ejection system used in the planes.” 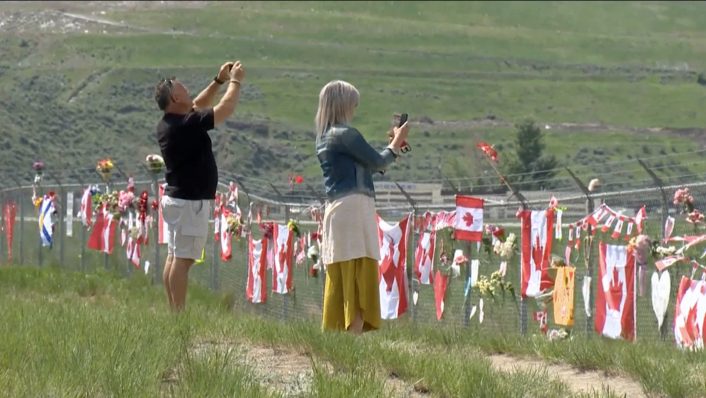 Reports: Pilot Escaped Without Injury, Cause of Crash Under Investigation. A Canadian Forces CT-114 Tutor jet trainer belonging to the 431 Demonstration Squadron, The Snowbirds, crashed before an airshow performance this afternoon at approximately 1:30 […]

Tutor crash is the second in 7 months for the Canadian demo team. A Canadian Forces CT-114 Tutor jet trainer belonging to the 431 Demonstration Squadron, The Snowbirds, crashed shortly after take off earlier today […]