The incidents involved an Apache AH1 and an AB-206 Jet Ranger III.

If you happen to see an Apache parked in a field in Lincolnshire, don’t worry! Due to a technical issue, the crew made a precautionary landing in a field. Our engineers are looking at it now. They may have to weather out the coming storm though before it comes home! 💨 ☔️ pic.twitter.com/C2KVPnVFDH

The WAH-64D, British version of the US AH-64 attack helicopter,  was performing a routine training flight over Lincolnshire on February 8, 2020 when, due to a mechanical issue, the crew decided to make a precautionary landing in a field, before calling in for assistance. The helicopter belongs to the 3rd Regiment Army Air Corps, the British Army’s deep strike Attack Helicopter Battlegroup.

For those following our aircraft in Lincolnshire, #StormCiara gave it a good go but the #Apache just shrugged it off. We can now get on with in depth engineering inspections and decide whether to fix it in place or move by road.

Some moody sunrise shots after the rain cleared! pic.twitter.com/bagVaNPyeb

The incident was reported with regular updates on Twitter by the Regiment’s Commanding Officer. According to his tweets, the Royal Electrical & Mechanical Engineers (REME) were called in to diagnose the problem and verify if it could be fixed in place. The inspections had to be temporarily halted because of Storm Ciara, the extratropical cyclone that is moving over Europe causing significant disruption and, sadly, claiming some victims in the process.

The #Apache recovery from Lincolnshire is almost done. Out of the mud, stripped for road move and lifted onto the road ready for the trailer and a ride home.

Solving problems in the field is what our @CO7BnREME engineers do best (as well as fix helicopters!). pic.twitter.com/FMail8xbuW

The helicopter was secured and tethered to the ground and didn’t suffer any additional damage, other than having its wheels stuck in mud. For safety reasons, it was decided to move the helicopter by road and, after being stripped down of its main rotor and its payloads (which included an auxiliary fuel tank, a pod for 2.75-inch CRV7 rockets and two M299 Hellfire missile launchers), the Apache was moved out of the mud and loaded on a flattop trailer in the morning of February 13. 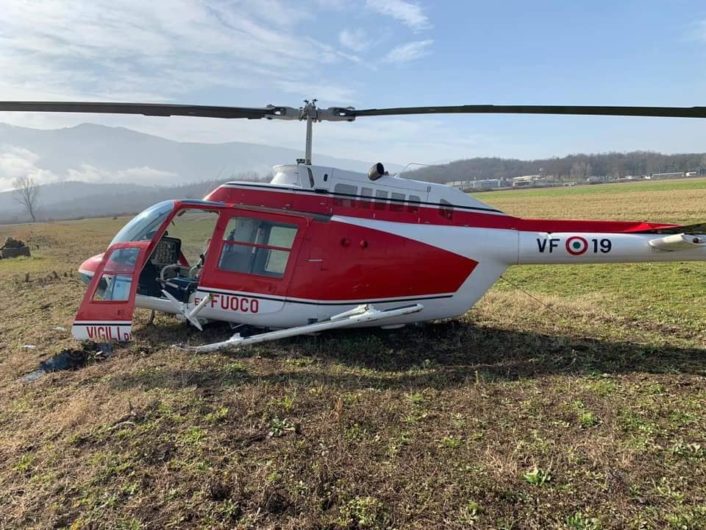 Even though it belongs to the National Fire Corps, the Jet Ranger involved in the incident in Italy is attached to the Italian Air Force’s 72nd Wing, which is the unit devolved to the training of all helicopter pilots of the Italian Armed Forces and Law Enforcement agencies. The AB-206, Italian license-built version of the Bell 206, was performing a training flight from its homebase at Frosinone when the pilots, an instructor of the ItAF and a Fire Corps’ trainee pilot, had to make an emergency landing in a field.

The landing skids were crushed following the impact, leaving the Jet Ranger’s belly leaning on the ground, and the forces to which the main rotor’s blades were subject caused a tail boom strike. Luckily, the pilots escaped unscathed but were taken to the hospital as a precaution. According to some local news outlets, the helicopter lost its engine power before the landing so, if that’s correct, what we can see in the photos could be the result of a successfully executed autorotation, an emergency procedure used to land an unpowered helicopter by exploiting the airflow passing through the rotor to perform a controlled descent for an emergency landing.

About Stefano D'Urso
FacebookTwitterinstagram
Stefano D'Urso is a freelance journalist and contributor to TheAviationist based in Lecce, Italy. A graduate in Industral Engineering he's also studying to achieve a Master Degree in Aerospace Engineering. Electronic Warfare, Loitering Munitions and OSINT techniques applied to the world of military operations and current conflicts are among his areas of expertise.

U.S. Army Successful Test Of Weaponized Laser on AH-64 Helo May Suggest A New Application In The Anti-Insurgency War

High Energy Weapon Shows Potential in Effectiveness and Precision In Anti-insurgent Operations But May Be Vulnerable to Countermeasures. U.S. defense contractor Raytheon conducted a successful, highly publicized, precision firing of a weaponized laser weapon from […]

Leonardo successfully tested the integration of the UAV control station into the Wildcat Mission System. On Sept. 17, 2020, during Manned-Unmanned Teaming (MUMT) trials between an AW159 Wildcat helicopter and a semi-autonomous UAV from Callen-Lenz […]

At 10.00 am local time on Mar. 8, the walls of a compound near Birnin-Kebbi, North West Nigeria, came crashing in: it was the start of a combined operation between British and Nigerian troops to […]