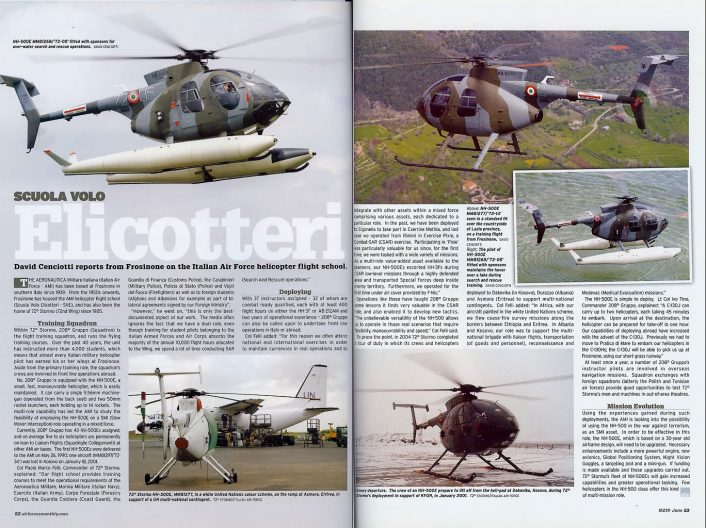 The Italian helicopter school, the 72nd Stormo (Wing), is quite an atypical unit in the Aeronautica Militare (Italian Air Force, ItAF). In fact, despite not being structured like the classic OCU (Operational Convertion Unit), it keeps its training role while undertaking operative missions abroad in Peace Keeping/Enforcing Operations. The 72nd Stormo is equipped with NH-500Es, a platform that can best be described as versatile: it is small, fast, maneuverable and is an easyily maintainable aircraft that can also carry light armament. For all these reasons, the Italian Air Force is studying the possibility of employing it within a mixed force focused in the SMI (Slow Movers Interception) role.

David Cenciotti went to Frosinone to describe the present and future of the only Italian School involved in the so-called out-of-area operations.

Frosinone is a small town located at the beginning of the Appennines more or less mid way between Rome and Naples. Its recent history is strictly tied to the Italian aviation industry: the Aeronautica Militare is a relevant presence in this mainly agricultural area since1939, as well as the Agusta whose hangars and parking areas are located just outside the fence of the military aerodrome. Since the ‘50s, the airport, that is one of the few in Italy to keep the characteristically outmoded oval shape, is the home base of the ItAF helicopter school, previously named Scuola Elicotteri and since 1985, 72nd Stormo. The main component of the 72nd Stormo is the 208th Gruppo (Squadron), a flight unit whose courses were attended by more than 4,000 pilots in 40 years, proof that almost every Italian military pilot flying with the choppers earned their wings at Frosinone.

However, even if the training role continues to be the main role of the 208th Gruppo, its crews are often involved in real operations abroad. Currently, the squadron operates with 43 NH-500E out of the 50 delivered by the Breda-Nardi in the early ‘90s: one was lost in Kosovo on January 18th 2001 (MM81297 “72-34”) and, on average, 5 or 6 helicopters are permanently on-loan to the Squadriglie Collegamenti (Liaison Flights) of the various airbases. As explained to the AFM by the Commander of the 72nd Stormo, Col. Paolo Marco Felli: “Our flight school provides training courses to meet the operational requirements of both Aeronautica Militare, Marina Militare (Italian Navy), Esercito (Italian Army), Corpo Forestale (National Rangers), the Guardia Costiera (Coast Guard), the Guardia di Finanza (Custom Police), the Carabinieri (Military Police), Polizia di Stato (Police) and Vigili del Fuoco (Firefighters) but also to foreign attendees (Afghans and Albanians for example) as part of bi-lateral agreements signed by our Foreign Ministry.

But this is only the most advertised aspect of our work. It is often ignored by the mass media that we have a dual role:even though training of student pilots belonging to the Italian Armed Forces and Air Corps absorb the majority of the 10,000 flight hours yearly allocated to the Wing, we spend a lot of flight hours in SAR (Search And Rescue) operations”. Counting on 37 instructors, 32 of which are Combat Ready pilots with a curriculum vitae of at least 400 flight hours on the HH-3F or AB-212AM and 2 years of operative units, the 208th Gruppo can also be called upon to undertake real operative missions, in Italy or abroad. “For this reason we offen attend national and international exercises, in order to maintain currencies in real operations and to integrate with other assets within a mixed force comprising various assets, each dedicated to a particular role: in the past we were deployed to Sigonella to take part in the “Mothia” exercise while last year we operated from Rimini in the“Pixie” Combat-SAR exercise.

The participation in the “Pixie” was particularly valuable for us since, for the first time, we were tasked with a wide variety of missions: as a multi-role value-added tool in the hands of the planners, our NH-500E escorted the HH-3F during C-SAR missions low level through a highly-defended area and transported the Special Forces deep inside the enemy territory. Furthermore we operated for the first time under the air cover provided by the F-16s”.

The experience gained in this kind of operations enabled the 208th Gruppo to collect some important “lessons learned” that will be used by the Squadron to specialize in the C-SAR role and to develop new tactics: “The unbelievable versatility of the NH-500 allows us to operate in those real scenarios that require flexibility, maneuverability and rapidity”. As a proof of this concept, the 72nd Stormo ended in 2004 a tour of duty that saw its crews and helicopters deploying to Dakovika (in Kosovo), Durazzo (Albania) and Asmara (Eritrea) to support Multinational contingents. “In Africa, with our aircraft painted in the white color of the United Nations, we flew missions to surveil on the ceasefire along the borders between Ethiopia and Eritrea; in Albania and Kosovo our role was instead to support the Multinational Brigade with liaison flights, transportation (of goods and personnel), reconnaissance and also MEDEVAC (Medical Evacuation) missions”.

With a background of positive experiences gained in those demanding scenarios, nowadays the ItAF is studying the possibility of using the NH-500 in the asymmetric war against terrorism, as a SMI (Slow Mover Interception) asset. Obviously, in order to achieve an effective employement in the SMI role the aircraft should be upgraded: not only the first helicopters were delivered to the ItAF on May 26th 1990 (along with two NH-500MD MM81352 and 81353, that were used by the Reparto Sperimentale Volo until 2004 and now belong to the 615th Squadriglia Collegamenti of the 9th Brigata Aerea at Pratica di Mare) but, over all, the weapon system is based on a 30 years old airframe’s design.

Avionics should be enhanced, as well as the engine, that proved to be efficient and reliable but not powerful enough. Furthermore, the only armament that can be carried nowadays comprises a single 5,56 mm Minimi machine gun (that can be operated from the backseat) and two launchers that carry up to fourteen 50 mm rockets (that have been rarely used and only during training missions) but, as a deterrent against light traffic and helicopters, a targeting pod and a Minigun could surely be more effective. With a new 600 HP engine, GPS (Global Positioning System), NVG (Night Vision Goggles) and Minigun this small helicopter could be transformed so as to be the perfect means to defeat any threat flying in the range 0-130 Knots. Unfortunately, this new design would take a certain number of helicopters unavailable for the period required to perform all modifications and would cost a lot of money. As a consequence, an ever shrinking budget could change plans and divert money to other programs and this is probably the reason why the feeling we perceived visiting the 72nd Stormo is that it is a bit too early to talk about SMI at Frosinone.

At least once a year some of the IPs of the 208th Gruppo are involved in navigational missions abroad: the usual Squadron Exchange with foreign squadrons (in the last years with the Polish and Tunisian airforces) are always a good occasion to test the capabilities of the 72nd Stormo to project its men and machines in out-of-area theaters. The NH-500E is a machine that can be deployed abroad quite simply as explained by 208th Gruppo Commander, Lt. Col. Ivo Tino: “A C-130J, that can carry up to 2 helicopters, takes 45 minutes to embark an NH-500. Once arrived at destination, the helicopter can be prepared for take-off in one hour, just the time needed to re-assemble the rotor assembly and the blades. Our capabilities of deploying abroad will increase even more shortly: until the 46th Aerobrigata (Air Brigate) used the C-130H, we were compelled to move to Pratica di Mare to embark our helicopters in the Hercules; in the near future, the C-130J will be able to pick us up directly at Frosinone, landing on our short grass runway”.