F-15Cs Went Supersonic During Intercept of Stolen Airliner as Airspace Secured. Here Are Audio and Videos Of the Intercept.

In a bizarre incident originating from Seattle-Tacoma International Airport in Washington state an Alaska Airlines/Horizon Air Bombardier Dash 8 twin-engine turboprop commuter airliner was commandeered by a lone male, reported to be an airport maintenance worker, and crashed into the ground on Ketron Island, which is southwest of Tacoma, in south Puget Sound. There were no passengers on board the aircraft. Ketron Island has only about 20 year-round residents according to news outlets. The lone man did not survive and is being reported as the only person killed in the incident.

The aircraft was intercepted by a pair of F-15C Eagles from the 142nd Fighter Wing of the Oregon Air National Guard launched from Portland International Airport. The F-15s “broke the sound barrier” on the way to intercept the stolen airliner according to numerous reports on Twitter and from local Washington state news media. Facebook users reported hearing sonic booms over Eatonville.

Photos taken of one of the F-15C Eagles by aviation photographer Russell Hill taking off for the scramble/interception show them in full afterburner. The F-15Cs were also authorized to launch counter-measure flares during their attempts to divert the stolen Dash 8 commuter airliner and force it to land. Infra-red flares are normally launched by tactical aircraft to produce a heat source as a decoy for heat-seeking missiles.

Rock 41 and Rock 42 scrambling out of PDX this evening pic.twitter.com/6otUX7hkMV

Here are two photographs taken by Bill Shemley of Rock 41 and Rock 42 taking off from Portland. 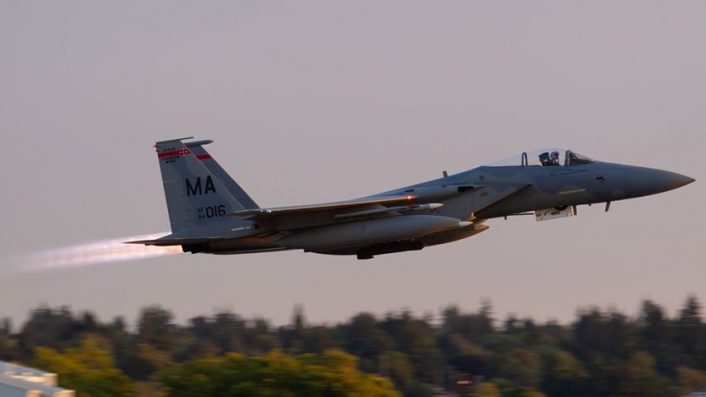 Video posted on Twitter and featured by multiple news media has shown the Dash 8 performing aerobatic maneuvers including going inverted and almost crashing into the sea.

Additional video shows the F-15Cs flying in close proximity to the Dash 8. A reporter from local news station and ABC affiliate WMUR/Channel 9 said that, “F-15s forced the stolen aircraft away from houses out over less populated areas.”

Some dude stole a plane from #Seatac (Allegedly), did a loop-the-loop, ALMOST crashed into #ChambersBay, then crossed in front of our party, chased by fighter jets and subsequently crashed. Weird times. pic.twitter.com/Ra4LcIhwfU

KHQPETERMAXWELL: RT TheAviationBeat: ATC Audio from the stolen Horizon Air Q400: “I think I am going to try to do a barrel roll and if that goes good then I am going to go nose down and call it a night.” pic.twitter.com/dLl539ASsA

Transcripts of radio communications from scanners suggest the man who stole the Dash 8 was not a pilot and had only practiced flying on a simulator. He spoke with air traffic controllers who were trying to convince him to attempt to land the aircraft.

Air traffic in the region was halted during the incident but has since been resumed. Significant delays out of Seattle Tacoma Airport are being reported.

This photo shows the largest C-130J formation ever flown

Twenty C-130Js belonging to the 317th Airlift Group from Dyess Air Force Base, Texas, set the world record for the largest C-130J formation ever flown in a single formation. As said, this was a Super […]

New Bomber Crew Stayed with Aircraft After Ejection Seat Failed. In a stunning story of split-second decision-making under pressure, heroic, selfless action and remarkable airmanship, the drama of what really happened in a burning B-1B […]