With the exception of the occasional echoing thunder of jet noise, the desert is silent here.

Snakes and big desert jackrabbits are common. There are vultures, and the dead animals that feed them. But little else. Sunburned, gentle wind blows sand between low scrub. This vast desert test range sits empty, hot, dry and silent. If you want to walk here you need to carry plenty of water, a compass, a sun hat and a snakebite kit. It’s not a good area for hiking, and it isn’t allowed anyway as one of the nation’s largest and most secure military test ranges.

Trailing hot, black fuel-fire smoke a giant triangular platform of damaged white metal the size of a large building saucers oddly downward from the brilliant blue sky. Individual fragments with tails of smoke begin to rain into the sand, sending dust plumes skyward on impact. A shower of titanium shards, aluminum fragments and bits of torn honeycomb pepper the ground. Overhead thunder- the sound of an explosion- echoes down to the desert floor. The giant white triangle, 85 feet across, just about 20 feet short of its original width, caroms into the sand with a low, hollow “whomp” as black fuel smoke billows from underneath. Sand, dust and rock shatter outward, then bounce back into the desert trailing smoky spirals.

The desert goes silent again with the exception of small flames crackling on some of the burning fragments. About a mile away a single orange parachute pendulums back and forth as it flutters downward in the hot air. The man at the bottom holds his broken left arm. He tumbles painfully to the earth as his parachute deflates, landing in the sand.

It was 51 years ago this summer that one of the most bizarre accidents in aviation history occurred, the midair collision and crash of a prototype North American XB-70 Valkyrie bomber, aircraft number 62-0207, one of only two built. The aircraft collided with a civilian registered F-104N flown by famous test pilot Joe Walker, who tragically died in the accident.

The XB-70 was flying in formation as part of a General Electric company publicity photo shoot outside the Edwards Air Force Base test range in the Mojave Desert, California. It flew with a two-seat T-38 Talon, an F-4B Phantom II, an F-104N Starfighter and a YF-5A Freedom Fighter.

As the photo shoot progressed safely for 40 minutes there were no problems, but toward the end of the shoot Joe Walker’s NASA registered F-104N Starfighter got too close to the right wing of the XB-70, collided, sheared off the twin vertical stabilizers of the big XB-70 and exploded as it cartwheeled behind the Valkyrie.

Seconds after the collision the XB-70 departed controlled flight and began to break up. Large sections of it rained into the desert near Edwards.

That is why we were surprised to spot this eBay auction from a seller of Arizona City, Arizona. We’ve seen everything from ejector seats to drop tanks and even complete collections of combat aircraft for sale on eBay, but this is the first time we’ve seen what is claimed to be a large section of the crashed XB-70 aircraft #62-0207. The auction appeared authentic. The large fragment appears to be from the underside of the left wing on the XB-70 and includes part of the large “USAF” insignia. The honeycomb composite construction of the aircraft’s wing is clearly visible. 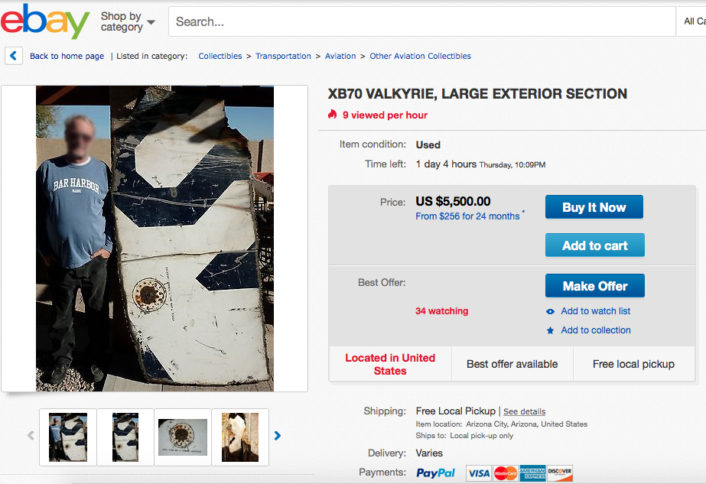 We contacted the seller on eBay with questions about the large wing fragment, where it came from and how they got it. We never received a reply to our inquiry. That same day the auction disappeared, “Ended” by the seller.

When we used the search function on eBay to find other artifacts from the XB-70 crash site we got lucky. We found a nice sized fragment claimed to be from the XB-70 by another seller. We won the auction in the final seconds of bidding for only $83.00 USD.

When we received the fragment just a few days later we did our best to verify its authenticity. Based on photos of the crash scene debris field, the paint used on the aircraft, the technical resources listing materials used and other sources we believe the likelihood is that this fragment is authentic. It is a part of the crashed XB-70 #62-0207, one of only two XB-70’s ever built.

We contacted the seller of the XB-70 fragment we bought and thanked him for selling it on to us. He sent us this rather heart-warming message on eBay:

“Hi, I can’t tell you very much as I bought this item from a fella who lived up in the Lancaster, Palmdale area. I have had the item for over 15 yrs. Evidently when the Air Force was through removing sensitive materials from the XB-70 it was then sold to a local salvage company. They cut up the remains with torches and trucked them to their local facility where I am told they retrieved the silver solder, copper, and metal scrap. Many years passed, the salvage company was long gone, and someone recognized some white XB-70 parts along the perimeter fence line and asked to purchase them. Some were even used for target practice. I was told that one of the workers found my part face down under several inches of dirt. Anyway, I imagine parts were sold and traded over time and eventually I purchased some of them. I have loved the XB-70 since my middle school days in the 60s. I am getting up in years and can’t take it with me. I tried several times to donate it but lots of people see it as scrap; not a pretty display. I see it as a part of aviation history. Hope this helps even though it’s not first hand information. (Name removed)”

We’re not sure where the big wing section from the auction that disappeared wound up. Hopefully it will be on public display somewhere for people to learn about the remarkable history of this aircraft. Perhaps the auction was removed because someone else bought the artifact outside of eBay. It may have been ended by the user or by someone who had a prior claim to the piece of the aircraft. We don’t know. The listing for the large fragment just ended, like the remarkable story of the superbomber that died before it ever entered service over half a century ago.