AvDet 17-2 included a cargo-drop and precise-landing contest as well as tactical sorties, landings on unprepared strips, fighter engagements with the Polish MiG-29 fighter aircraft, and night operations carried out with the use of NVGs (Night Vision Goggles). 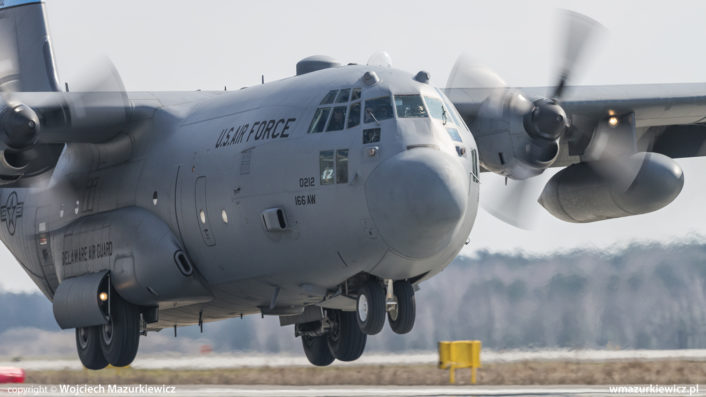 Every sortie began with a mass briefing, during which the formation leader explained and specified the assumptions and objectives of the mission, along with the details of the route and safety and communications aspects concerning the crews.

On the day when Foto Poork’s Filip Modrzejewski visited the airbase, fighter engagement sorties were planned with the involvement of the Polish Air Force MiG-29 jets hailing from the Minsk Mazowiecki airbase, located in the vicinity of Warsaw.

The goal of such sorties was to allow the Fulcrum pilots to refine their intercept skills, while allowing the Hercules crews to deal with enemy fighters by proper route planning and tactical maneuvers.

Modrzejewski was given the opportunity to fly aboard a Polish C-130 during a mission mainly flown at 14,000 feet (probably, a bit too high to avoid interception). The Hercules crews claimed that even though the MiG-29 radar is not a state of the art system, it has more than enough capability to detect and lock onto an “enemy” Hercules.

The tactics adopted in scenarios as such include tactical maneuvers at high G rates, or complete evasion and avoidance of the areas within which the fighter aircraft remain active. Nonetheless, the airlifters were eventually intercepted by a pair of Fulcrums, and then a short formation flight with the MiGs took place, with the crews enjoying the company of the fighter aircraft. After the “show of force” came to an end, the cargo planes returned to base, with a follow-up debriefing.

Beyond the fighter engagement sorties, cargo drops were performed at night and during the day. In bad weather conditions, the drops were carried out with the use of sandbags, instead of real payload or personnel, to avoid potential losses. The operations took place in the airspace over the 33rd Airlift Base in Powidz. Even though some plans existed to perform sorties over the so-called Błędowska Desert area in Poland, the arrangement was eventually canceled due to adverse weather conditions in that region.

When it comes to the precision cargo drop and landing contest, finalizing the exercise, the crew of the ‘1501’ Hercules aircraft, the very same airlifter that was the first one that has been delivered to Poland exactly eight years ago, won the competition held within the framework of the US AvDet 17-2 training operation.

The competition took place on Mar. 24. 2017 and involved four crews – two from the US and two from Poland. The American airmen, as noted within the official report issued by the Polish MoD, operated the C-130H airframes, whereas the Polish crews were flying the C-130E variant, with the crews including pilots, loadmasters, flight engineers and navigators.

The contest covered the areas of precise landings and precise cargo drops. Polish Air Force’s ‘1501’ airframes, commanded by Cpt. Szymon Gajowniczek, has left the competition far behind, winning in both categories.

In case of the cargo-drop portion of the contest, the winners were able to drop the load 48 meters from the target, 3 meters closer than the American crew managed to do.

In case of the landing competition, the Polish pilots managed to land only 12 meters from the indicated point. Considering the fact that C-130E is 30 meters long, the aforesaid results are very impressive.

The HH-60W is replacing the HH-60G, even if the procurement will be terminated earlier with less helicopters that initially planned. The newest U.S. Air Force combat rescue helicopter, the HH-60W Jolly Green II, has finally […]