On Feb. 18, 2012, a U.S. spy plane crashed six miles from Djibouti International Airport during “a routine flight.” As a consequence, all four U.S. military personnel on board, belonging to the 319th and 34th Special Operations Squadrons, and to the 25th Intelligence Squadron, both based at Hurlburt field, Fla., died.

The accident occurred around 8.00 PM LT.

As usual in similar cases, a special investigation team has been dispatched to determine the cause of the crash.

Noteworthy, the doomed military plane was a U-28A; the U.S. Air Force has 21 such aircraft to perform intra-theater transport of small numbers of special operations troops.

The U-28A (where “U” prefix stands for “utilitarian”), purchased at a unit price of 3.5 million USD from the Swiss company Pilatus, is a militarized version of the PC-12. Although much similar in terms of basic design as the civilian plane, the U-28A is equipped with special navigation equipment, weather radar and other undisclosed equipment.

According to the information released by the Air Force Special Operations Command, depending  on the internal configuration, the aircraft can carry up to nine passengers, or about 3,000 pounds of cargo.

Hard to say what the type of mission the aircraft was flying from Camp Lemonnier, a U.S. forward operating base involved in the recent Special Forces raid to free two Western worker in Somalia, but, according to the first rumors, it looks like the aircraft did not crash as a consequence of any hostile act. 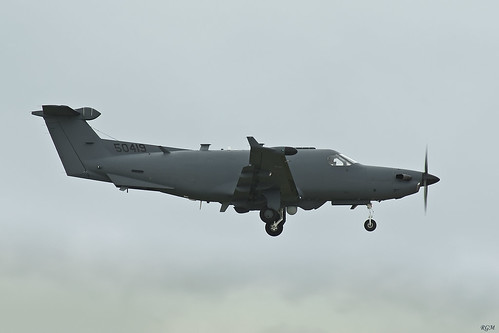 Florida is experiencing unusually cold temperature. High winds and freezing rain, brought by a winter storm coated aircraft in a layer of ice. These images, taken on Jan. 29, 2014, say it all. Since quite […]

Straight from the Cold War. The following is an interesting ’60s propaganda movie about the Convair B-58 Hustler whose purpose was to raise the awareness of the Americans about the U.S. Air Force operations (“jet […]