The two crew members from the 48th Fighter Wing based at RAF Lakenheath UK have recently told CNN’s Barbara Starr of the night they found themselves separated and on the ground behind enemy lines in Libya.

Capt Stark was on his first combat mission and said to Starr “There’s obviously a little bit of nerves in the back of the stomach – it’s kind of like you’re going out for that big football or basketball game and you’re like, wow, this is it. This is the big leagues and I’m going to be flying in combat tonight.”

Harney and Stark took off from their temporary forward operating base at Aviano (Italy) and headed south out over the Med towards Libya and into the Benghazi area, they soon found targets and after releasing their final weapon of the sortie, they turned for Italy when, suddenly, Harney lost control of the Eagle which he described “very much like if you were driving you’re car down the road and you hit a patch of ice and your car starts spinning. That’s exactly what our aircraft at that point was doing.”

Capt. Stark sat in the back described his thoughts at that point as “This is really happening?”

The aircraft falling Stark made his May Day calls and both pilots ejected which was described as s”carey but a life or death decision” once the survival instincts kick in the lever is pulled and the pilots are out of the aircraft.

The two men got separated once under the parachute and landed in different locations neither knowing if they had landed amongst Ghadaffi’s forces they had only moments ago been bombing,  Harney described his feelings once on the ground “I was scared. There’s no doubt in my mind that I was terrified”.

He spent the next several hours hiding trying not to be found by hostile forces whilst trying to contact friendly forces on his radio that is part of the survival kit all pilots take into combat. Harney was lucky and made contact, an Osprey from USS Kearsarge touched down to rescue the pilot, Harney ran towards the aircraft hands raised high so that the Marines knew he posed no threat. After being bundled into the Osprey rather unceremoniously the Osprey dusted off and returned with Harney back to the carrier.

Stark however was not so lucky, he found himself in a field with two vehicles heading to wards his location, shining lights in his hiding place, with little or no chance of escape, stark heard a voice in English saying: “American come out – we are here to help.” Stark described his actions as so “I get up and put my hands up and start walking to the voice” he said. “Once I get there, my impression is, OK you have to assume that they are the bad guys.” He was driven to a near by building still not knowing if the forces were friendly or not.

Stark was taken into the building and found himself in front of a half circle of local people, he described his thoughts at that moment as  “Either this is where the beatings are going to start or this is where I am going to get a lot of help. Fortunately I walked into the room and got a round of applause.”

He was safe, due to the stress and shear terror of the previous hour or so Stark couldn’t remember the number to call for help and with cell phones available the only number he could think of was that of his parents “So I called him up, spoke with my dad and said, ‘Hey, I need you to make a call for me.'” the Libyan people sheltered Stark until an Italian boat arrived to pick him up and take him back to safety.

This article raises a few questions of what could have happened to the Eagle. From photos released by media outlets soon after the jet crashed it was obvious there was little or no forward movement of the aircraft and appeared to have landed vertically. This is what made analysts think it was in a flat spin as the crew bailed out and was at some good altitude as they had time to send a may day call and spend time under the chute. 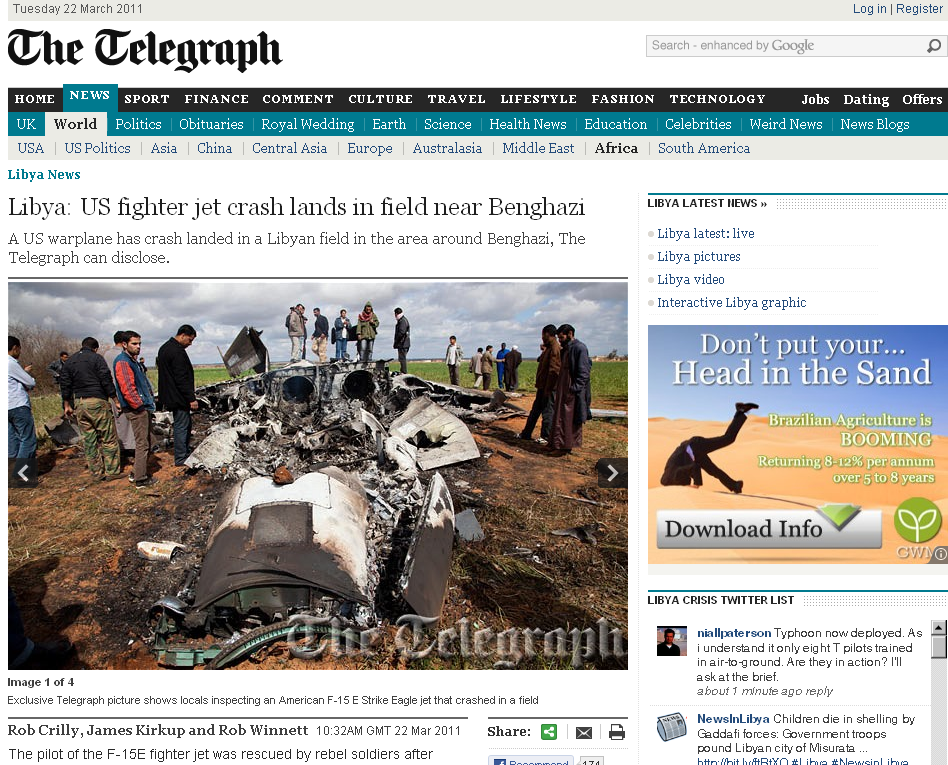 Also what becomes apparent is there is no damage to the jet nozzles at the rear therefore eliminating damage from a MANPAD missile or a heat seeking missile. A radar guided missile however wouldn’t strike the aircraft necessarily at the rear, and the photo’s from the Guardian article above reminded of the crashed hulks of the Mig 29’s shot down during the Balkan conflict during the 90’s victims of AMRAAM’s.

According to the investigation report the Eagle was lost when the pilot performed a manoeuvre outside of the aircrafts flight envelope (whilst unbalanced) which sent it into an un-recoverable spin (during a jinking manover after weapons release).

The crews from Lakenheath regularly undertake intense training in very difficult terrain and certainly handle this beast of a jet with the highest degree of skill. Hence, the issue over Libya must have been catastrophic. And the tension inside the cockpit much higher than in a normal training flight, increasing the risk of pilot error.