Everything you need to know to understand what happened in the skies over NYC and the eastern U.S. during and after the 9/11 terrorist attacks.

Even though everybody know what happened on September 11, 2011, they most probably don’t how the US reacted to the terrorist attack, which aircraft were dispatched to secure the air space and to escort suspect civil liners, from which bases they were scrambled, and how they operated on 9/11, the day United States reached DEFCON 3 level.

Much of the information about the immediate reaction of the U.S. Air Defense can be found in the 9/11 Commission report, that is freely available as a .pdf on the Internet. However, the report doesn’t provide some technical details about the missions scrambled to intercept the hijacked planes nor covers what happened after the United 93 crashed in Pennsylvania.

This article and the following ones will add some details to what is already known and give information that were never disclosed before.

The NEADS, based in Rome, New York, was one of the three sectors of the famous NORAD (North American Aerospace Defense Command), based in Colorado Springs, Colorado. On  9/11 the NEADS could count on two QRA (Quick Reaction Alert – please note this is a UK designation) cells: one at Otis ANGB, Cape Cod, Massachussets, and the other one at Langley AFB, Hampton, in Virginia. As it always happens, other air bases could be called to provide air defense but they would need time to prepare, arm and scramble their planes.

At 08.37 LT, 16 minutes after American Airlines flight 11, a B767 from Boston to Los Angeles, has switched its transponder off, NEADS is notified of the hijacking.

According to the base radar data, the two fighters take off at 08.53 LT, unaware that the American B767 has already crashed. NEADS has been notified around 08.50 LT.

Still lacking confirmed reports about Flight 11, in order to prevent them from interesting the overcrowded NYC airspace, the two F-15s are initially vectored towards a military-controlled airspace off Long Island coast and ordered to “hold as needed”. The interceptors will maintain the holding pattern from 09.09 to 09.13 LT.

At 9.02:59 United 175 crashes into the South Tower of the World Trade Center. NEADS is notified of a second hijacked commercial plane about the time it was hitting the WTC.

While all takeoffs and arrivals to the New York Center are banned, at 09:09 LT the F-16s of the North Dakota ANG were given the order to go to battle station at Langley AFB should the need to relieve the Otis fighters arise.

At 09.13, the two F-15s set a course to Manhattan, after the FAA has cleared the NYC airspace. When they exit the holding pattern, they are 115 miles from Manhattan. They are able to establish a CAP over NYC at 09.25LT.

Between 09.25 and 09.45 the whole US airspace is shut down. No civilian plane is allowed to take off, while all inbound aircraft are instructed to return to their departure airport or to divert to the nearest airport.  4,500 civilian and general aviation flights are affected by the order to land immediately.

Although some believe that the FAA issued the execution order for SCATANA, the Plan for the “Security Control of Air Traffic and Air Navigation Aids”, in order to ground all the air traffic, the emergency plan was not completely implemented as the Defense Department left the air traffic control system in the hands of the FAA and decided to leave all the radio navigational aids still running, so as that the thousands of planes which were aloft in domestic airspace could use them to land or to divert to an alternate destination.

At 09.23 the NEADS orders the scramble of the Langley fighters to have them over Washington where another missing plane should be approaching. At 09:24 the order is processed and at 09.30 three out of four alert F-16s (c/s “Quit 25 and 26”) of the detachment of the 119th Fighter Wing of the Air National Guard, based in Fargo, N.D.,  are airborne (one is left as back up): two of them are armed with both missiles and guns, whereas the third one carried only guns.

The heading of the Langley fighters is adjusted to have them over Baltimore in a defensive position between the south bound hijacked plane and Washington DC. When at 09.36 the NEADS is informed by the Boston Center that an unidentified plane is already approaching the nation’s capital VFR, 6 miles from the White House, the three fighters are vectored directly over Washington DC. Noteworthy, when called to head towards DC, the ND ANG fighters are not heading north, towards Baltimore, as the weapon controller thought, but they are proceeding east bound, towards the ocean. This is due to three reasons (according to the 9/11 Commission report):

3) The lead pilot and local FAA controller incorrectly assumed that the instruction to proceed east for 60 miles had superseded the scramble order.

At 09:38 American Airlines Flight 77, crashes into the Pentagon while the Langley fighters are 150 miles away. What the three F-16 pilots could have done, if they had reached the scene in time, is hard to say. For sure, they did not have the authority to shot down the hijacked plane.

Interestingly, just before it hit the western side of the building, the hijacked aircraft has been followed by a C-130H “Gofer 86” of the ANG, vectored to visually ID the suspicious plane by Reagan National airport shortly after take off. The Hercules pilot saw it, identified it as a B-757 and tried to follow its path from distance. Then it radioed that the civil liner had crashed into the Pentagon:

“OK, We are down to two thousand. And, uh, this is Gofer 86, it looks like that aircraft crashed into the Pentagon, sir”.

The three F-16s are vectored west towards Reagan National Airport, just south of the Pentagon. The three ND ANG F-16s patrolled the skies above D.C. alone for nearly an hour before additional planes arrived from other units, circling the capital for more than six hours into late afternoon.

United 93 crashed in Pennsylvania at 10.03, 125 miles from Washington DC. The flight crashed before NEADS learned it was hijacked.

At  10.39 another missing plane is claimed to be headed for Washington and 1st FW F-15s (“First”) are scrambled to patrol the airspace above the capital. Unlike previous F-16s, they have orders, issued by VP Cheney and confirmed by President Bush, to shot down any hijacked plane refusing to comply to eventual instructions given by radio. 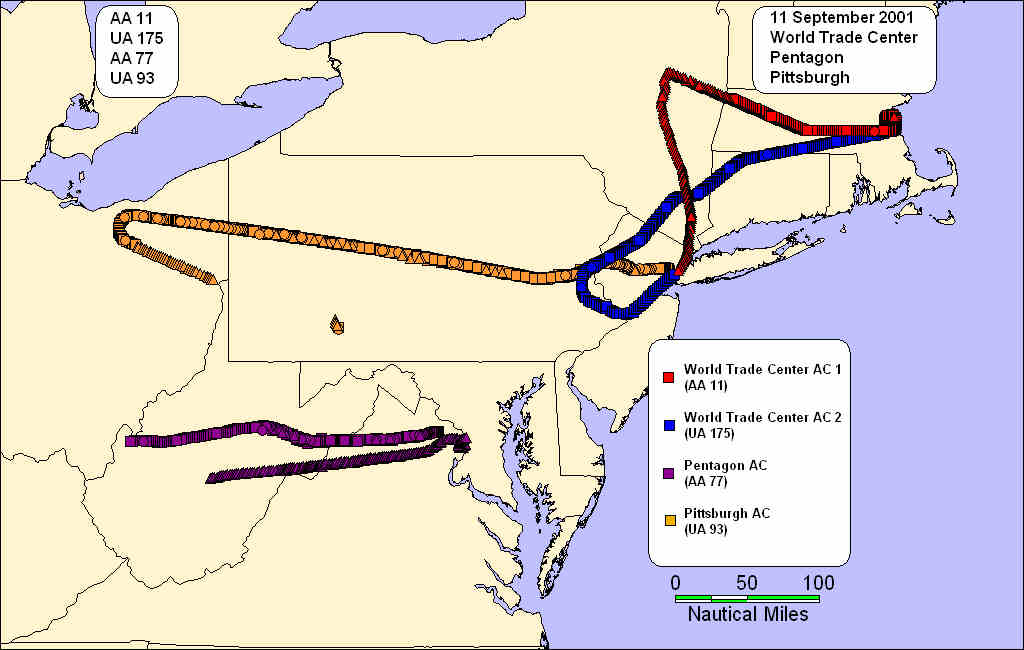 Surely nobody in the US was prepared to face the threat posed by civil planes used as weapons of mass destruction, neither on the military nor or the FAA side. However, even if the defense of the US air space was not conducted in accordance with a plan and protocol, the NEADS had only 9 minutes notice on the fist hijacked plane and no advance on any of the remaining three doomed planes.

After all the four hijacked plane had crashed, and another “renegade” was eventually identified as a MEDEVAC chopper in bound the Pentagon (and not another hijacked plane), all the scrambled planes established CAP orbits over NYC, Washington DC and on all major US towns. Many aviation enthusiasts were able to hear what happened in the air, because, quite surprisingly, radio communications were not encrypted but in the clear, on very well-known VHF and UHF frequencies.

The Washington area was filled with Combat Air Patrol orbits by USAF, ANG and also USAF, all managed by “Huntress” (the radio callsign of the NEADS weapons controller) and later by two AWACS: “Bandsaw” and “Chalice” operating off the MD/VA coast. In the early afternoon of Sept. 11, there were six CAPs over the nation’s capital with 12 fully armed planes checking any single radar contact. Those Squadrons that were not on alert duty, prepared their aircraft and launched them to cover as much territory as possible. Among them, the VMFA-321, based at Andrews AFB, whose F-18 Hornets with callsign “Angel” covered the higher part of the airspace from FL270 and above; the 1st FW F-15s scrambled from Langley as “First” and covering the FL230 – FL260 block levels; the DC ANG 113th Wing F-16s, using callsigns “Caps”, “Wild” and “Bully”, initially covering the airspace below FL230 then covering the lower portions of the airspace south of Washington DC from 5.000 ft to FL 140, and the ND ANG F-16s (callsign “Quit”) that were the first to be called into action being deployed to Langley to undertake QRA duties, set up patrols at about 25.000 feet in a racetrack designed to keep an eye to the east. Then, even the ND pilots were required to drop low to check one of the unidentified planes, which turned out to be MEDEVAC helicopters flying to/from the Pentagon.

There were many choppers operating in the Pentagon area. Among them, some UH-1 of the 1st Helicopter Sqn from Andrews AFB (“Mussel”) along with HMX-1 and US Navy helos shuttling VIPs to and from bases in MD/VA area.

Later on, even VA ANG F-16s using callsign “Fury” and NJ ANG F-16s with callsign “Snake”, were dispatched to the area.

Since the situation was quite dynamic, aircraft could be called to climb or descend to “investigate” suspicious contact or to escort aircraft landing at civil airports. Reagan National airport was used as reference point and referred to as Bullseye of the air defense operation on Sept. 11.

Obviously, the interceptors had to be supported by tanker aircraft: there were KC-135s launched from Pittsburgh (“Steel”), Bangor IAP (“Maine”) and Rickenbacker IAP (“Tazz” and “Flop”), and KC-10s launched from McGuire (“Teal”), providing air-to-air capacity to both hose and probe equipped aircraft (USMC F-18s).

This is the first of a series of articles about 9-11 attacks originally posted on the blog in the week preceding the 10th anniversary of Sept. 11 2001. Next article covers Air Force One journey on 9-11.

Let’s have a look at what happened in the airspace off Alaska a couple of weeks ago. On the night of May 3, 2017, two Russian nuclear-capable Tu-95MS Bear bombers, this time escorted by two […]