The recent Qantas B747-400 engine failure that compelled the QF74 on Aug. 31, 2010, to land only 41 minutes after departure from San Francisco (with destination Sydney), has already made the news. Unlike other minor failures occuring almost daily everywhere, an uncontained failure (that is quite different from an engine explosion….), is somehow rare, but not a big deal (if there’s no damage to the wing or fuselage caused by a separated engine part), especially if happening in the vicinity of the departure airport. Now have a look at the route followed by the aircraft from departure to landing taken from FlightAware.com: 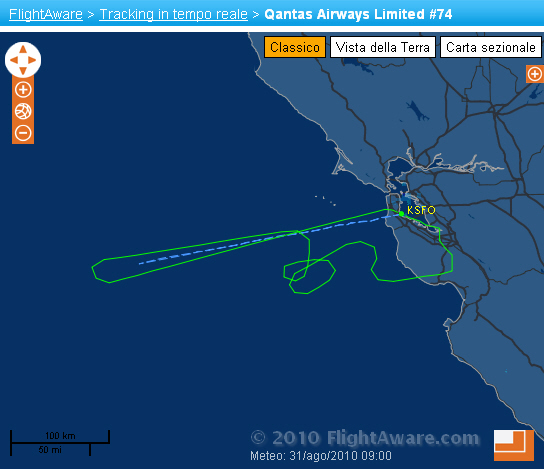 The route clearly shows that upon experiencing the n.4 engine failure, flying at FL300, some 270NM to the West of San Francisco, the QF74 headed back to SFO and, instead of proceeding directly to landing, it performed a couple of 360s to dump fuel. Someone asked why the pilot did not proceed straight towards the airport after loosing one engine (out of 4…) but I think that there’s nothing weird on such a behaviour: as the aircraft can fly safely also with a single engine (in particular circumstances…), it is safer to land the heavy plane (with 212 passengers) after loosing some thousands lbs of fuel. Indeed, much interestingly, the pilot did not (at least until the very last part of the flight) declare emergency (even if most news reports didn’t mention this detail or mistakenly stated that the flight had declared emergency) as the aircraft could be safely flown back on the remaining engines.

The analysis of the ATC recording is quite interesting: QF74 first call to the radar is to request descent to FL200. When requested if a vector back to San Francisco was needed, the pilot replies with a “stand by”, followed, minutes later by a request for radar vectors back to KSFO. Fuel dumping was performed from FL200, eastbound, then the aircraft was cleared to descend to 10.000 at pilot’s discrection (even if the aircraft maintaned FL200 and later “moved” on RAINS waypoint to continue its holding/fuel dumping).

Some videos taken with mobile phones from the passenger cabin of the aircraft can be found on the Internet.

The following article, published by the Sydney Morning Herald, on Sept. 2, 2010, provides some details dealing with airworthiness directives issued for the RR RB211 engines fitted to the QF B744 aircraft focusing on possible uncontained engine failures.

THE Qantas jet engine that exploded on Tuesday after take-off from San Francisco had not been inspected after safety warnings issued two weeks ago.

The safety bulletins in Australia, Europe and the US had warned of ”uncontained” engine failure – the technical term for when components are sprayed out of the engine enclosure during a malfunction.

The airworthiness directives were issued for Rolls-Royce RB211 engines, the model fitted to the Qantas 747-400 that was forced to make an emergency landing at San Francisco.
A Qantsa jet was forced to turn back to San Francisco after a hole was blown in the shell of the engine.

Qantas confirmed the jumbo’s engines had not been inspected because it was not due for its regular maintenance checks. The engine that failed was last inspected on July 8. Some of the 212 passengers on QF74 reported seeing flames and sparks fly out of the plane’s fourth engine about 20 minutes after take-off.

The explosion ripped a hole through the engine’s cowling, causing the aircraft to shudder and requiring the pilots to dump fuel before making the emergency landing.

One passenger recalled seeing flames ”like a giant Roman candle stick” shooting towards the back of the aircraft from the failed fourth engine.

Kirk Willcox, from Randwick, was seated in a row near the wing when he ”suddenly heard a loud pop and a swish” as the fourth engine caught fire.

”We knew we had not hit turbulence,” he said.

”We made a bit of a skid to the left, got the wobbles and then dropped in altitude.

”The girl I was sitting next to said, ‘the engine is on fire’, and I looked out and saw what looked like a giant Roman candlestick.

”It varied in intensity and was quite extraordinary.”

The airworthiness directive warned that ”several low pressure turbine shafts had been found with cracks originating from the rear cooling air holes”.

Qantas said that it was ”fully compliant” with the airworthiness directive, which required that the engine be inspected the next time it was due for maintenance.

A replacement engine has been flown to San Francisco.

The following video shows what may have caused the crash of a National Air Cargo Boeing 747-400 shortly after take off from Bagram Airfield, in Afghanistan, on Apr. 29. As we reported on our first […]

The Spanish newspaper El Paìs has just published on his website a video of the Spanair 5022 crash, recorded by the airport’ surveillance camera. Unfortunately the video is not clear as it shows the aircraft […]

Radio Comms, Tracks And All The Details About The Interception Of The ‘Ghost Jet’ Last Week

The “Ghost Private Plane” flew across Europe escorted by fighter jets who unsuccessfully tried to establish a radio contact, before tragically crashing in the Baltic Sea. A clip provides all the radio comms and tracks […]