As I wrote on a previous post, on June 1st 2007 I flew from Brisbane to Los Angeles on board QF175. After about 5 hours flying over the Pacific Ocean the B-747-400 I was flying on overflew a big island that came almost unexpected to me. I was seated on the left side of the aircraft and the island passing below at 596MPH appeared quite big even from 33.000 feet. 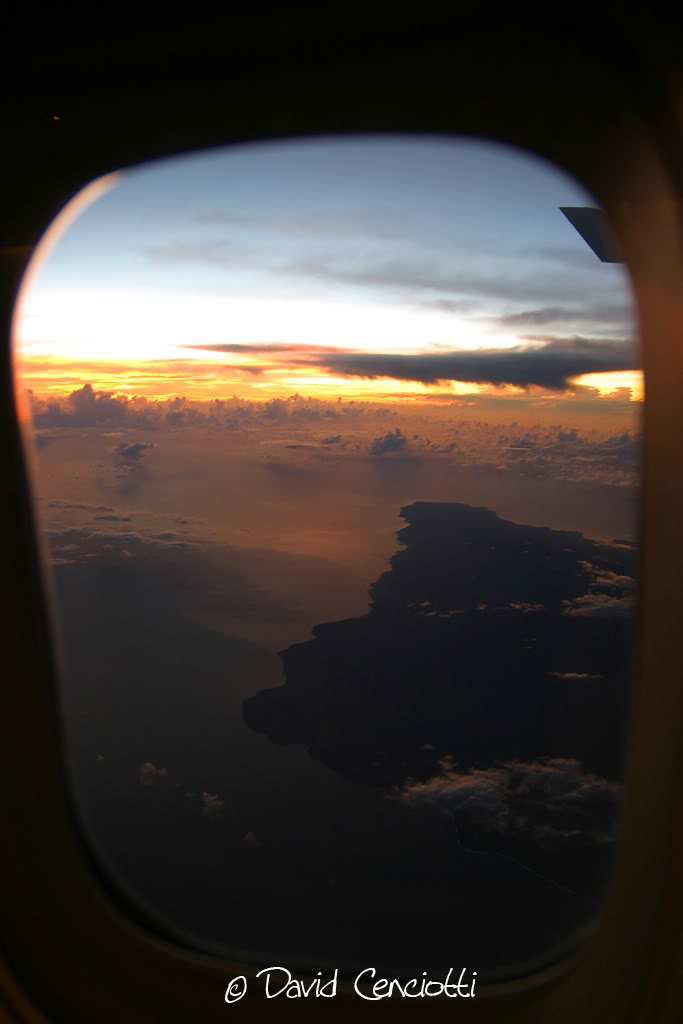 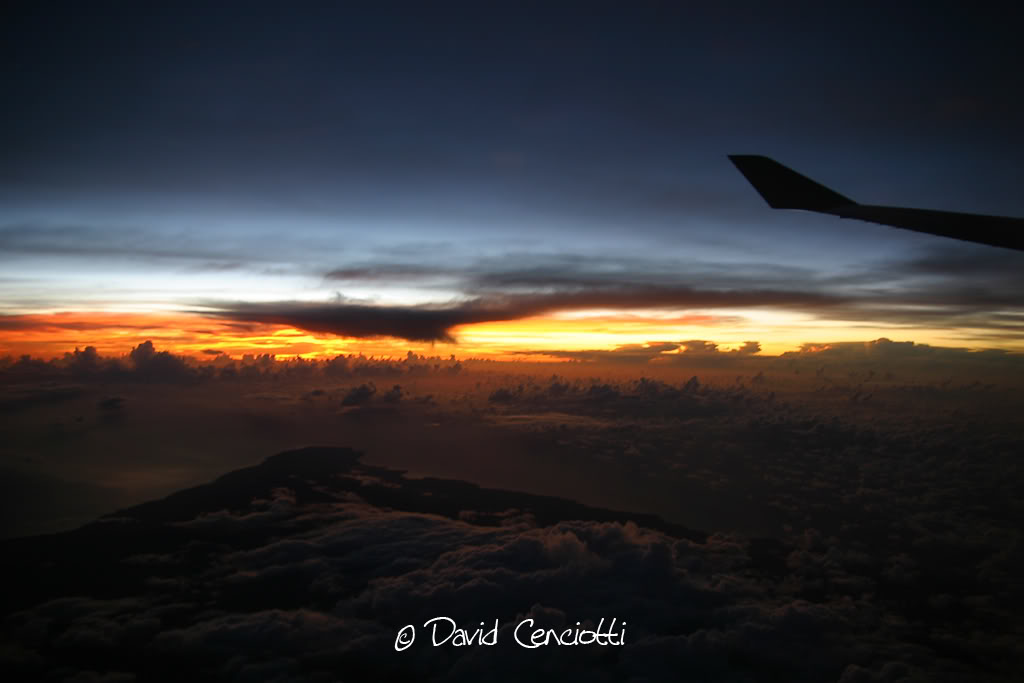 The view of an apparently unpopulated island in the midst of the Pacific and the moderate turbolence that the B-747 was sustaining let me think to the island of Lost, one of the most famous American serial television series (and my very favourite one). Lost follows the fate of the survivors of the Oceanic Airlines 815 on a mysterious tropical island located somewhere in the Pacific. Even if the serial is filmed mainly in the Hawaii, QF175 flight brought me on a track similar to the one flown by the fictionary Oceanic Airlines 815 on the date of crash Sept. 22th 2004 (see also http://oceanic-air.com/ and http://en.wikipedia.org/wiki/Oceanic_Airlines). Departed from Sydney at 14:55, from gate 23, and flying to Los Angeles, where it was expected to arrive at 10:42L, the B-777 of Oceanic 815 experienced a radio failure 6 hours after take-off. The pilot decided to land to  Nadi airport in the Fiji island (even if the nearest landing field was the Faleolo International Airport in Samoa), but 2 hours later, the plane, flying off-course by approximately 1000 miles, encountered severe CAT (Clear Air Turbolence) and broke-up.
The following compilation from Youtube user battletops provides a view of the plane crash from the passengers’ perspective.

According to the interesting study published on Lostpedia (http://www.lostpedia.com/wiki/Flight_path_of_Oceanic_815) basing on the characters’ statements (failure after 6 hours, turnaround, 2 hours before mid-air break up), the crash location should be somewhere North of Fiji. Actually, Lostpedia based its calculation on a straight route connecting SYD (Kingsford Smith International) to LAX (Los Angeles International) while actual route is most probably sensibly different and perhaps is almost identical to the one followed by my flight from BNE (Brisbane International) to LAX.
I used FlightAware (http://flightaware.com/) to find out the flight plan of the QF 175. Since the FPL filled on June 1st (date of my flight) was not available, I had to try other dates’ planned routes. I plotted them using FSNavigator and finally I was able to identify a route that was quite similar, if not the same, of that flown on June 1st.
These are the details of QF175 on June 9th, from FlightAware: 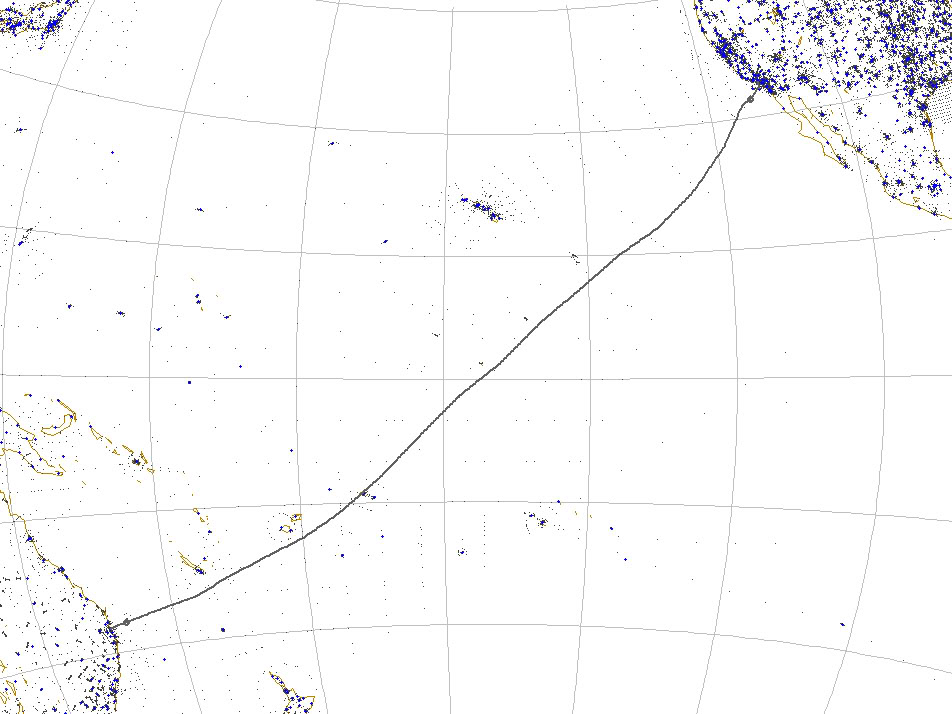 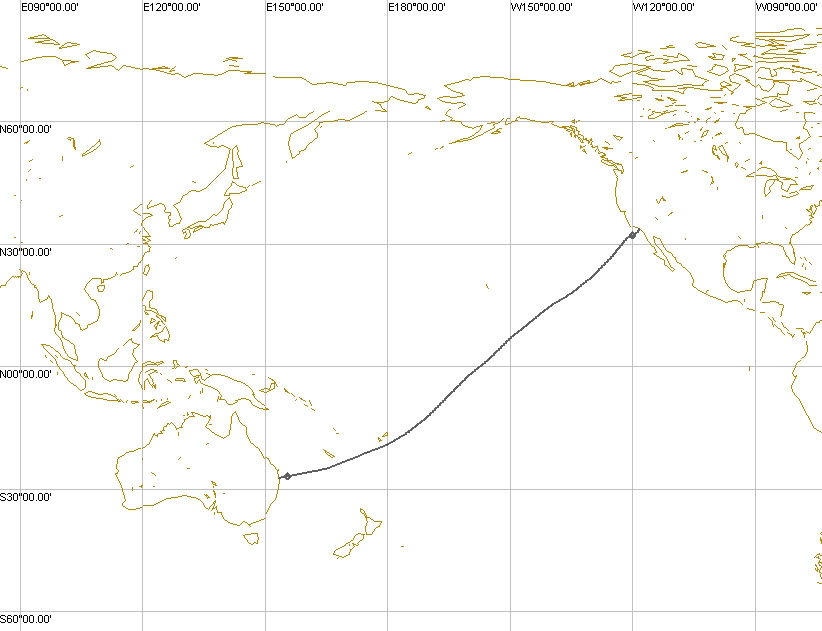 Flight QF175 flew above two islands to the North East of Nadi, East of the International Date Line. The one I could see from my seat was Western Samoa. 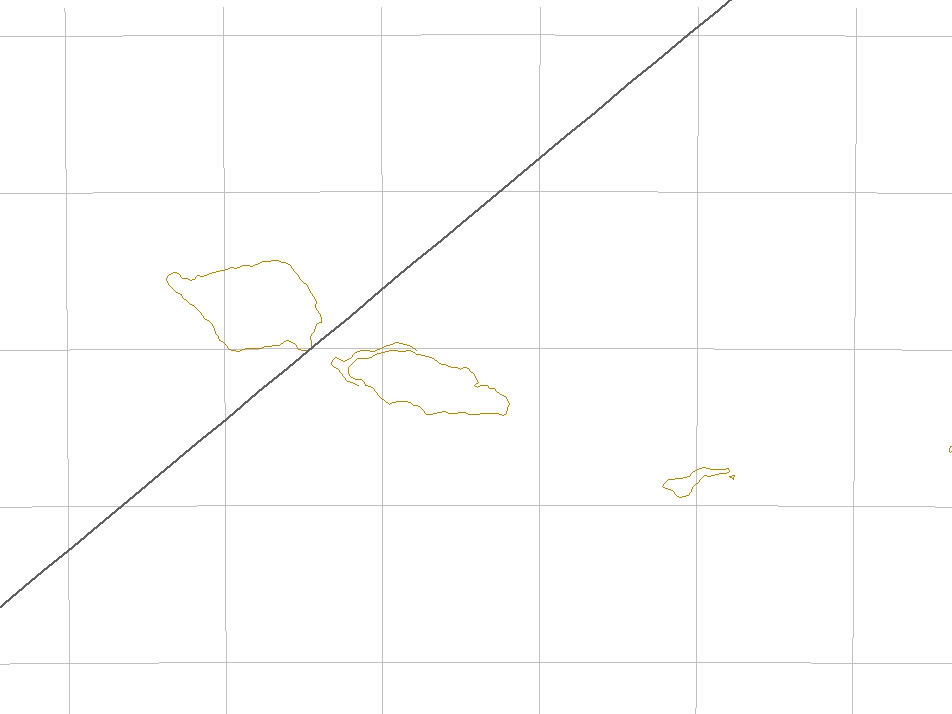 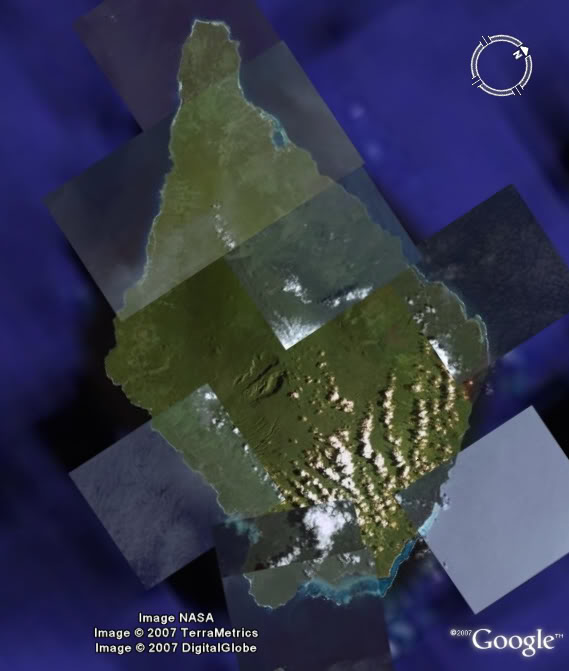 In order to understand if QF175 and OC815 had flown the same route I chose the FPL of a real flight connecting SYD to LAX: QFA 11. I picked the most recent flight plan from FlightAware, dated Sept 27th:

I plotted the QF11 and as you can see from the map below, the Qantas flight from Sydney to Los Angeles (that could have flown the same route as Oceanic 815) followed a route much similar to that of QF175. 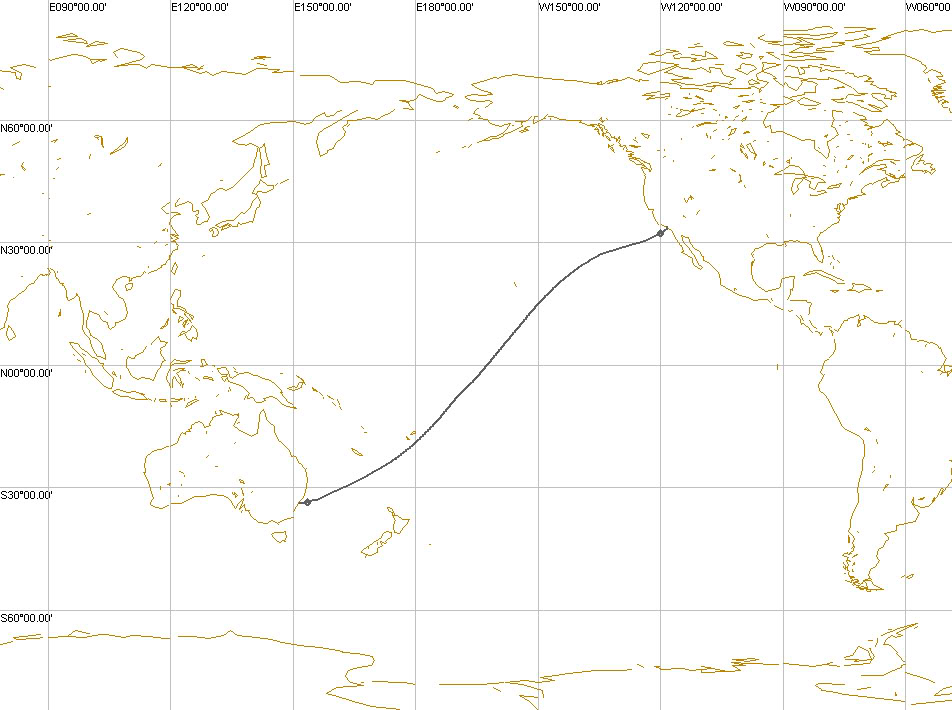 The above map (drawn, as the others using the FS addon FSNavigator) also represents one of the possible flight paths for Oceanic 815.
I used a cruising speed of 340KIAS (that I chose to have a total flight time to destination of 12 hours and 14 minutes, the same of QF 11 that on Sep. 28th landed in LAX after 12 hours and 8 minutes), a turnaround point 6 hours after departure, a standard 180° turn, and 2 hours of flight NORDO (No Radio) direct to Nadi International airport and obtained a new crash location 350 Kilometers to the W of Samoa and 600 Kilometers to the North of Fiji; a point that is incredibly coicident with a very small island in the Pacific Ocean whose name is Wallis Island (Uvea). According to my study, that is the exact location of Lost island. 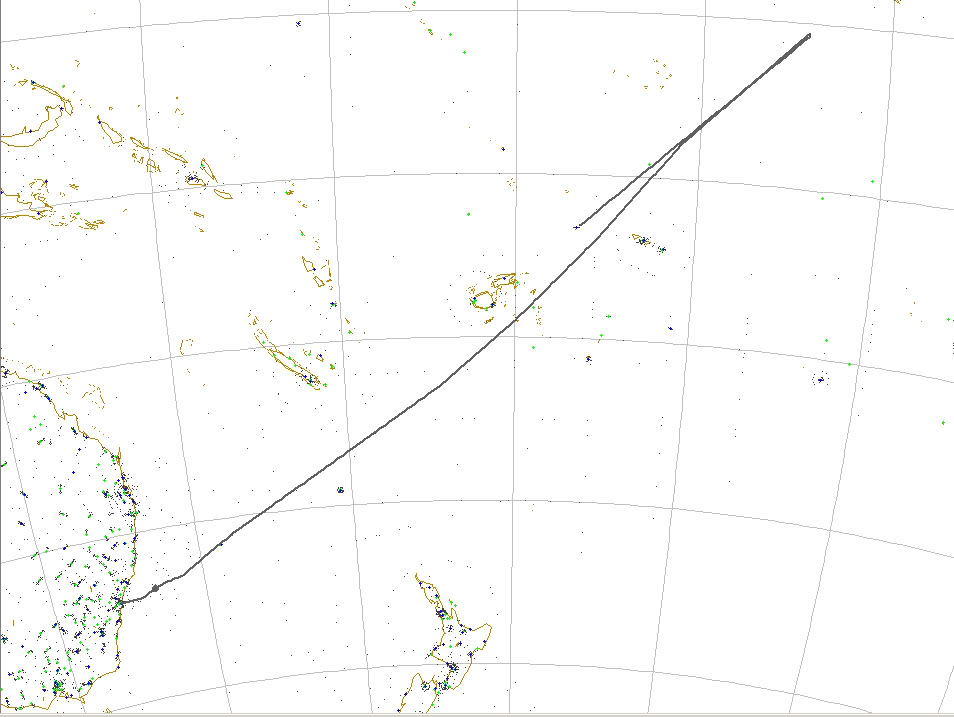 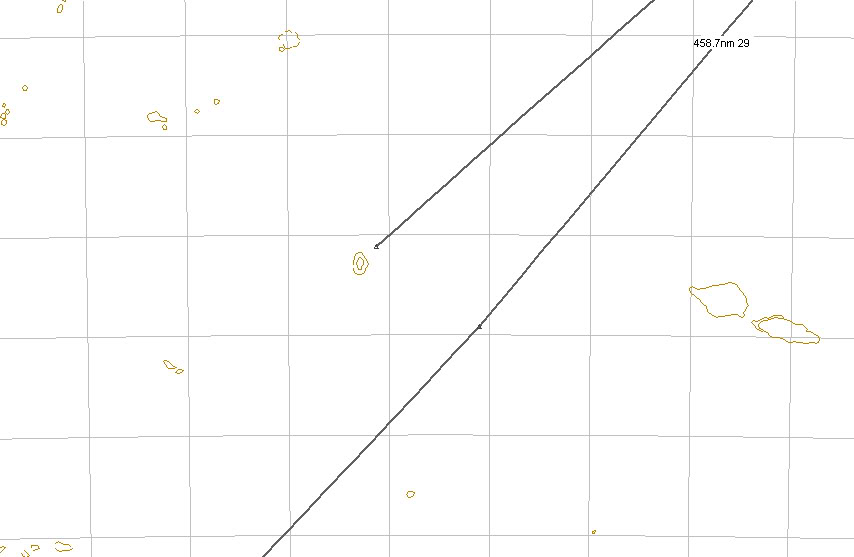 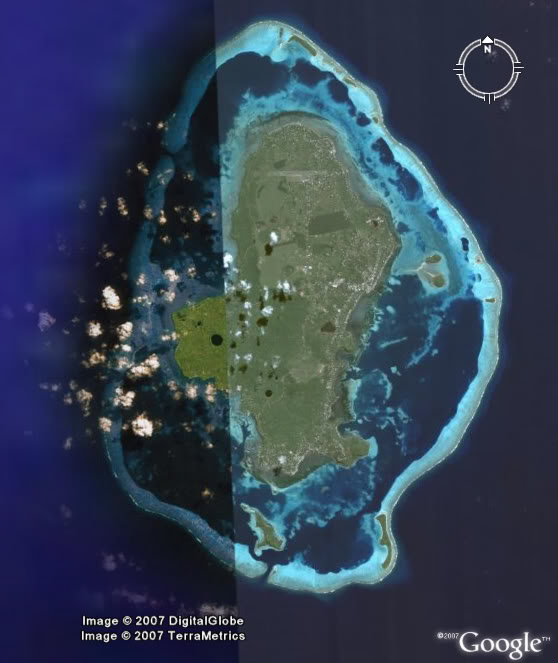 More information are being disclosed about the QF30 as more passengers provide their first hand account of the flight. According to what they recollected, the aircraft did not “plunge” from 29.000 to 10.000 feet. The […]