The following article was published on the May 2002 issue of Air Forces Monthly. 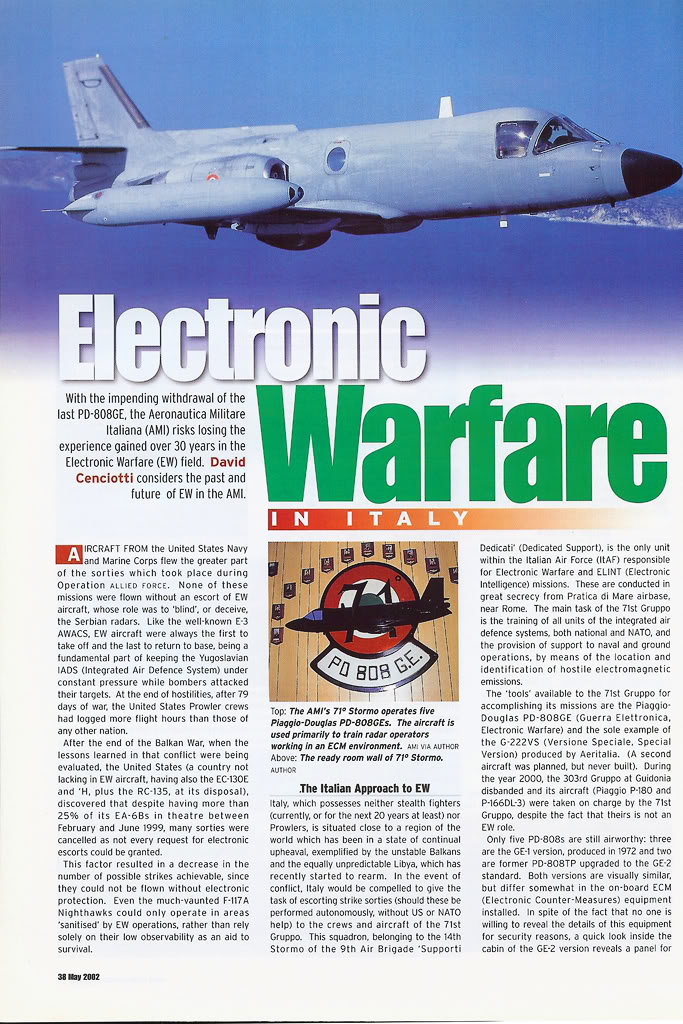 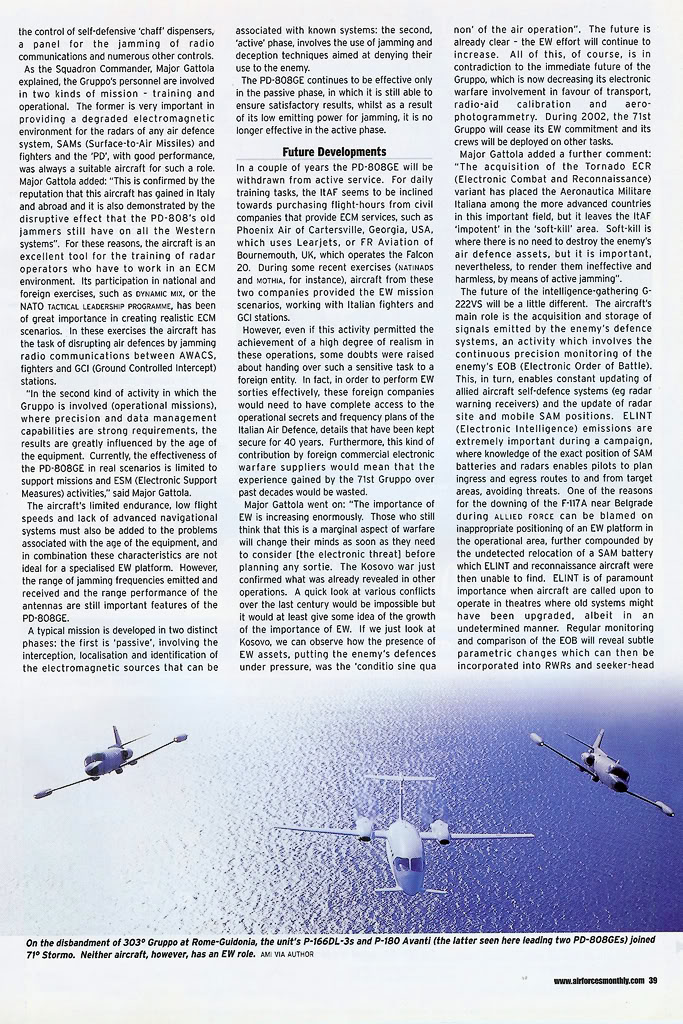 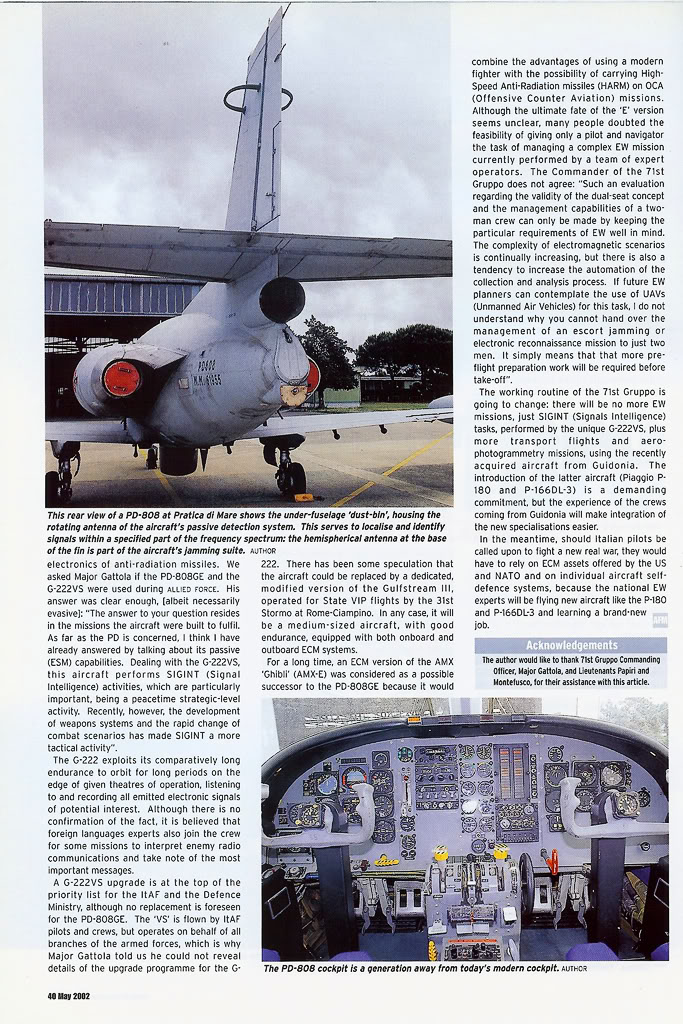 With the pending withdrawal of the last PD-808GE, the Aeronautica Militare Italiana, seriously risks to loose an experience of 30 years in the Electronic Warfare (EW) field, despite the recent Kosovo war showed how in a modern conflict, the survival of aircraft and crews is largely dependent on the presence of electronic warfare dedicated assets in the Theatre Of Operations. David Cenciotti explains past and future of the EW in the Aeronautica Militare Italiana.

The United States Navy and Marine Corps, were the aircraft that flew the most during Operation Allied Force; there was no mission without an escort performed by EW aircraft that could blind or deceive the Serbian radars. Just like more famous aircraft as the E-3 AWACS, the EW assets were the first to take off and the last to return to base, because they were fundamental to keep the Yugoslavian IADS (Integrated Air Defence System) under constant pressure while bombers attacked their targets, so that at the end of the hostilities, after 79 days of war, the Prowler crews had logged more flight hours than the pilots of any other aircraft.
After the end of the Balkans War when the “decision makers” decided to put on the paper the so-called “lessons learned”, the United States, that for sure don’t lack EW aircraft (having also EC-130E and H, and RC-135 in the orbat), discovered that despite having more than 25% of EA-6Bs in the theatre of operations between February and June 1999, a lot of sorties were cancelled because not all the requests for electronic escorts could be granted hence a decrease of the number of possible strikes. Even the stealths operated in areas sanitised by EW operations.

Italian approach to the EW

Italy, that has neither the stealths (for the moment and for the next 20 years at least) nor the Prowlers, is in the midst of the Mediterranean Sea, a part of the World that is continuously an area of threats (just think to the never ending Balkan wars or to the unstable Libya that has been recently rearming). In case of conflict, it would be compelled to give the task of escorting the strike sorties (should these be performed autonomously without US or NATO help) to the crews and equipment of the 71st Gruppo. This squadron, belonging to the 14th Stormo of the 9th Air Brigade “Supporti Dedicati” (Dedicated Support), is the only unit within the ItAF to be responsible for the Electronic Warfare and ELINT (Electronic Intelligence) missions, that are conducted within deep secrecy from the Pratica di Mare airbase, next to Rome. Main task of the 71st Gruppo is training all the units of the integrated air defence, both national or NATO, and the support to the naval and ground activities, by way of the discovery and identification of hostile electromagnetic emissions.
The “tools” in the hands of the 71st Gruppo for accomplishing its missions are the PD-808GE (Guerra Elettronica, Electronic Warfare) and the only example of G-222VS (Versione Speciale, Special Version) ever produced by the Aeritalia. During the year 2000, the 303rd Gruppo at Guidonia disbanded and its aircraft (P-180 and P-166DL-3) were taken on charge by the 71st Gruppo, despite their role is not the EW.
There are only 5 PD-808 still airworthy, 3 are GE-1 version, produced in 1972; 2 are former PD-808TP upgraded to the GE-2 standard. Both versions are aesthetically similar (but the tail antenna); what is really different is the on-board ECM (Electronic Counter-Measures) equipment. Despite nobody is willing to unveil the details of such equipment because of secrecy matters, a quick look in the fuselages of the two versions permits to see, inside the GE-2, a panel for the control of self-defences “chaff”, a panel for the jamming of radio communications and few other peculiarities.
As the Squadron Commander, Maj. Gattola explains, personnel of the Gruppo, is involved with two kind of duty: training activity and operative missions. The former is very important to provide degraded electromagnetic environment for the radars of the Air Defence, SAMs (Surface to Air Missiles), fighters: the “PD” was always a good aircraft with good performances for such a role. “This is shown by the consent that this aircraft has gained in Italy and abroad, and is demonstrated also by the effects that the old emitters of the P-808 still have on all the Western systems”. For these reasons the aircraft is a good mean for the training of Radar Operators that have to work in jammed environment: in this respect the participation to national and foreign exercises, like the Dynamic Mix or Tactical Leadership Programme, must be judged. In these exercises the aircraft has the task to “disturb” the air defences by jamming radio communications between AWACS, fighters and GCIs (Ground Controlled Interceptions).
“In the second kind of activity the Gruppo is involved (the operative missions) where precision and data management capabilities are strongly required, the results are deeply influenced by the antiquity of the equipment”.
“Currently, effectiveness of the PD-808GE in real scenarios is limited to the support missions and ESM (Electronic Support Measures) activities” told us Gattola.
To various problems, that must be addressed to the age of the equipment, other deficiencies (mainly due to the flight characteristics of the platform) must be added: scarce endurance, low speed and lack of advanced navigational systems have effects particularly bad for an EW aircraft. However, the range of frequencies emitted and received and the range of the antennas are still important peculiarities of the PD-808.
A typical mission is developed in two phases: the first, “passive”, of interception, localisation and identification of the electromagnetic sources that can be associated to known systems; the second, an “active” phase, foresees the use of jamming and deceits aimed to deny their use by the enemy.
The PD-808 is still a good asset only in the “passive” phase, in which it is still able to ensure satisfactory results, while because of the low emitting power it is no longer effective in the “active” one.

The author would like to thank 71st Gruppo Cdr Maj Gattola, and Lt. Papiri and Montefusco, for the assistance with this article.