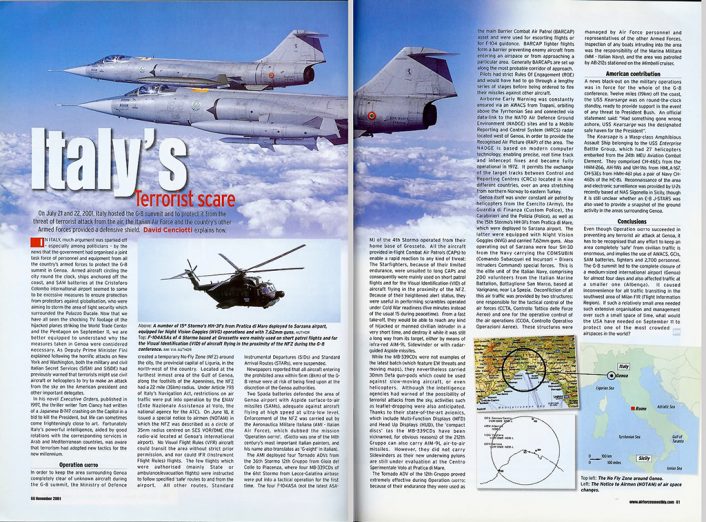 In Italy, especially at political level, a lot of polemics were caused by the news that the Government had organized a joint task force, composed by personnel and equipment belonging to all the Armed Forces to protect the G-8 summit held in Genoa on 21st and 22nd July 2001.
Aircraft flying 24 hours a day carrying real armament, ships just off the coast and SAM batteries located at the “Cristoforo Colombo” international airport looked like overdone measures to ensure safety against attacks of the so-called “black blocks” or “Seattle people” whose aim was to overtake the sanitized area surrounding the Palazzo Ducale, the ancient building hosting all meetings, and protest against globalisation. Now, just after we saw the videos of the B-767 striking the World Trade Center and the Pentagon we can understand why those measures were considered paramount.
As Deputy Prime Minister Fini, explained in the aftermath of the New York and Washington DC attacks, both Military and Civil Italian Secret Services (SISMI and SISDE) had warned the authorities that terrorists could try to attack the President of the United States and the exponents of the other countries, from the sky, using civil aircraft or helicopters.
So, not only Tom Clancy had foreseen in a certain way the use of a hi-jacked aircraft as a mean of destruction against an important target (in “Executive Orders” published in 1997 he writes of a Japanese B-747 crashing on the Washington’s Capitol to kill the POTUS), but even the powerful Italian intelligence, helped also by its good relationships with the Services of the Arabs and Mediterranean countries, was conscious that new Millennium terrorism had developed new (once unpredictable) tactics.

In order to keep the area surrounding Genoa completely clear from any unknown aircraft, Ministry of Defence, charged by the Government to organize and manage all the security forces for the G-8 summit, created a temporary No-Fly Zone around the town, provincial capital of the Liguria region in NW Italy, located at the farthest inmost part of the Gulf of Genoa, along the foothills of the Apennines, with a coastal extension of about 35 km. Under provision of the article 793 of the Navigation Act, the restrictions to the air traffic were officially implemented by the ENAV (Ente Nazionale Assistenza al Volo), the national agency for the ATC, that on June 18th issued a special notice to airmen (NOTAM) in which the NFZ was described as the circle of 35 NM radius centred on SES VOR/DME (the radio-aid located at the international Genoa airport). No VFR could transit the area nor could the IFR flights without a hard-to-be-obtained prior permission; the few authorized flights (mainly State or ambulance/evacuation flights) had to follow particular “safe” routes to and from the airport, while all other routes, SIDs (Standard Instrumental Departures) and STARs (Standard Arrival Routes) comprised, were suspended.
Newspaper reported that all aircraft entering a prohibited area within 5 NM of the meeting place of the G-8 could be fired upon at Genoa questor’s discretion.
Two Spada batteries provided defence of the airport environment with their “Aspide” surface to air missiles, adequate against aircraft flying high speed at ultra-low level. Enforcement of the NFZ was in the hands of the Aeronautica Militare Italiana that dubbed intervention “Operation Giotto” (Giotto is one of most famous painters of the 14th Century but also the Italian translation of “G-eight”.
The ItAF deployed 4 Tornado ADV, belonging to the 36th Stormo 12th Gruppo, from Gioia del Colle to Piacenza where 4 MB-339CD of the 61st Stormo, coming from Lecce-Galatina airbase at their first in real operations, were based too. Operating from their home base Grosseto were the 4 F-104 ASA (not the very latest ASA-M) of the 4th Stormo.
All the aircraft provided in-flight Combat Air Patrols in order to react to all kinds of threat very quickly:

– The “Starfighters” because of their scarce endurance, were unsuitable to long CAPs so were mainly used for short patrolling flights and VID (Visual Identification) of aircraft flying in the proximity of the NFZ. They were useful though, for the heightened alert status, to perform scrambles operating under Cold War readiness (5 minutes instead of the 15 mikes during peacetime). After a quick take-off they could reach, in a very short time, every kind of hi-jacked or manned civilian intruder and destroy it at still a great distance from the target with either their infrared AIM-9L “Sidewinder” or radar guided “Aspide” missiles.
– The MB-339CDs weren’t the latest batch’s examples (with EW threats and moving maps) but nonetheless carried the 30 mm “Defa” gun-pods that could be used against slow moving aircraft or even helicopters: even though the intelligence agencies had warned about terrorist attacks from the sky also demonstrative acts like leaflets dropping was expected. The “Compact Disks” (as the 339s are dubbed) of the 212th Gruppo, thanks to their “state of the art” avionics with MFD (Multi-Function Displays) and HUD (Head Up Display) can also carry AIM-9L air to air missiles but they didn’t carry the Sidewinders because their new underwing pylons are still under evaluation at the Centro Sperimentale Volo at Pratica di Mare.
– The Tornado ADV of the 12th Gruppo proved very effective during the “Operation Giotto”: thanks to their endurance, they were used as the main BARCAP asset and could be used for escorting flights or for F-104 guidance.

Pilots had strict ROE (Rules Of Engagement) so they would have had to follow lengthy series of stages before being ordered to fire their missiles against other aircraft.
Airborne Early Warning was constantly ensured by an AWACS from Trapani FOB, orbiting above the Tyrrhenian Sea and connected via data-link to the NADGE sites and to a mobile MRCS radar located West of Genoa in order to provide the Recognised Air Picture (RAP) of the area.
The town was constantly patrolled by various helicopters belonging to the Esercito (Army), Guardia di Finanza (Custom Police), Carabinieri and Polizia (Police) not to mention the 15th Stormo’s HH-3F from Pratica di Mare, deployed to Sarzana airport, NVG equipped and carrying 7,62 mm guns. Also operating out of Sarzana were the 4 SH-3D of the Navy carrying the COMSUBIN special forces.
Deconfliction of all the air traffic was provided by two structures: one responsible for the tactical control of the air forces (CCTA, Controllo Tattico delle Forze Aeree) and one for the operative control of the air operations (CCOA, Controllo Operativo Operazioni Aeree). Air Force personnel managed these structures with representative members of the other Armed Forces.
Inspection of the boats was responsibility of the Marina Militare, that ships aside, used also AB-212s stationing on the Mimbelli cruiser.

For understandable reasons American contribution news were restricted.
Just 12 miles off the coast USS KEARSARGE LHD-3 was on station standing by 24 hours a day to provide support had there been a need to assist the President Bush. As officially declared “had something gone wrong ashore, USS KEARSARGE was the designated safe haven for the President”.
The Wasp-class Amphibious Assault Ship, belonging to the USS Enterprise Battle Group, with 27 helicopters (all belonging to the 24th MEU Aviation combat Element comprising CH-46E from the HMM-266, AH-1W and UH-1N from HMLA-167, CH-53E from HMH-461 plus a pair of Navy CH-46D of the HC-8) on board. Reconnaissance of the area and electronic surveillance was provided by U-2s recently based to NAS Sigonella in Sicily but it is still unclear if also an E-8 Joint Stars was used to provide a snapshot of the ground activities in the areas surrounding Genoa.

Even though the whole operation succeeded preventing any attack to take place, it must be recognised that the effort to keep an area completely “safe” from civilian traffic is enormous and implies the use of AWACS, GCIs, SAM batteries, fighters and 2.700 men. The G-8 summit led to the closure of both an international airport of medium size (Genoa) and affected the traffic of a nearby smaller one (Albenga) for almost 4 days. It caused troubles for the traffic transiting in the Southwest area of Milan FIR. If a relatively small area, for a small period, needed such an organization and management what did the US need, on 11th September, to protect one of the most overcrowded airspace of the World?