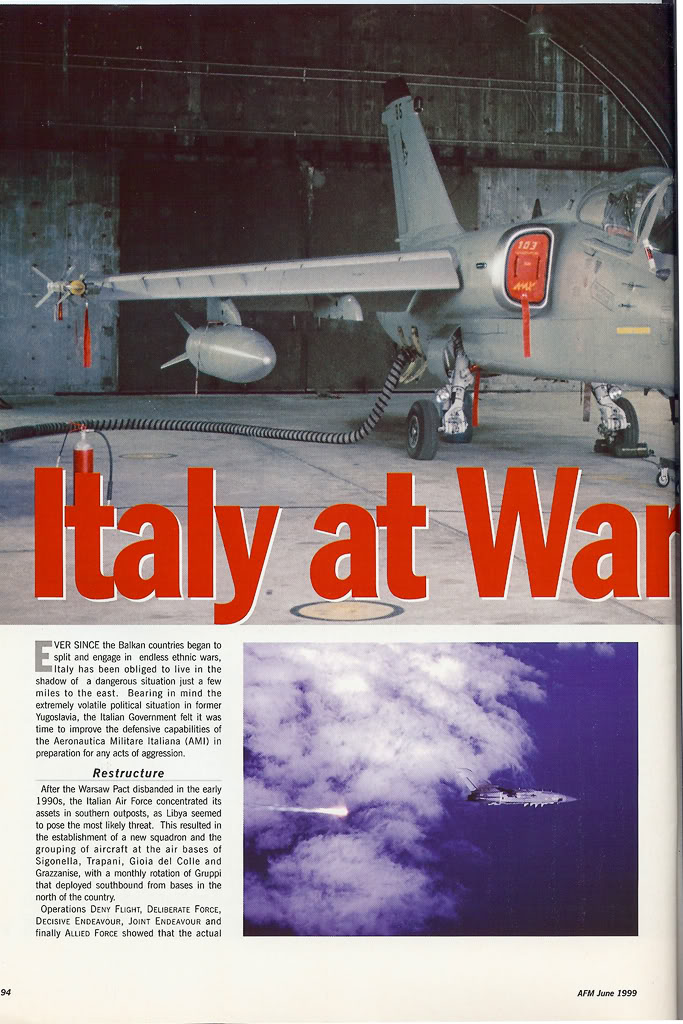 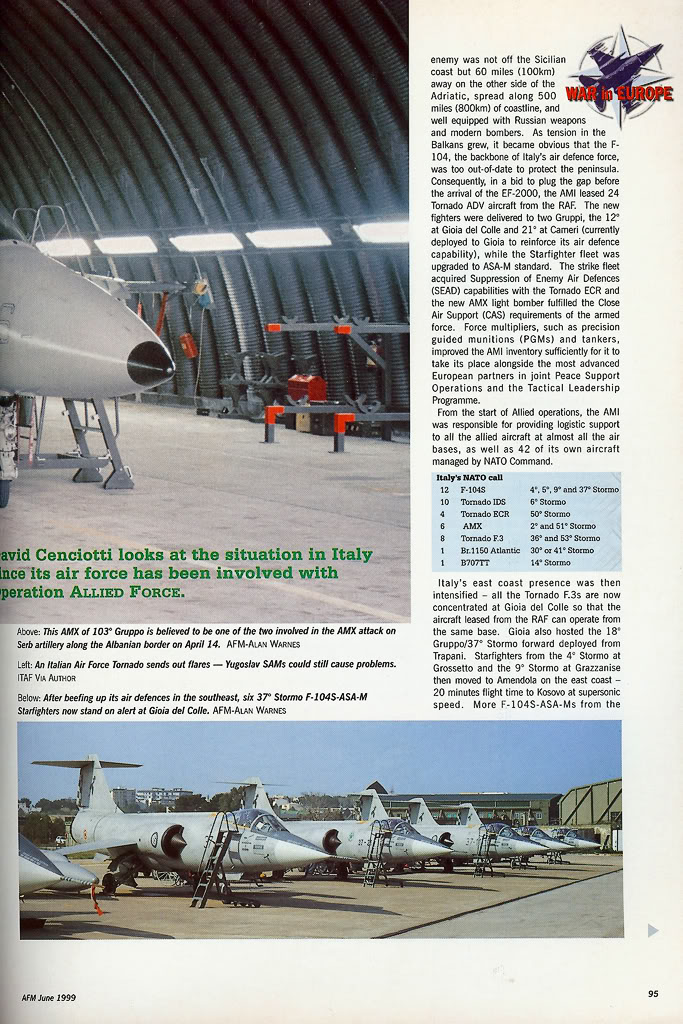 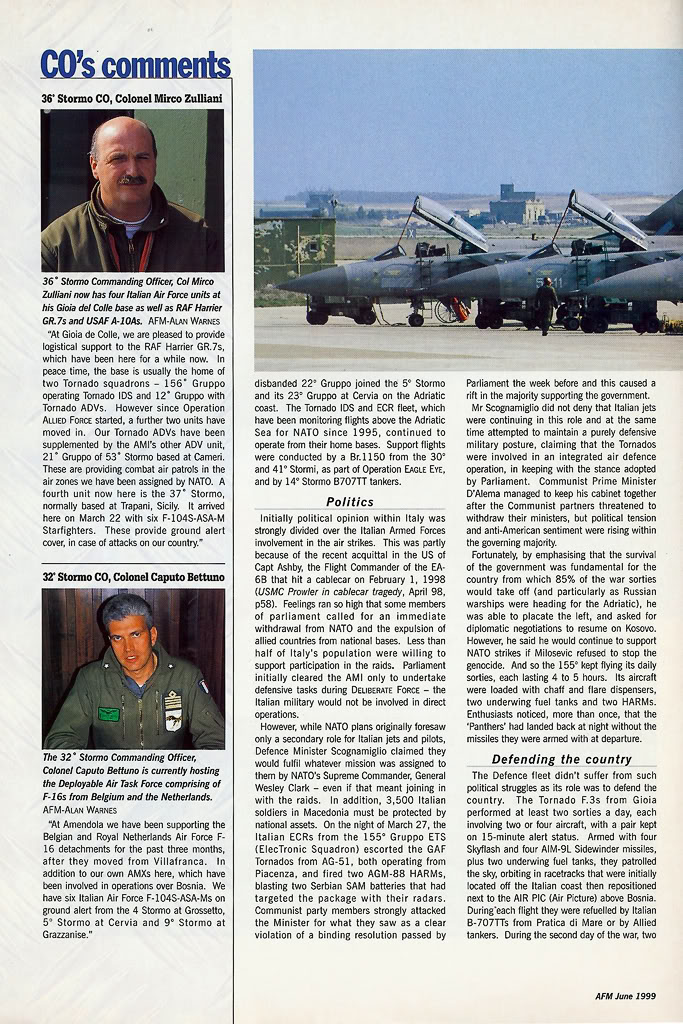 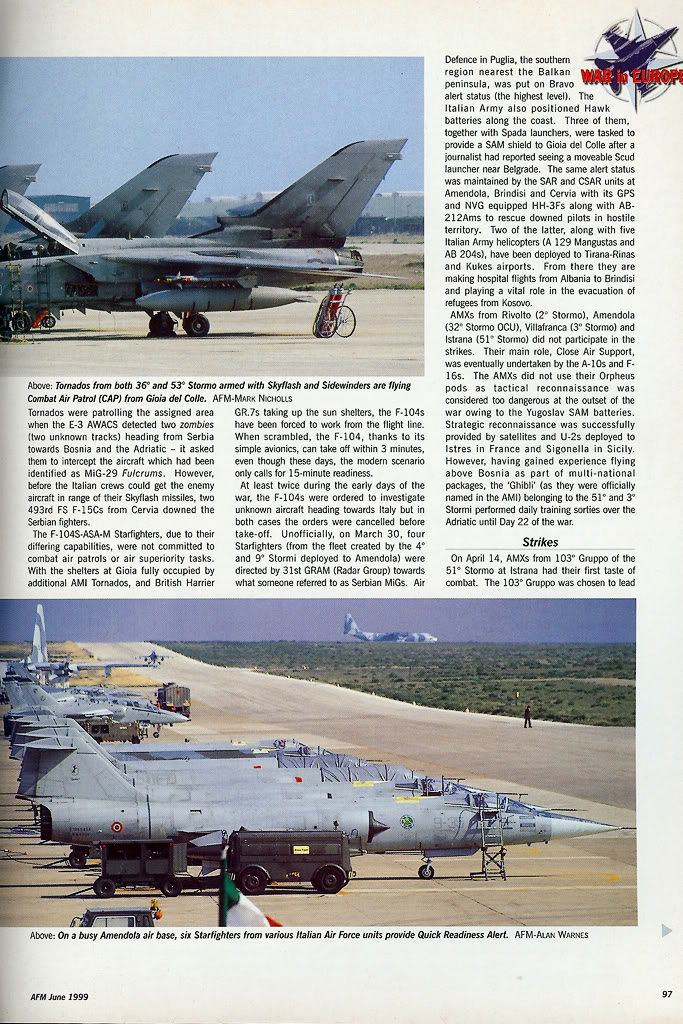 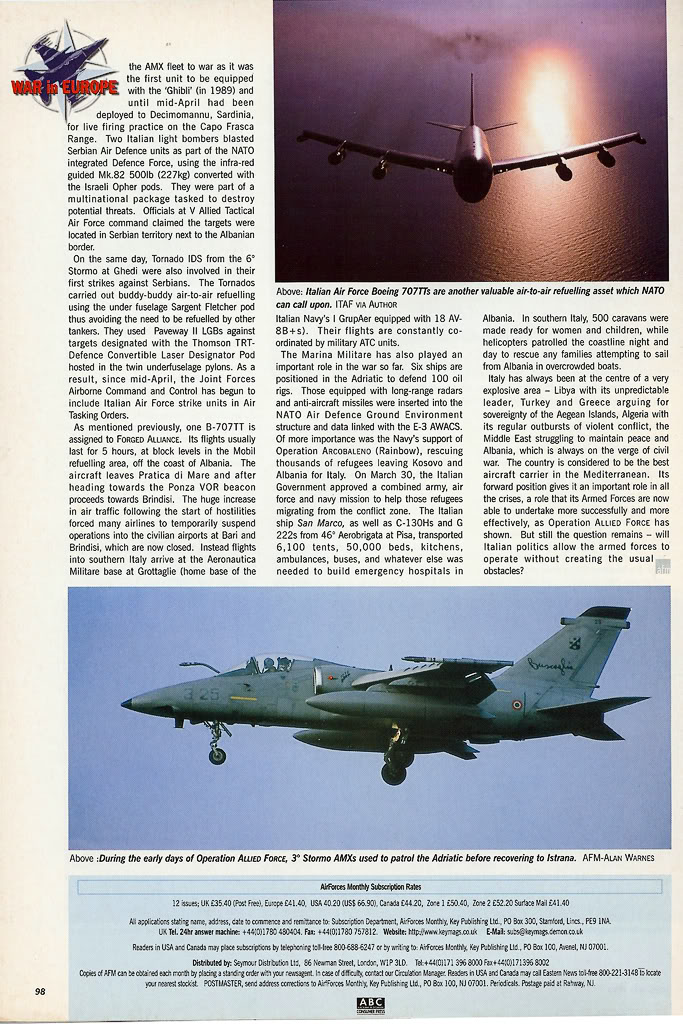 Since the Balkan countries have begun to split and fight in a never ending ethnic wars, Italy has been seriously involved in trying to cohabit with a danger lying few miles East of her. With the extremely unstable political situation of former Yugoslavia always in mind, Italian Government began thinking about an improvement of the capabilities of the Aeronautica Militare Italiana (AMI) in order to give her the tools to react with effectiveness in case of aggression.
Till the first years of the ‘90s Italian Air Force has had a “Southern profile” . The Warsaw Pact disbandment made her concentrating the forces in its southern outposts as the only threats were thought to be arriving from Libya. The result was the birth of a new squadron and the grouping of aircraft in the airbases of Sigonella, Trapani, Gioia del Colle and Grazzanise with also a monthly rotation of Gruppi that deployed southbound from the bases on the North of the country . The Deny Flight, Deliberate Force, Decisive Endeavour, Joint Endeavour and finally Deliberate Force showed that the actual “enemy” was not off Sicily but on the other side of the Adriatic, spread along 800 Km of coasts, 100 Km of sea away, well defended with Russian weaponry, with modern bombers and equipment. This was obviously the worst neighbor to deal with and, as happened in the first years of the ‘80s, the Italian structure played another migration in order to protect the country from the new potential threat. As tension in the Balkans grew, public opinion realized that the F-104, the backbone of all the Air Defence, was too obsolete to protect the peninsula and as a consequence the AMI leased from the RAF 24 Tornado ADV, “gap filler” between F-104 and EF-2000. The new fighters were delivered to two Gruppi, the 12th at Gioia del Colle and 21st at Cameri (now joining the 36th Stormo at Gioia) while the Starfighter fleet was upgraded to the ASA-M version. The strike fleet acquired SEAD (Suppression of Enemy Air Defences) capabilities with the Tornado ECR and the new AMX light bomber fulfilled the CAS (Close Air Support) requirements of the armed force. Forces multipliers like Precision Guided Munitions (PGM) and tankers improved the AMI inventory and let her participate with advanced equipment joint Peace Support Operations and enter the Tactical Leadership Programme together with the most advanced European partners.

At the beginning of the Allied Force operations the ItAF had the responsibility of the logistic support of all the allied aircraft in almost all the airbases and 42 aircraft of its inventory managed by NATO Command. Unofficially they were:

With war in the neighborhood East coast presence was strengthened. All the Tornado F3s were concentrated at Gioia del Colle so all the aircraft leased from the British operated from the same base. Gioia hosted also the 18th Gruppo deployed in forward position from Trapani.
Starfighters from 4th Stormo at Grosseto and 9th Stormo at Grazzanise also moved to Amendola on the Eastern coast, 20 minutes flightime to Kosovo, a pair at supersonic speed. More F-104ASA-M coming from disbanded 22nd Gruppo joined the 5th Stormo and its 23rd Gruppo at Cervia always on the Adriatic coast. The Tornado IDS and ECR fleet, involved since 1995 in the monitoring flights above Adriatic sea under NATO flag for Sharp Guard, Determined Force, Decisive Endeavour, Joint Endeavour and Deliberate Force, thanks to their endurance and to their air to air refueling capabilities kept operating from their homebases. Supporting flight were conducted by Br.1150 from 30th and 41st Stormo, within the Operation Eagle Eye, and by 14th Stormo B707TT tankers.

As said, one B-707TT of the four that equip the 14th Stormo, was assigned to the Deliberate Force. It flew a single night missions per day refueling Italian and foreign assets with its starboard and port hoses. Its flight plan made the “Penny” (radio callsign of the tanker) orbiting for at least 5 hours at block levels in the refueling area called “Mobil” off the Albanian coasts. The aircraft always took off from Pratica di Mare and after heading towards the Ponza VOR proceeded towards Brindisi and then “feet wet” to the operative racetrack. The Allied Force was the first war to be fought by the Italian Tanker Force.

The big increase in the air traffic flow following the beginning of the hostilities caused many airways to be temporary suspended and the civilian airports of Bari and Brindisi to be closed. In order to provide a call for people going towards Southern Italy, the Aeronautica Militare opened the military airport of Grottaglie, that is also homebase of the I GrupAer of the Italian Navy with 18 AV-8B+, to the Alitalia, Air One and British Airways companies. Their flights had to be constantly coordinated with military ATC units and also after the Bari airport was opened again flights were allowed with only two hours separation one another.
The Marina Militare played an important role in the war. Six ships were positioned in the Adriatic in order to defend the above 100 oil rigs in the sea. Those equipped with long range radars and anti-aircraft missiles were inserted in the NADGE structure and data linked with the E-3 AWACS. More important was her support to the Operazione Arcobaleno (Rainbow), for the rescue and the hosting of the hundred thousands of refugees that escaped from Kosovo and Albania towards Italy. With a great experience in facing such crisis, Italian Government approved on March 30th a joint Army, Air Force Navy mission to help the Kosovo population migrating from the fighting area. The Italian ship San Marco and C-130Hs and G-222s from 46th A/B at Pisa carried 6,100 tents, 50,000 beds, kitchens, ambulances, buses, and whatever was needed to build emergency hospitals in Albania. In Southern Italy 500 caravans were readied to host women and children while helos patrolled night and day the coastline to be ready to rescue the families that attempted to ferry from Albania on overcrowded boats.

A big trouble Italian politics and Air Force staff were compelled to face during the war was the lack of experienced pilots. In the last years the number of pilots who left the Air Force to better paid job within civilian airlines made the phenomenon looking like a mass exodus. The ItAF seems to loose its skilled personnel more than in the past and this caused operative units to have less combat ready pilots than efficient fighters. In order to face this hemorrhage the Parliament passed a bill that foresee an increase in the income of pilots of 30 million Lire (£10,000) per year for officers who decide to keep flying within the Aeronautica Militare. Anyway among the major Air Forces the Italian pilots keep to be the ones with the lowest income.

Concluding, Italy has always been at the centre of a very explosive area. Libya with its unforeseeable leader, Turkey and Greece struggling for the sovereignty on the Aegean islands, Algeria with its wild violence, Middle East in a difficult peace status and Albania always on the edge of civil war. She is considered the best “aircraft carrier” of the Mediterranean. Her forward position can make her playing an important role in all the crisis, a role that her Armed Forces are now able to play with success but also with great efforts as Allied Operation showed. The point is: are Italian politics able to let them operate without creating the usual obstacles?

At the time of writing, April 21th, the Aeronautica Militare Italiana has contributed to the Allied Force with 250 war sorties, 42 aircraft, 14 airbases hosting 450 allied aircraft. The Marina Militare keeps constantly 6 ships in the Adriatic while the Esercito Italiano has 6,000 men (with the possibility to increase to 7,500) an aroured Brigade Taurinense and 5 helocopters.