The following article was published in the February 2004 issue of Air Forces Monthly.

Although initially destined to be the pioneer unit of the Aeronautica Militare (Italian Air Force, ItAF) to join the “Fighting Falcon” community, the 5th Stormo, located at Cervia airbase on the Adriatic coast a few miles north of Rimini, received its first three F-16s on November 14th 2003, some 5 months since the first aircraft coming from Hill AFB were delivered by Lockheed Martin to Italy.

The three “Vipers” (as the aircraft is unofficially called), wearing the markings of the 23rd Gruppo (Squadron) and using the radio callsign “Veltro 01” (allocated to the Sqn Cdr Lt.Col. Fabrizio Majerna who was piloting one of the fighters) landed in Cervia at around 12:55 Local Time completing a mission lasted more than three hours that brought them from Trapani, in Sicily, Main Operating Base (MOB) for the F-16 fleet, where they had been operating in the last months, to the new Forward Operating Base (FOB).

At the time of writing 13 aircraft out of the planned 17 have been delivered to the 5th and 37th Stormo that will be equipped with the aircraft; two Gruppi out of three are already flying the aircraft; both the MOB and the FOB are already operational; and by the first half of 2004 the 23rd Gruppo will be ready to undertake the QRA (Quick Reaction Alert) shifts replacing the 12th Gruppo that is returning to the RAF all the remaining Tornado F.3s.

This is the snapshot of the current status of the “Peace Caesar F-16 programme”.

Virtually begun on February 1st 2001, when the Italian MoD officially announced that the Lockheed Martin F-16 was the winner of the selection for an ad-interim fighter needed to fill the gap between the phase-out of the F-104 “Starfighter” (to be completed by December 31st 2004) and the achievement of the “Combat Readiness” of the first squadrons of Eurofighter “Typhoon” (expected by 2010), the “Peace Caesar” programme was inked on March 15th 2001 with the signature of two Foreign Military Sales Cases. One of these documents dealt with the leasing of 34 F-16s, the other was relative to all the activities needed to satisfy the main requirement of the ItAF: to have an efficient force of 24 aircraft able to perform at least two sorties on a daily basis.

The ItAF accepted the LM proposal that foresaw the purchase of a total 45,000 flying hours between 2004 and 2010, with all the necessary logistic support, of a fleet composed by 30 F-16A Block 15 ADF (Air Defense Fighter) upgraded with the “Falcon Up” and “Falcon 2020” modifications, 3 F-16B Block 10 OCU (Operational Capabilities Upgrade) and a single F-16B ADF. Another 4 twin seats airframes would have been delivered to the ItAF to be cannibalized for spare parts. All the aircraft would have been equipped with the Pratt & Whitney F100-PW-220E engines and carry AIM-9 “Sidewinder” and AIM-120 “Slammer” air to air missiles.

The leasing included also the conversion of 38 F-104 and Tornado F.3 pilots (among which 8 would gain the qualification of IP, Instructor Pilot; 10 would became Flight Lead and 20 would be qualified crews) that would be undertaken by the Arizona ANG and the training of 119 maintenance technicians, the 60% of whom would be instructors, performed by LM personnel at Fort Worth, Texas.

The 9th Gruppo was already selected to receive the first Eurofighter at Grosseto while the 12th Gruppo was still operating the leased Tornado F.3 so the remaining three Gruppi were chosen to convert to the F-16. It was also decided to disband a Stormo, the 9th at Grazzanise at to transfer its Gruppo, the 10th at Trapani, thus concentrating at least two squadrons on the same base to ease the logistical support of the operative units.

The 5th Stormo was the first unit to retire the F-104S/ASA-M on December 27th 2002, when the 23rd Gruppo ceased its flying activity with the Starfighter moving most of the airworthy airframes to Grazzanise, Grosseto and Trapani. Following the departure of the 23rd Gruppo, Cervia airbase was closed so as to permit the beginning of the infrastructural works that the airport required in anticipation of the arrival of the first F-16s. While most of the pilots went to Tucson, Arizona, to join the 162nd FW of the Arizona ANG, a handful of crews were temporary absorbed by those Gruppi still flying the F-104, while waiting their turn to begin the training courses in the United States.

Unexpectedly, the works at Cervia airbase were longer than expected and, consequently, the first F-16s delivered on June 28th 2003, were “diverted” to the 18th Gruppo based at Trapani-Birgi airbase whose last four F-104 had been quickly moved to Grazzanise on April 22nd and whose refurbishment works had finished just in time to accommodate the new aircraft.

Unfortunately, even if the Italian officials were waiting for five reconditioned aircraft (3 F-16B and 2 F-16A) only the three twin seats (with serials MM 7266, 7268, 7269). managed to arrive in Italy. In fact as unveiled by the London Free Press on its website, on June 25th, during the first leg of the delivery flight from Hill AFB to Trapani with an intermediate stopover at Lajes, one the F-16A ADF (serialled MM7238, incidentally the first aircraft in the Italian markings rolling out at Hill on May 9th) piloted by the American pilot Lt. Col. Kurt Tek was compelled to perform an emergency landing in North Bay (Canada) after the engine went into a backup control mode which is a feature automatically activated when the primary control mode fails that compels the pilot to land the plane as soon as possible.

Three of the jets continued their flight while the other F-16A of the formation (MM 7246) escorted the aircraft of Lt. Col. Tek to a safe landing in the Canadian airport. After solving the problem these two F-16 were finally able to reach Trapani on July 2nd 2003.
The ceremony of the official delivery of the first five “Vipers” to the ItAF was held a few weeks later, on July 17th at Trapani.

The aircraft were taken on charge by the 37th Stormo but wore the markings of both 18th Gruppo and 23rd Gruppo since this latter had most of the pilots qualified on the F-16 assigned to the Sicilian airbase until Cervia had completed its refurbishment works. With the recent delivery of the 23rd Gruppo aircraft to the 5th Stormo in their MOB only one Gruppo is still waiting for the transition to the new aircraft: the 10th Gruppo at Grazzanise.

This squadron, will be the last in the world to fly the F-104 and, by the end of 2004, will leave Grazzanise for Trapani to receive the new aircraft and to join the 18th Gruppo within the 37th Stormo. The experience of the 10th, 18th and 23rd squadron with the Viper should last no more than 7 years since, by the end of 2010, the F-16 will be returned to the sender and retired. Consequently, from the 2009 the first “Viper” unit will start conversion to the “Typhoon”.

Noteworthy all 5 interceptors squadrons and the 20th OCU (Operational Convertion Unit) will be both equipped with the Eurofighter by the year 2015.

A new kind of training

The challenging task of turning an F-104 pilot into an F-16 pilot was delegated by the ItAF to a unit with proven experience in the training of the “Viper” pilots: the 162nd FW of the Arizona ANG located at Tucson, Arizona. This is an élite unit of the Air National Guard, the only equipped with 3 Squadrons: the 148th, the 152nd and the 195th FS with this latter destined to train the 38 Italian pilots foreseen by the “Peace Caesar” contract.

The training syllabus foreseen for the Italians is based on the “building blocks” concept that, with a step-by-step approach, brings the pilot to the Flight Lead qualification through more specific types of missions.
Three are the courses available for the Italian pilots: Basic Course, Flight Lead UpGrade (FLUG) Course and Instructor Course.

A fourth course is available for those senior officers (with rank not lower than Colonel) that will have to lead an F-16 equipped Stormo and can achieve a basic qualification on the aircraft with 8 sorties and 11 flight hours of the “Senior Officer Basic Qualification Course”.

The basic phase of the curriculum is based on theoretical lessons, simulator sessions and 46 missions (for a total 59 flight hours) in which the pilot learns how to fly and handle the aircraft and the initial fighting skills. The core of this phase are Basic Flight Maneuvers (BFM), basic formations, air combat training with BVR (Beyond Visual Range) engagements, Combat Air Patrol (CAP) and air to air refuelling.

Interestingly, a small but important part of the training programme is aimed to teach the pilots the interception of “slow movers”, aircraft flying at low level and speed. The post-9/11 scenarios foresee various kinds of intruders (among which also a stolen or hostile light aircraft) used as a means of destruction against sensitive targets in peacetime and especially during international summits.

A real novelty for the Italian Viper drivers is the “weight training programme” that is aimed to prepare the pilots to fly under severe accelerations and prevent the risk of G-LOC (Loss of Consciousness); one of the few risks that were unavailable on the beloved F-104. 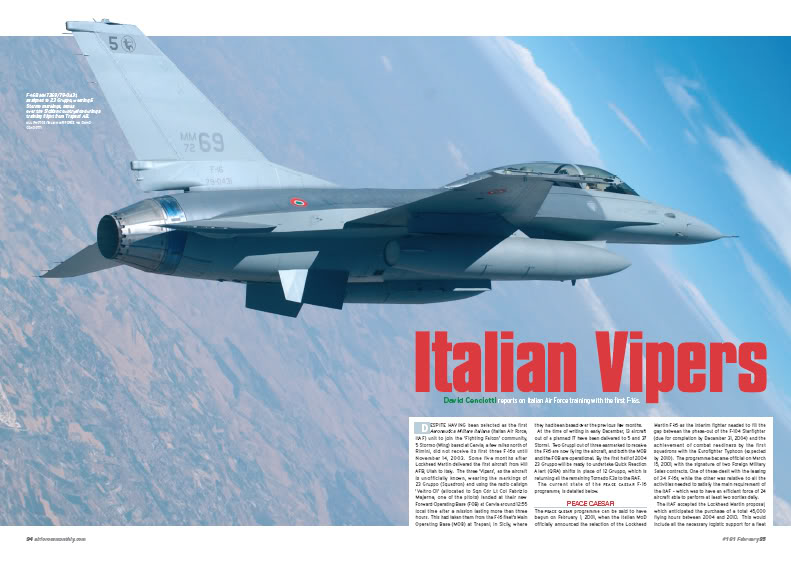 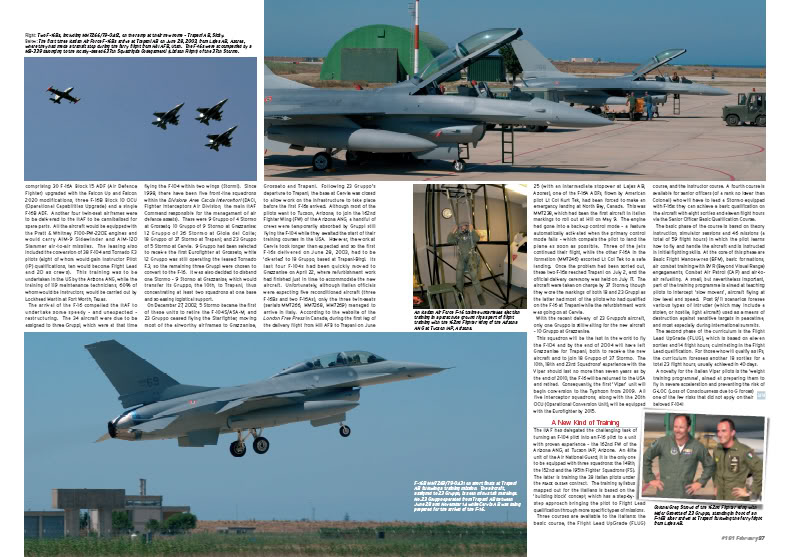