Grosseto is a nice small town located next to the Tyrrenian Sea some 100 miles north of Rome, in the green Tuscany, one of the most beautiful regions of Italy. Its quiet life changed in 1963 when the first ItAF Loockheed F104G Starfighter, at that time one of the most advanced fighters ever produced, landed on the runway 03-21 of the local military airport. Since then, the smoke trailing every F-104 became part of that area’s landscape.
After four decades of service this marvelous bird is still flying here and it will for the rest of its operative life while signs of its glorious past are spread almost everywhere with TF-104 Gate Guardians and a large amount of Starfighters withdrawn from use grouped in an isolated area of the base to be spotted by satellites in accordance with CFT treaties for the reduction of European Conventional Forces. Grosseto is today the homebase of the 4th Stormo “Amedeo D’Aosta”, composed by 9th Gruppo CWI (Clear Weather Interceptor) and 20th Gruppo OCU (Operational Conversion Unit) both flying the F-104, and of the 4th RMV (Reparto Manutenzione Velivoli) aircraft maintenance squadron.

The 9th Gruppo is one of the squadrons of the Aeronautica Militare Italiana whose duty is to provide Air Defense of Italian territory above its land and national waters, 24 hours a day, 365 days a year. As for the 23rd Gruppo at Cervia, 18th Gruppo at Trapani and 10th Gruppo at Grazzanise it is equipped with 12 F104ASA-M (Aggiornamento Sistema d’Arma-Modificato, upgraded weapon system-modified) the latest version of the Starfighter. It is no longer an AWI (All Weather Interceptor) squadron but became a CWI since the Aeronautica Militare has leased 24 Tornado F3 from the RAF . Within the ItAF, that is the only Air Force still flying it in the World, the “One-o-four” flew missions to enforce the embargo to Libya, to protect Malta and Lampedusa, to escort hi-jacked liners as in the Achille Lauro crisis but it was not until March 24th 1999, 36 years after it was taken on charge, that this fighter had its combat first. For the Allied Force operation needs at least 8 aircraft, from 9th and 10th Gruppo, were deployed to Amendola and 4, belonging to the 18th Gruppo, to Gioia del Colle. Because of its poor endurance, having the assets as near to the theater as possible was paramount. A Gruppo, the 22nd at Istrana, NE Italy, was already disbanded and consequently Starfighter from both Grazzanise, Grosseto and Trapani deployed on the Eastern flank in order to provide the last air defense shield in case attack. Alert scramble became more frequent. F-104s were tasked to give support when other missions had to RTB before the replacing flight had reached CAP point. In these cases after take off the Starfighters headed to the Adriatic, even if they maintened quite near to the Italian coastline, just a few miles off shore. Patrol time was around 40 minutes under control of “Magic”, the E-3 AWACS on duty, that continuously broadcasted the air picture for the Italian interceptors. When relief arrived or at “Bingo” the F-104s headed back. While deployed to Amendola aircraft were ready to scramble anytime and the 2 aircraft were always armed and checked on ramp. The fighter configuration was standard with the two 640 liters tip-tanks, one AIM-9L Sidewinder underneath the starboard wing and one Alenia Aspide underneath the port one. There wasn’t any HAS (Hardened Shelters) available because the base was busy and so all aircraft were grouped next to the duty runway. After some years in which take off time had been extented as a consequence of the new European and Mediterranean scenario, the war compelled the crews to be ready for departure again in five minutes, even if F-104s often took off in 3 minutes.
In war or during peacetime the procedures are the same. Pilots sleep dressed with their flightsuits at the first floor of an “alert building” or inside tents positioned next to the “alert shelters” that are located on the “alert taxyway”, the nearest to the runway. The 9th Gruppo is settled in the northern part of the Grosseto airport next to the runway 21 threshold. The aircraft are parked inside HAS, already checked, with canopies opened, helmets on the Martin Baker and the generator units always plugged. As soon as the alarm siren starts ringing pilots and ground crews rush to the shelters, strap in and align the INS. After a quick start-up they taxy into the runway, line up, take off and climb. Scrambles are often needed only to identify incoming aircraft whose nationality is unclear or to prevent aircraft without diplomatic clearance from entering national airspace.
“Of course it is still an old generation fighter” one pilot explains “especially if we think to use it for Beyond Visual Range engagements but showed itself reliable and still effective also in the Allied Force operation as an interceptor. The new Inertial Navigation System and especially the GPS, the Have Quick UHF radio, the radar altimeter, the upgraded OS (Optical Sight) and Air Data Computer are the main features of the last of the “Manned Missiles” and make it sensibly better than the old ASA (Aggiornamento Sistema d’Arma). It is not very comfortable yet but the cockpit is no longer in 60s style and the enhancements make it a good fighter, especially if flown exploiting its speed, acceleration and shape that make it very hard to see. We are trained to exploit all the best this old aircraft offers”.

The 20th Gruppo is located in front of the 9th Gruppo apron, opposite side of the threshold of the runway 21 in the northern part of the airport.
This unit is responsible for the training of all pilots attending the F104 flight courses: student pilots coming from advanced training on the MB-339CD of 61st Stormo at Lecce; pilots who are attending the courses to became instructors or (rarely) pilots coming from Tornado or AMX converting to the 104. The squadron recently acquired the M version of the old TF-104G, an aircraft with a cockpit much similar to the single seat version. The course is made of 14 missions (needed to achieve the F104 qualification): the 12th consist of the first solo flight with the Starfighter and it is flown with an instructor “chasing” the attendant with another aircraft; 13th mission is acrobatic while 14th is a formation flight exam. After successfully completing the first 14 missions the pilot achieves a Limited Combat Readiness (LCR) by flying 16 training radar interceptions and Air Combat Training. This phase of the training is important because, after LCR, pilots are assigned to an operative unit and in order to be employed in the Quick Reaction Alert duties have to have already gained a good background of daily and night air defense practice missions. Low level missions are also flown because the 18th Gruppo of the 37th Stormo at Trapani keeps its dual role of interceptor and fighter bomber squadron.
The training programme lasts from 6 up to 12 months depending on various factors, the most important of which is the number of pilots involved and the availability of efficient aircraft. Weather conditions are mainly good and don’t affect flying activity sensibly.
Training for becoming a Starfighter instructor is slightly different and only pilots with 700 flying hours on the aircraft can attend the course. This consists of 20 flights, 10 of which are flown from the backseat to get used with the poor frontal visibility experienced by the IPs. In this part of the training the senior instructor often performs some incorrect maneuvers in order to test the pilot’s readiness in correcting student pilots mistakes.
Instructor course foresees also cross country navigations and for this reasons, from a few years, ItAF is sending some of its 12 TF-104 (5 of which are “M” version while another 9 “G” serving as reserves) abroad, to let them participate to the TLPs and multinational exercises like Dynamic Mix and Distant Thunder. This kind of training is important because, even if the aircraft is not effective in current scenarios, by partecipating in large exercises involving many king of aircraft, pilots get a “taste” of today’s war radio procedures, phraseology and planning.
During TLP but also at home, TF104 pilots have the possibility to operate with E-3 AWACS almost on a daily basis. The main training areas are the 4 zones of the Grosseto CTR, the Restricted 48 North and South and the Temporary Supersonic Area 73 and 74 while Sardinia ranges are often used during deployments to Decimomannu for DACT (Dissimilar Air Combat Training).

The 4th RMV, adjacent to the 9th Gruppo, on the western part of Grosseto airbase, is the unit responsible of the 2nd level of maintenance of the whole ItAF Starfighter fleet. Maintenance cycle is based on 3 levels: pre and post flight checks aside, the 1st level is performed at the homebase by the local CM (Centro Manutenzione, Maintenance Center) when the aircraft has flown 37 and 75 hours; 2nd level is a series of particular inspection carried out in Grosseto while 3rd level is the most in-depth maintenance, made at Alenia facilitities in Torino Caselle. This latter is performed every 900 flying hours (that are flown more or less every 4 years) and it is so accurate that it takes about 1 year.
As said, the 2nd level is performed at Grosseto meaning that all squadrons send their aircraft to the 4th RMV every 150 and 300 hours; this is the reason why Grosseto often hosts aircraft from other squadrons. The 4th RMV is also responsible of the training of all the ground crews employed by each Starfighter squadron.
The F-104 has an estimated life time of 9,000 FH. Considering that the average flight time logged by the fleet currently serving in the ItAF is 4,000 hours, the aircraft will fly safely until the EF-2000 will be delivered to the operative units.
Long live the Starfighter! 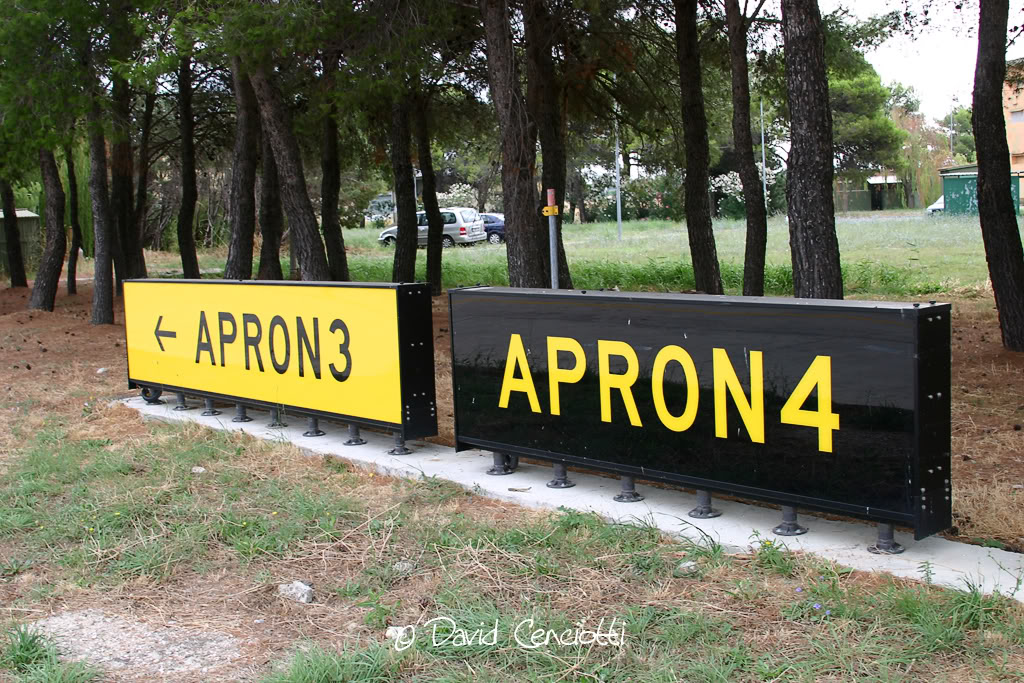 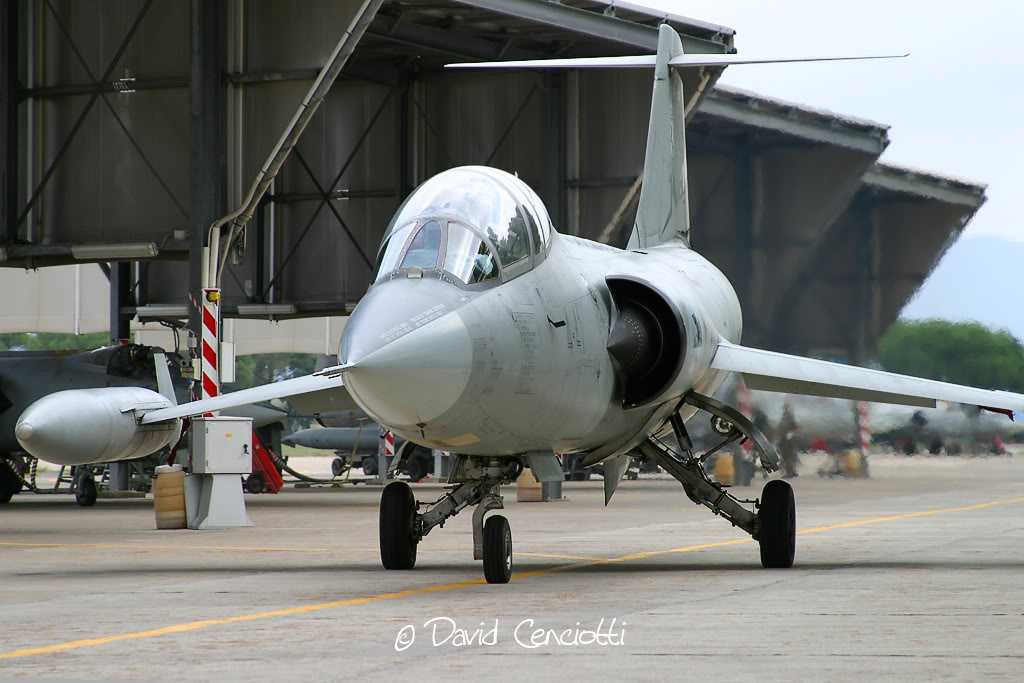 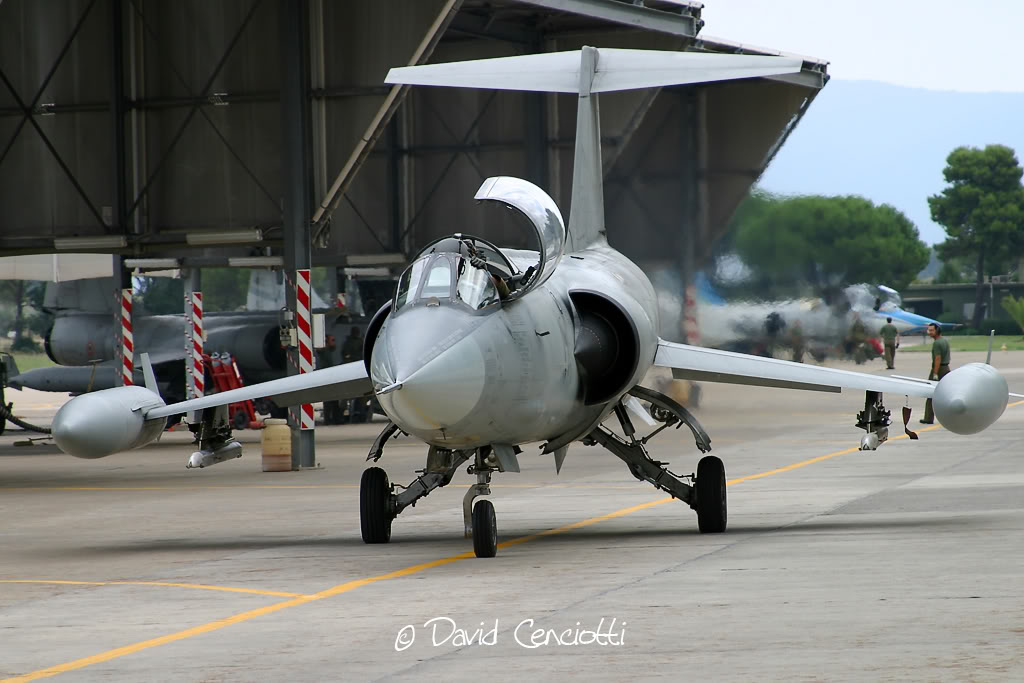 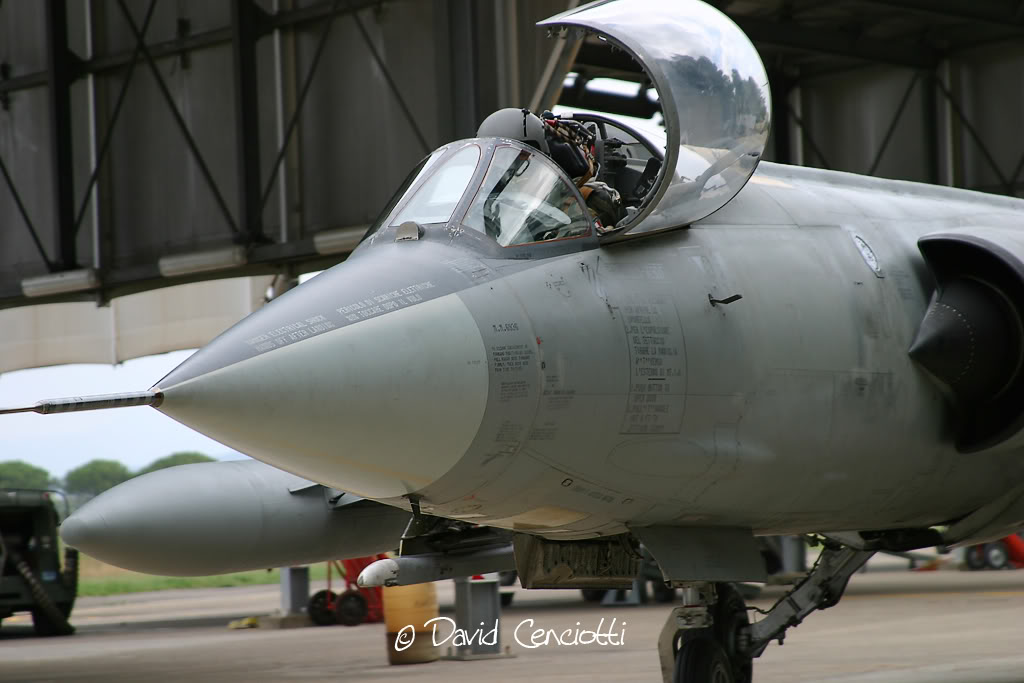 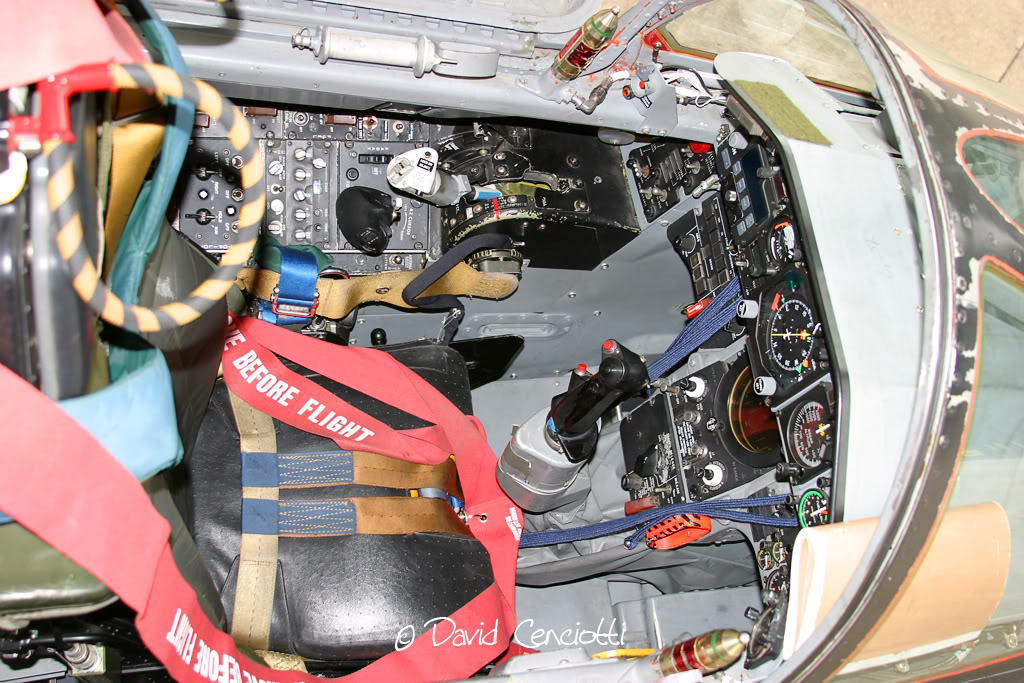 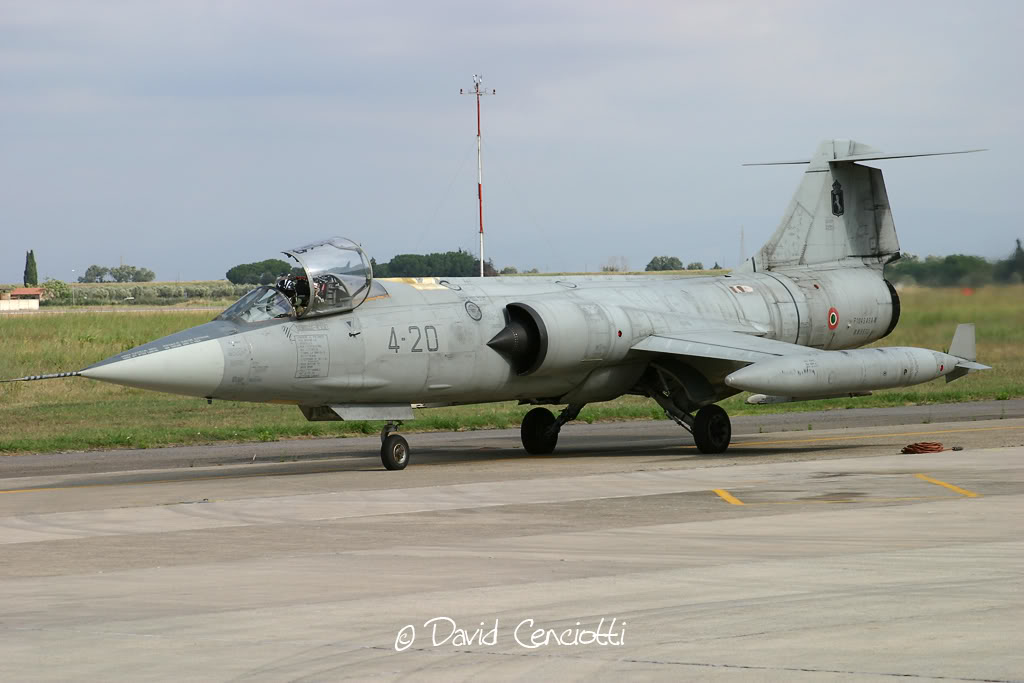 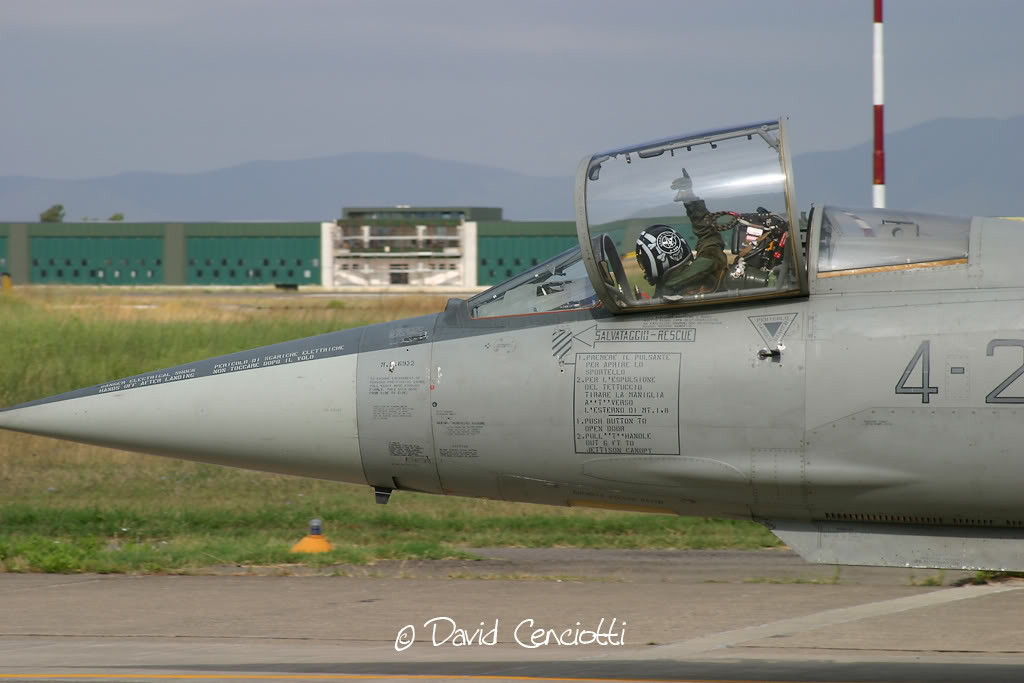 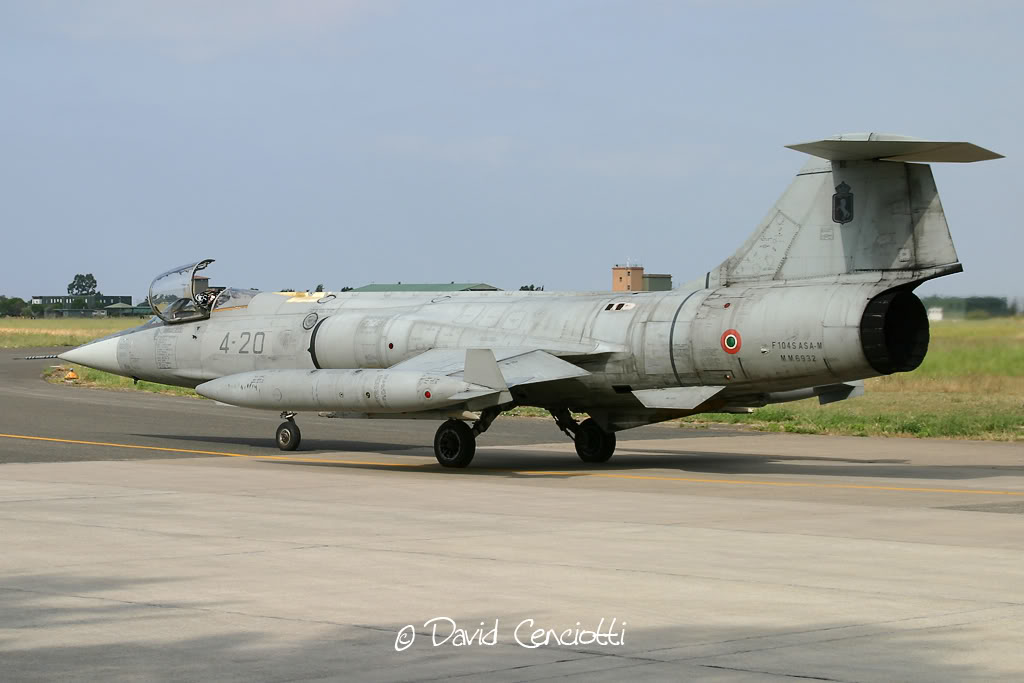 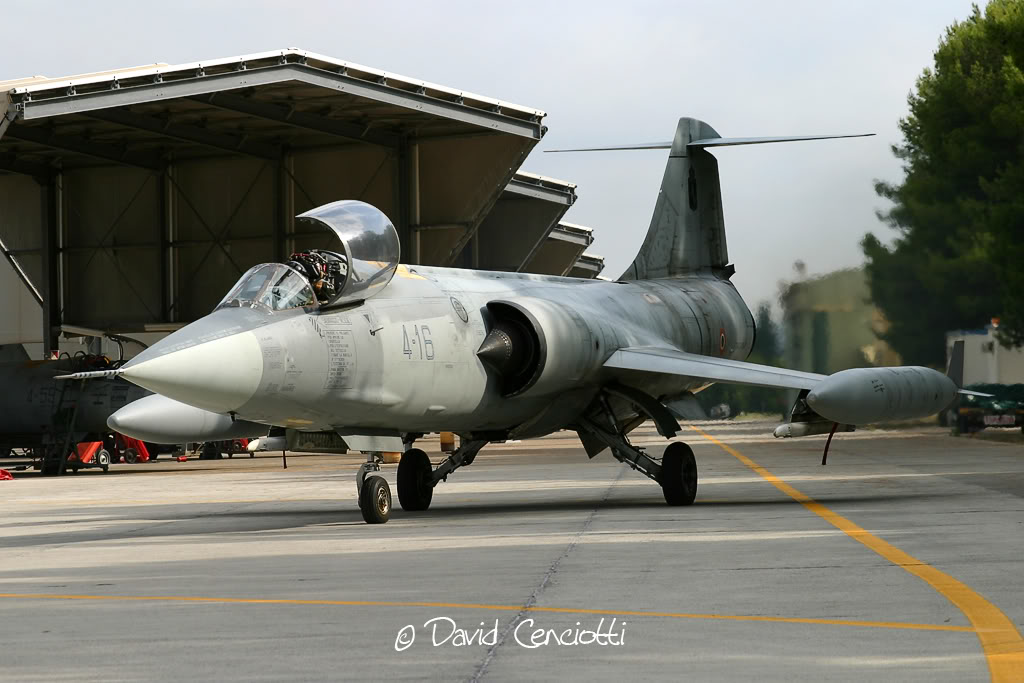 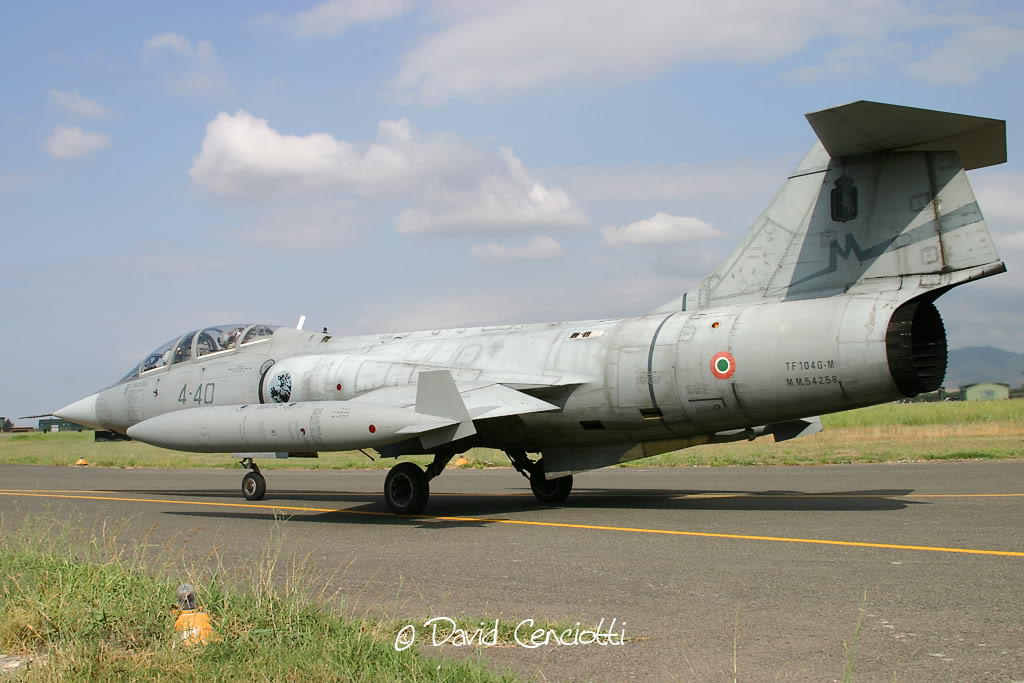 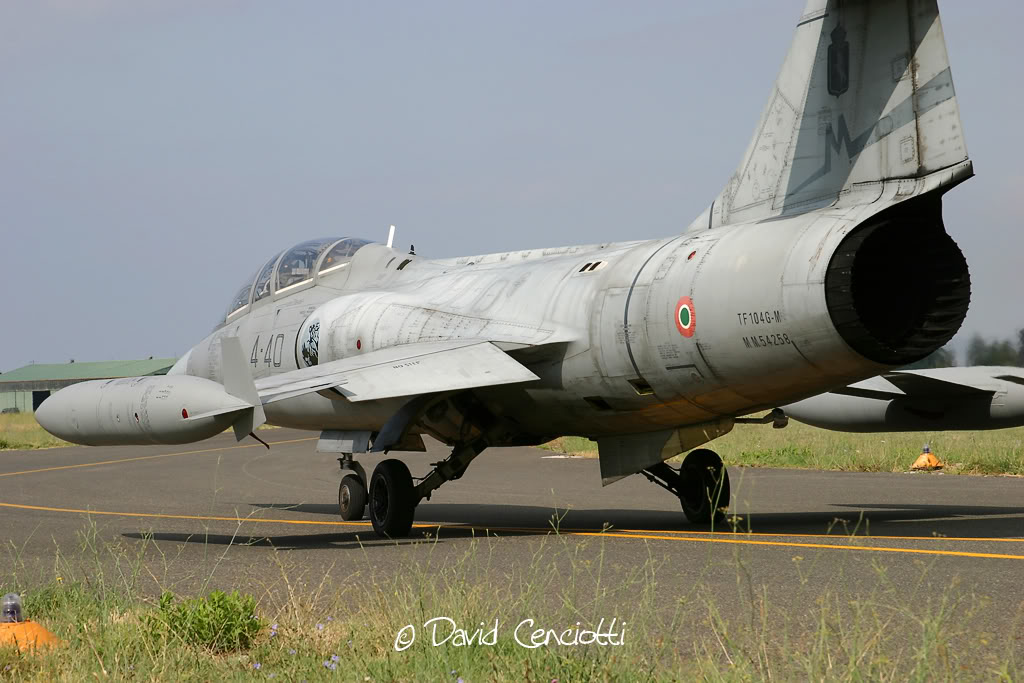 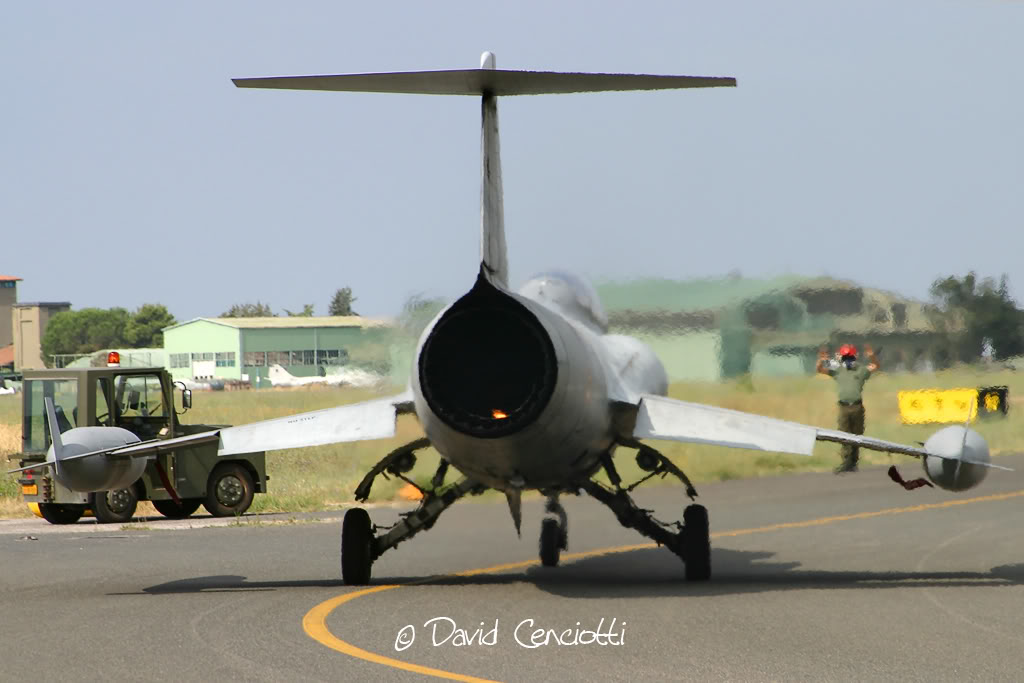 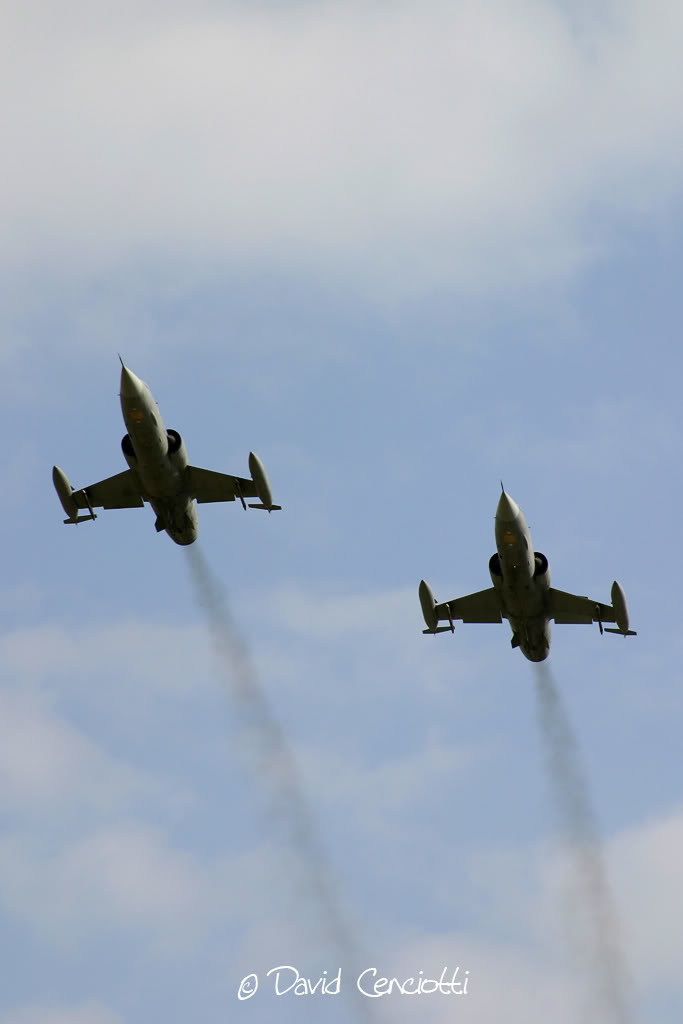 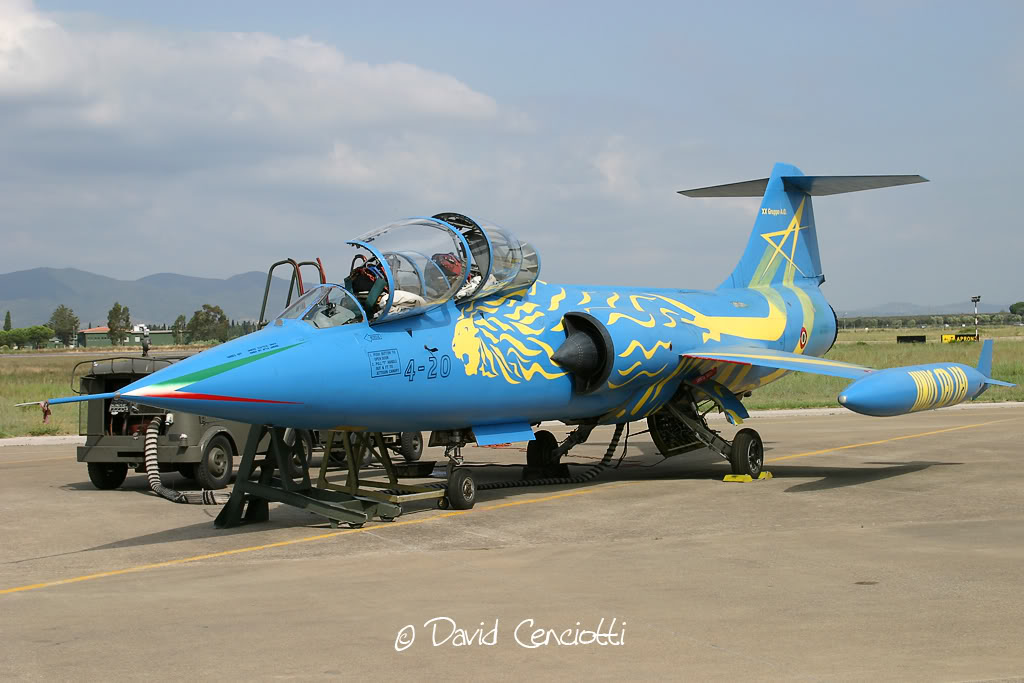 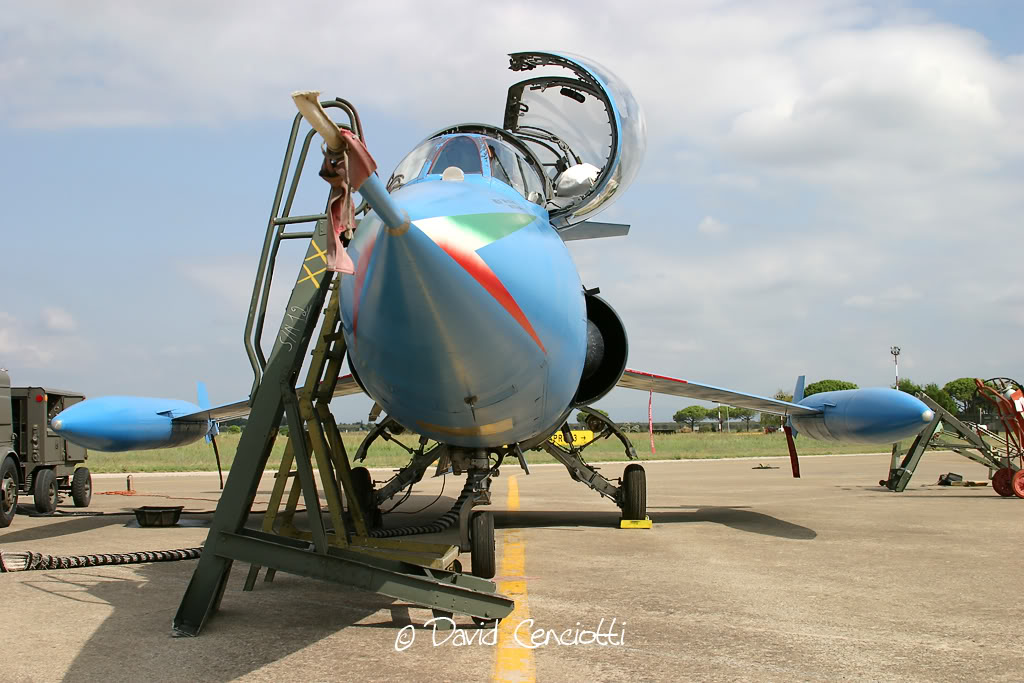 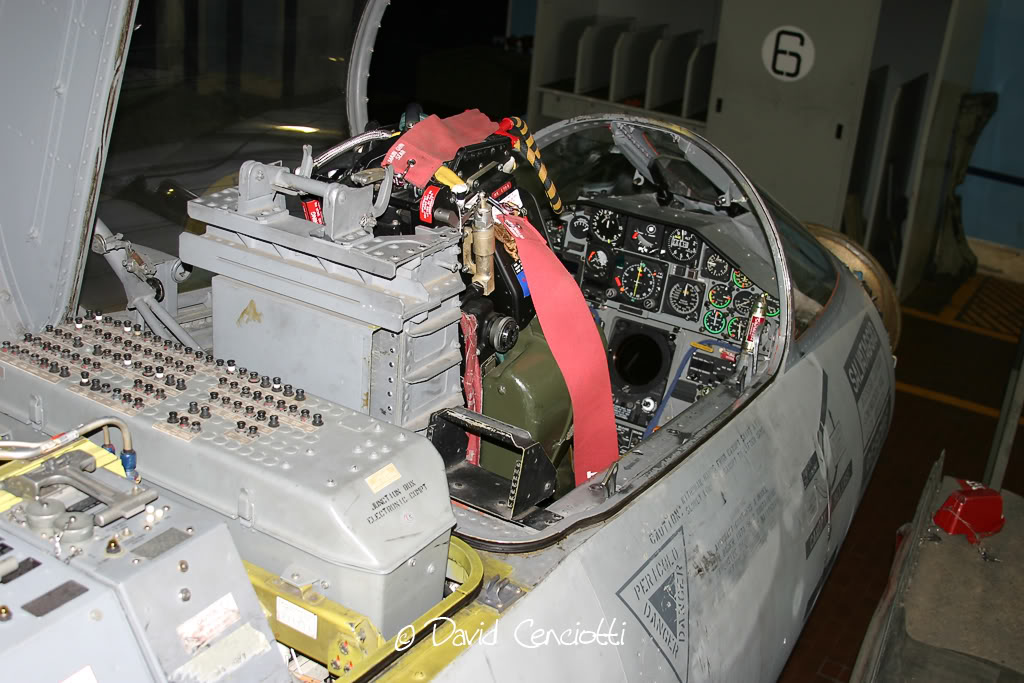 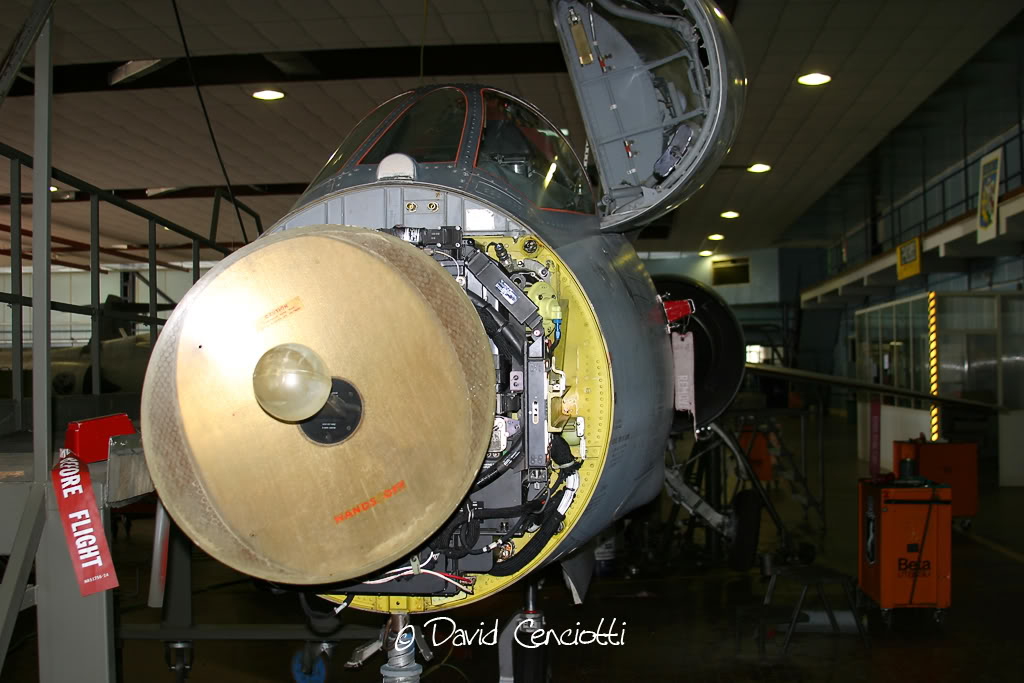 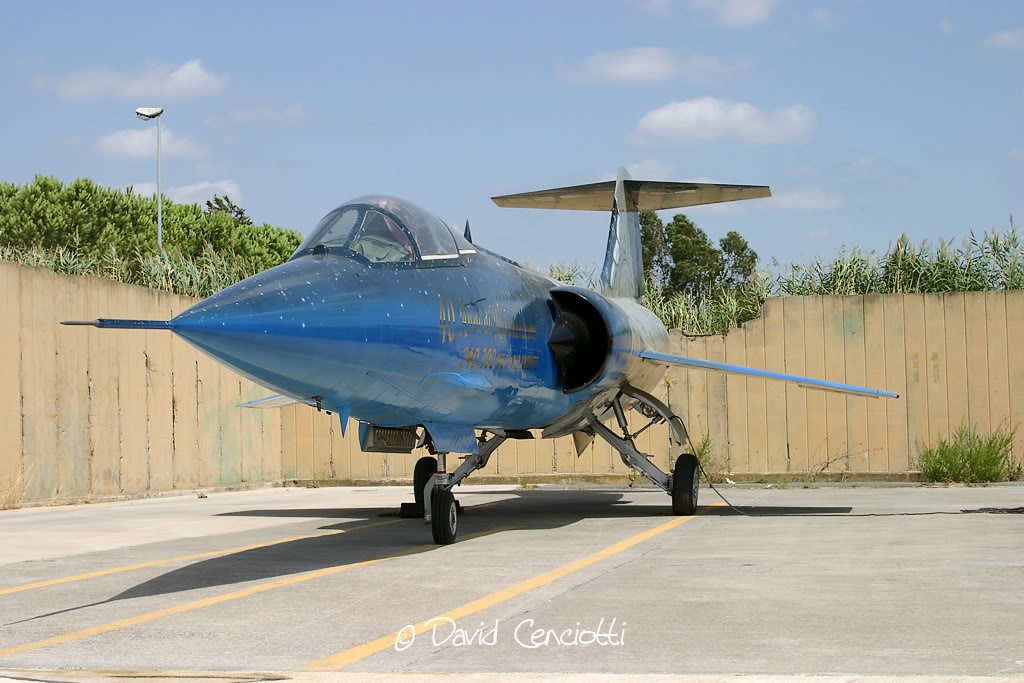