I tighten my oxygen mask, lower the dark visor of my HGU-55G helmet and give a final check to the camera that I hold in my right hand. The aircraft passes the arresting cable of RWY 03 and stops on the left wing of another Starfighter, the MM54553 “4-44” piloted by Col. Germano Quattrociocchi (former Cdr of the 4th Stormo) and Capt. Daniele Locatelli, another IP with almost 2,000 hours on the F-104. We start the engine run and give a quick glance at the instruments. 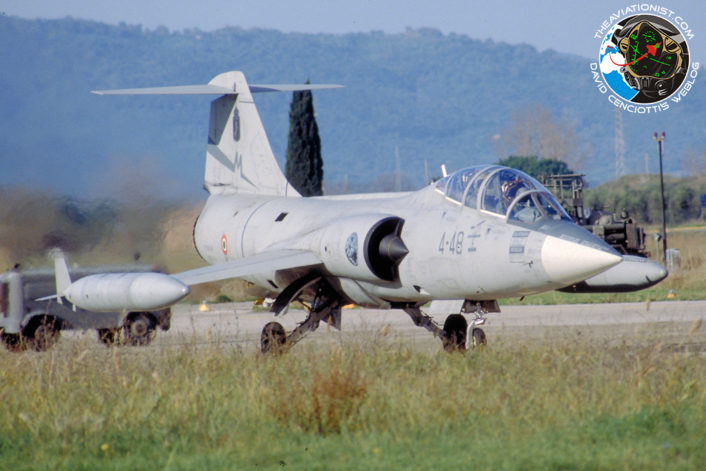 Everything is running smoothly, we are ready for departure.

Weather is just fine. Scattered clouds in the vicinity of the airport but mostly clear skies inside Grosseto CTR. We will perform a low level navigation towards the Northern edge of the control zone, then we will head to the coastline proceeding again southbound. Finally we will reach the Scansano area that we will engage for about 10 minutes to perform some aerobatic maneuvers in formation.

“Tower, Mix 153 is ready for take off” is radioed by the leading aircraft.

In a second, the throttle goes forward to the stops and the aircraft vibrates violently boosted by full afterburner: speed’s alive! Actually, I don’t experience the so-called “kick in the bottom” as the acceleration seems to be stunning but gradual.

“Their engine is running better than ours” is the comment that Andrea gives in the intercom as he notices that the leader is accelerating more than us and our distance with the other aircraft is progressively increasing.

We have rolled for some 900 meters and with the speed passing above 190 knots we rotate. Number one is clearly visible through the windshield 100 meters our 1 o’clock. 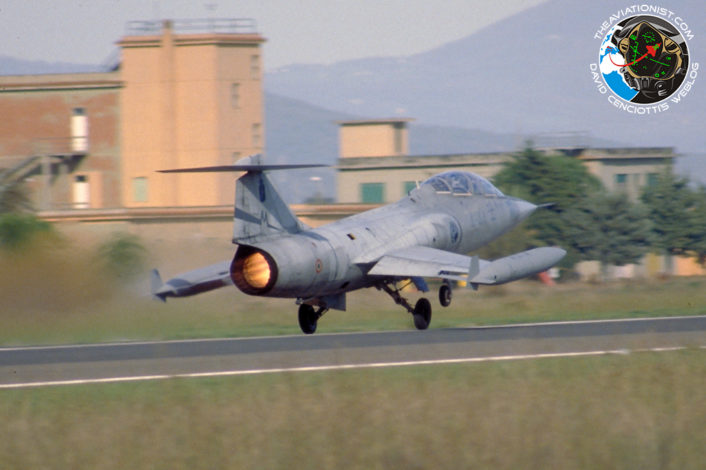 We are still in full AB trailing the smoke getting out of the leader that has already reduced to Military thrust. As Andrea gets too out of the afterburner the aircraft reacts with an abrupt reduction of speed and the first thing I think is that we are experiencing an engine stall and I will have to eject since noise is almost undetectable.

We join up with the other TF104 in a gentle left turn towards the town of Siena. 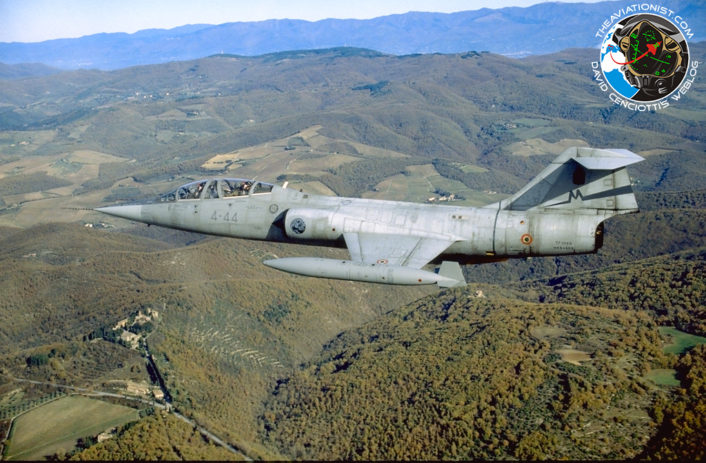 Even if we are flying from only a couple of minutes, I can already notice that the flying attitude of the Starfighter is completely different from the other jets I’ve already flown: the “missile with a man in it” is much more stable (and consequently less maneuverable) and it is a perfect photographic platform.

No turbulence, no vibrations, the aircraft seems to be running on the rail track. Furthermore, cockpit is not so small as advertised and I have enough space to take the pictures (even some self-protraits), to remove and load films in the camera, to watch the instruments and the nice Tuscany countryside.

Flying at more than 420 knots we soon reach Siena that we overfly in a large left-hand turn towards the Tyrrhenian sea. 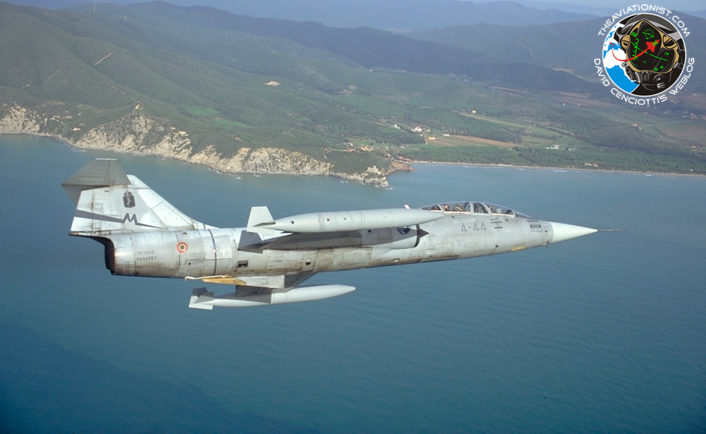 It is the moment to become the “pilot in command” of this bird. “It’s yours” Andrea tells me. We are now in spread formation and after moving the camera to the left hand I put my right one on the stick.

The aircraft continues its flight without even noticing the change. I test the reaction of the F-104 by turning slightly to the right and to the left of our path.

Now the difference with an MB.339 is much more evident: the stick is very hard and rolling the fighter on the longitudinal axis requires more strength. In a few minutes we are flying above the sea heading South, with Andrea back in command.

Beyond the odd tip tanks I can see the beautiful coastline on my left and Elba Island on my right. 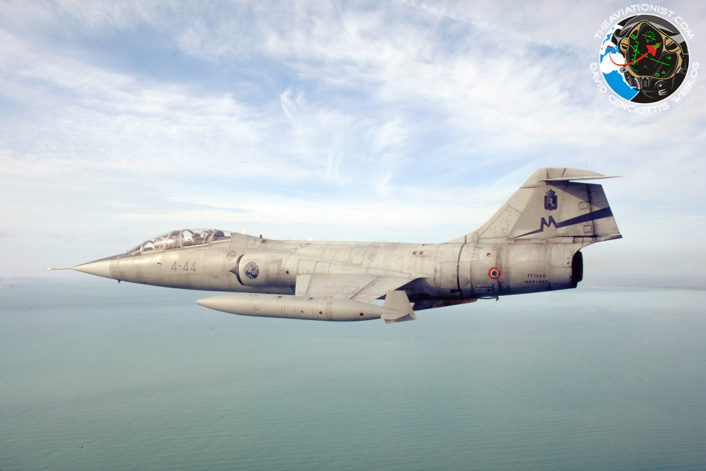 As we are entering the working area located a few miles south of the airbase, Grosseto Approach informs us that there is another flight of F-104, slightly higher, our 9 o’clock, leaving the zone to land. Andrea immediately spots them while, despite my efforts, I’m not able to catch them: he is a former interceptor pilot and his eyes are very well trained to see targets very far away.

As the area is completely clear we climb to higher levels to start some aerobatic maneuvers. First of all, we begin with a couple of wingovers.

Despite some buffeting, the aircraft is again much stable and keeping the formation is not so difficult although, especially during the initial climb, in the first quarter of the loop, additional dry thrust is essential. Checking pitch is paramount when the F-104 maneuvers vertically since exceeding 15° AOA (Angle of Attack) would probably lead to an unrecoverable pitch-up. Then, we perform some barrel rolls that we complete in nose-down position in order to gain speed for the subsequent loop.

Although we don’t exceed 3 – 3.5g I struggle to keep my camera pointed to the leading aircraft and I finally have some rest as we are on top, inverted, with the G-meter dancing around no gravity point. A quick look at the fuel indicator makes me realize that this is going to be the last maneuver. 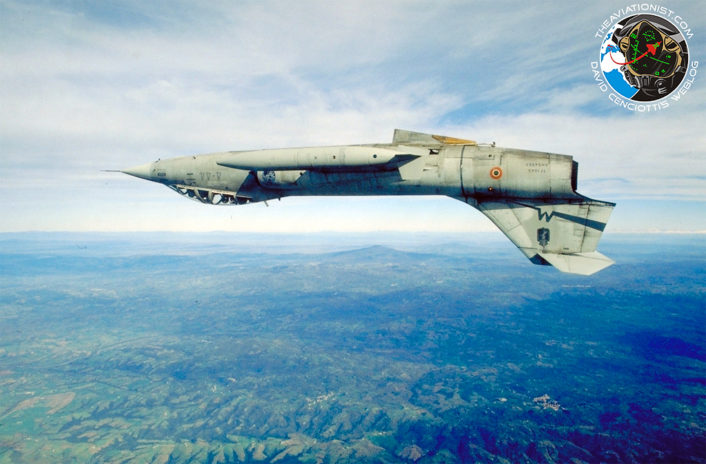 We get out of the loop at low level with our nose pointed towards the Southern Gate for a VFR recovery in Grosseto. We will chase the leader that will land before us then we will perform one last visual pattern for a “full-stop” landing.

Weather is still good over Grosseto airbase as we overfly at 3.000 feet the Initial Point with the runway 2 miles ahead of us.

“Mix 153, on the break!”: reaching the middle of the runway the leader banks left to enter the downwind leg of the approach pattern and after a few more seconds we follow him. Base turn completed, we are established to the left of the runway as the TF-104 “4-44” of Quattrociocchi and Locatelli lands on runway 03. We retract the undercarriage and perform another pattern. 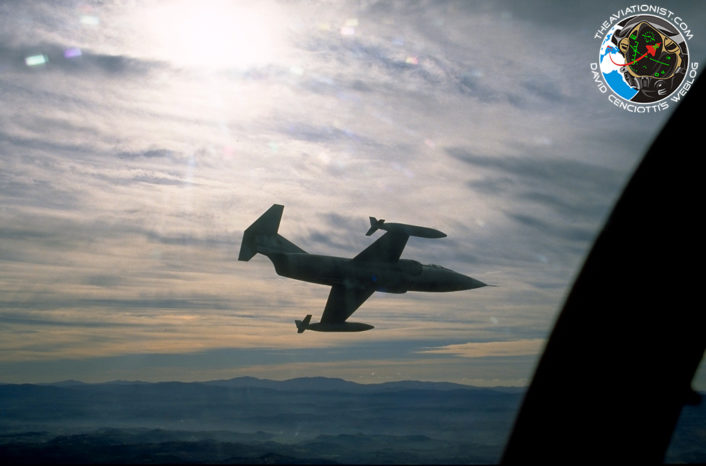 Flaps down to the landing position, three green lights confirm the gear is down and blocked, landing light on, antiskid is operative: we are ready for final approach. Andrea banks left to intercept the final approach course to the runway. Our Indicated Air Speed is something between 170 and 180 miles per hour. Since the F-104 uses a Boundary Layer Control that blows engine air over the trailing edge of the wing, throttle must be set so as to keep RPM well above 80% thus providing the proper airflow needed to prevent stall. That’s why landing is so fast and even more shocking than the take off for a private pilot like me not used to land so fast.

Runway threshold passes below us at 150 knots and few moments later we touch the runway with no flare. Speed is still too high to apply the wheel brakes so Andrea deploys the drag-chute to reduce our landing roll. The aircraft suddenly decreases its speed and we finally clear the runway at the last taxiway on our right. Taxiing is uneventful and we soon reach the 20th Gruppo apron where we park our bird. As I get out of the cockpit I realize that I’ve just spent 1 hour flying with the legendary F-104: an experience I will never forget. 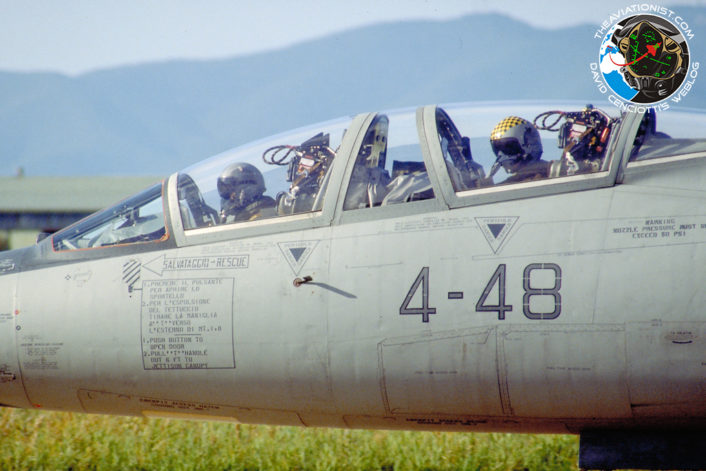 Some years after flying the TF-104, I’ve had the opportunity to fly also in the Typhoon from Grosseto airbase. By geo-referencing the shots, I’ve built the path followed by the aircraft and put together this graphic that gives you an idea of the different kind of visual pattern the two jets. As you may see, the red line (that shows the Typhoon’s pattern) is much closer to the runway than the blue line: indeed, the visual pattern for a Starfighter was quite large and flat.

The infographic below provides a comparison between the Eurofighter Typhoon (TF-2000A) and the Starfighter (TF-104G-M).