Although many details of the current involvement of the Aeronautica Militare Italiana (Italian Air Force, ItAF) in Afghanistan are kept secret in order to prevent confidential information from being disclosed while the operation is still in progress, we had the possibility to talk with Maj. Fulvio D’Antonio, commander of the 21st Gruppo, who explained to AFM the missions flown by the ItAF air component in support of ISAF (International Security and Assistance Force) multinational force. David Cenciotti met him in Grazzanise, where the 21st Gruppo, after completing the second tour in Afghanistan in December 2007, is currently preparing for the next deployment to Kabul.

The 21st Gruppo is one of the most famous squadrons of the ItAF: formerly belonging to the 53rd Stormo at Cameri, flying with the F-104 and later with the Tornado F.3, it has been a member of the NATO Tiger association since 1968. The squadron moved to Gioia del Colle on March 1st 1999 and operated within the 36th Stormo until March 1st 2001, when it was disbanded. The squadron was officially reactivated on March 23rd 2006 within the 9th Stormo at Grazzanise, with the aim to create a deployable flying unit able to perform a large variety of combat duties: MEDEVAC (MEDical EVACuation) and CASEVAC (CASualties EVACuation) missions, CSAR (Combat Search And Rescue), Special Operations support, short range transportation and surveillance, in “out of the area” scenarios. The 21st Gruppo has been operating in support of ISAF from April 22nd 2006 (less than one month after its reactivation) and has already completed 2 deployments in theatre; considering that the first deployment lasted from April to August 2006 and the second one saw the squadron operating from Kabul from May to December 2007, during the last two years, the squadron has flown the majority of its flight hours in Afghanistan. In order to fulfill the new tasks the 21st Gruppo received the first 3 AB.212ICOs (Implementazione Capacità Operative, Operational Capabilities Implementation), delivered at the end of 2005 to the 609th Squadriglia Collegamenti (Liaison Flight), whose pilots and aircraft were “absorbed” by the 21st Gruppo. As D’Antonio explains: “The modified model is very different from its predecessor, the AB.212AMI-SAR.. It is equipped with two manually activated Flares dispensers for self-protection and can carry two MG 42/59 caliber 7.62 mm NATO machine guns on both sides of the fuselage. It wears an armored cockpit and fuselage to protect the 2 pilots and 2 gunners from small arms; noteworthy, the rudder area, vulnerable to bullets shot from the ground because of the observation windows, has been shielded with 3 inches of kevlar”. The new outfit has sensibly reduced the helicopter’s payload: the increased weight cost the aircraft half of its original endurance, currently limited to 1 hour and 40 minutes. “Even if the endurance is lower than that of the AMI-SAR, it is enough to operate in support of the Kabul Multinational Brigade within the Kabul AOR (Area Of Responsibility), an area of around 35NM radius centered on KAIA (Kabul International Airport), base of the Italian Task Force, that is our area of operations in Afghanistan. On the other hand, the side effect of the increased weight is that, at an average height of 7.000 feet AMSL (Above Mean Sea Level), with ground temperature often above 40° Celsius, the AB.212 has not enough excess power to recover a survivor from the ground with the hoist from a hovering position. For this reason, aircraft deployed to KAIA are not equipped with the winch. We can carry up to 3 passengers and a stretcher but we have to embark them from the ground”.
Initially, the three Italian AB.212ICOs were supposed to perform mainly “Command Flight” duties, carrying the ISAF Commander within the Kabul AOR. However this kind of sortie was rarely tasked and the majority of the missions flown by the Italians were on-call MEDEVAC, recce and tactical transportation flights. Both kind of missions were flown with a formation of two helicopters, with the third aircraft acting as a spare. “In theatre, flying unpredictable paths in tactical formation is paramount: despite not being highly lethal, the Afghan scenario is still hostile with major risks posed by RPGs and kalashnikovs. This means that you have always to follow a different route, flying at low level to exploit the terrain masking, providing mutual support to the other helicopter’s 6 o’clock area”. Flying in pairs is also important to provide radio relay and cover should one of the helicopter need to land to recover personnel or in case of crash landing. “On August 21st 2007 one of our helicopters experienced an in-flight emergency and crash landed in a narrow valley not far from Kabul. The other helicopter’s presence was vital for the subsequent successful escape: first of all, it radioed to the base the Mayday and, acting as On-Scene Commander (OSC), broadcasted all the most important information to the Regional Capital-Command (RC-C) in Kabul and to the ground and air assets involved in the rescue operation. Second, it provided an armed cover to the injured crews until the on-call MEDEVAC helicopter reached the accident area”.
In Afghanistan, the 21st Gruppo has gained an important experience flying a new aircraft, in a new role. However it has developed only a few of its possible employements: those kinds of mission required to support the Battle Groups operating on the ground around Kabul. The next step is to become a Special Operations squadron able to operate with joint special forces. “The Gruppo was reactivated just 1 month prior to the first deployment. All the personnel came from the 609th Squadriglia, a small unit whose mission was to perform liaison flights and SAR. Becoming a squadron, we were compelled, “on the fly”, to learn a new job and to deal with the new organization, and we had to face also some minor troubles caused by the merge of the 21st Gruppo with the personnel of the other two units that were flying with the AB.212 (the 604th Squadriglia at Grosseto and the 651st Squadriglia at Istrana) that are now completely integrated in the Squadron. Each time we returned home from the deployment we spent most of our remaining flight hours training new crews, enhancing standardization and crew cooperation, developing new tactics, and we had little time left to achieve new combat capabilities. Now I can proudly affirm that we are a fully standardized squadron with a good CSAR experience, ready to be deployed anytime (probably in June 2008) and we have just begun thinking about our next role: the Special Operations”. 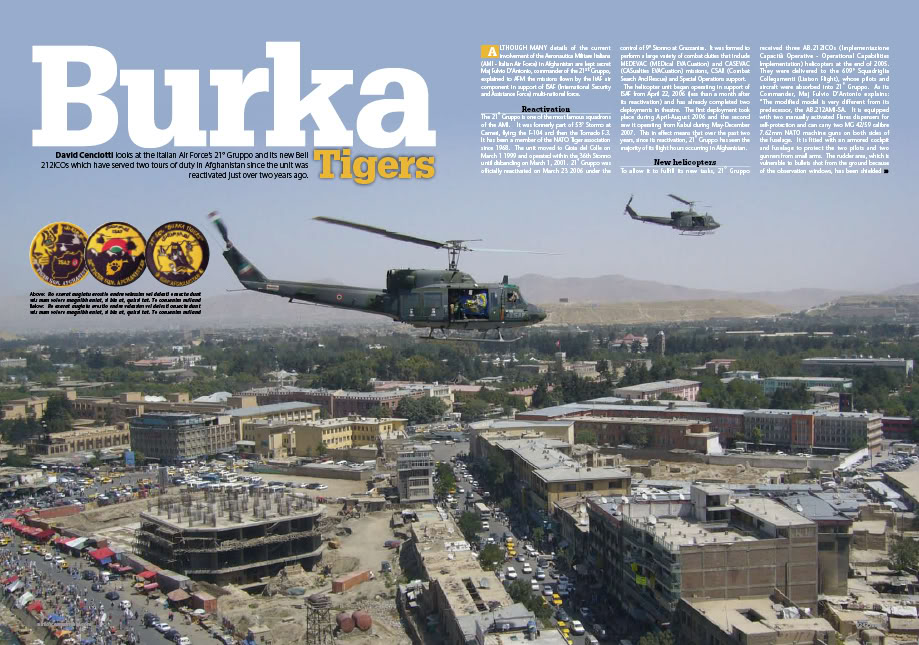 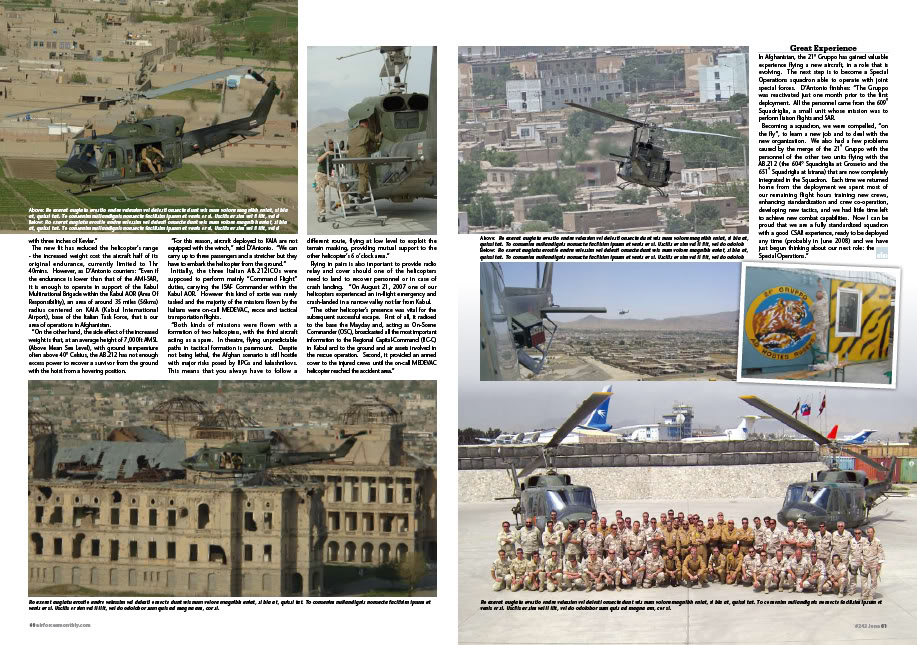