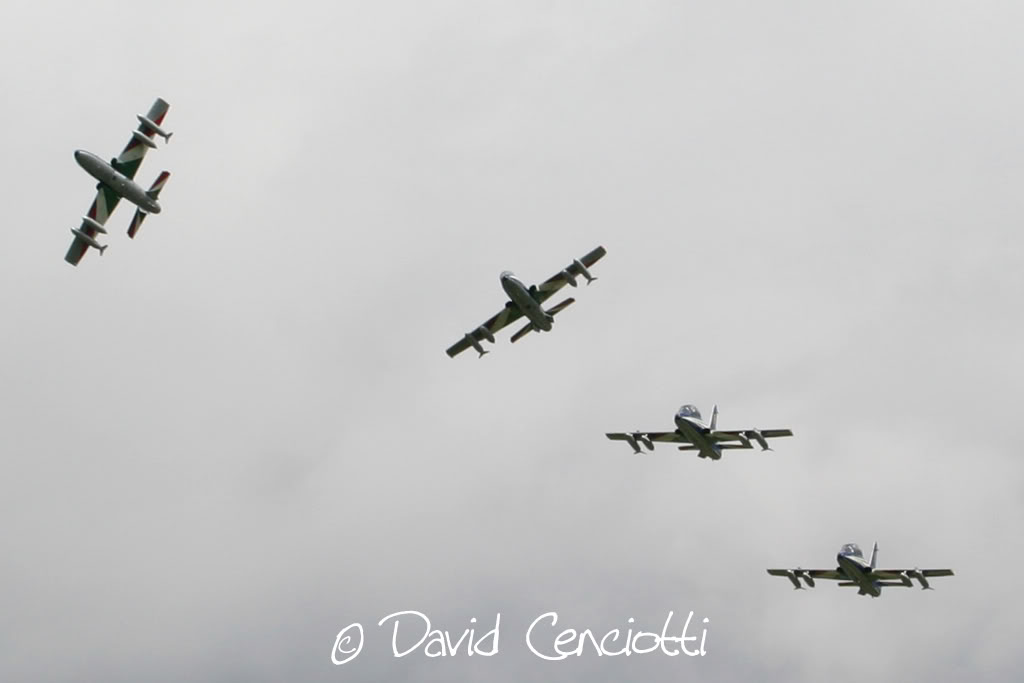 This is not a composite picture showing the same aircraft during a turn. It is a photo taken in 2004 at Grazzanise airbase and depicting the first section of the Frecce Tricolori performing the “break” over the runway. The “break” is a common maneuver in military aviation that enables aircraft belonging to the same formation splitting and getting the mutual separation needed to land one by one.  Frecce, as well as Red Arrows, make very aggressive and spectacular low level breaks, but the “break” is simply a part of a common VFR / VMC procedure that can be performed in different ways, depending on the flying characteristics of the aircraft, on aircraft load and weight, on the airport location, on the purpose of the mission, etc.  For instance, the break is also the standard entry to the landing pattern used by conventional aircraft on the carriers.

As said, the break is just a step of the approach procedure.  Generally, during a VFR recovery, the approaching aircraft has first to overfly an Initial Point, that is an easily recognizable site on the ground located a few miles from the airport (sometimes on the extended centerline of the runway, sometimes displaced to the right or left of it). From the IP the aircraft heads directly towards the threshold of the runway that is overflown at an altitude dependend on the airport elevation. Overhead the runway, each pilot performs the “break” a few seconds after the preceding aircraft, banking violently to the right or to the left of the runway centerline (in accordance with the airport procedures) in order to reduce speed and to enter the downwind leg of the visual pattern, that is a course parallel to the active runway laterally displaced by the field by 1 or 2 miles. As the aicraft slows to the approach speed the pilot configure his fighter for landing, selecting the correct flap position and lowering the landing gear. Beyond a point located across the touchdown point the pilot begins a descending 180° turn towards the runway (the so-called “base turn”) to intercept the final approach course. Flying characteristics of the aircraft affect the length of the downwind leg and final approach distance. The F-104 made very flat approaches performing downwind legs longer than those made by more agile MB.339 or F-16.

The tour brought the Italian jets belonging to the Reparto Sperimentale Volo (Italian Air Force Test Wing) and the Frecce Tricolori display team to Qatar, Bahrain and Kuwait. With the display of the T-346A Master […]

Published in September 2010, by the DeAgostini (one of the most important Italian publishing houses) with the contribution of Aviator Edizioni, my latest book, “Frecce Tricolori – un volo lungo 50 anni” represents the official […]