In the night between Jan. 24 and 25 a US joint Special Forces team (including the Navy SEALs) team freed two Western workers kidnapped in Somalia on Oct. 25, 2011. They were an American woman, Jessica Buchanan, and a Danish man, Paul Tisted, working for the Danish Demining Group, abducted by armed people near Galkayo, a central Somali town located some 200 miles to the northeast of Mogadishu.

The BBC says U.S. officials have confirmed that the American Special Forces performed the overnight operation which resulted in a shoot-out with 9 Somali pirates killed and five captured. The team was parachuted from a plane (although NBC News, citing American officials, reported that two teams landed in Somalia by helicopter) and remained on the ground for about an hour, from 02.00 to 03.00LT (24.00GMT).

After the rescue team had rescued the hostages, the special forces left the area by helicopter and flew back to Dijibouti base of Camp Lemonnier.

If the news of the SEALs parachuted by C-17s is confirmed, the last raid would sign a big change from the last operation the U.S. Special Forces conducted in Pakistan last May, when they killed Osama Bin Laden. Indeed, during the Operation Neptune’s Spear (known also as “Operation Geronimo”) they not only swooped into the Pakistani airspace with a Stealth Black Hawk helicopter, but they were covered by several assets (including an RQ-170 Sentinel, like the one captured in Iran on Dec. 4) whose role was to conceal the ongoing raid.

Since there was no need to deceive an enemy air defense or surveillance system whereas there was that to avoid the risk of both being “announced” by the noise of helicopters or, even worse, to face other problems with stealth technologies in the wrong hands in a foreign country (as happened too many times in the last year) it is possible that, this time, with the Black Hawk Down accident in their minds, the Special Forces opted to be paradropped by a cargo plane.

Indeed, at least four C-17s belonging to the 437th Airlift Wing from Charleston AFB were reported by UK spotters to be refuelled by four KC-135 tankers launched from RAF Mildenhall sowhere off the European coasts on their way to Dijibouti a couple of days ago.

Actually some (if not all) returned to Ramstein before the raid was lauched, so there’s still the possibility they were  only used to carry the US Special Forces and their equipment to their forward operating base and did not take part in the Somali raid.

However, the ramp at Camp Lemonnier is not so huge to accomodate all the Globemasters and one or more could have remained in Djibouti to support the raid and airdrop the SOF troops using HALO (High Altitude Low Opening) system.

Let’s see if the information is disclosed in the next Pentagon briefing but I would not be surprised to know that they performed a real one over Somalia last night.

Some have argued that the aircraft supporting the raid may have been MC-130s. The Department of Defense did not disclose any detail about the involved aircraft and units, however, three MC-130s were reported to have crossed the Pond the night before the raid.

Whether they were involved in the Somali pirates raid or not, it’s hard to say. What can be said is that the C-17 offers higher speed, range and payload. And could be preferred for HALO drops because it is able to fly at higher altitudes where I think it’s also less noisy than an MC-130. 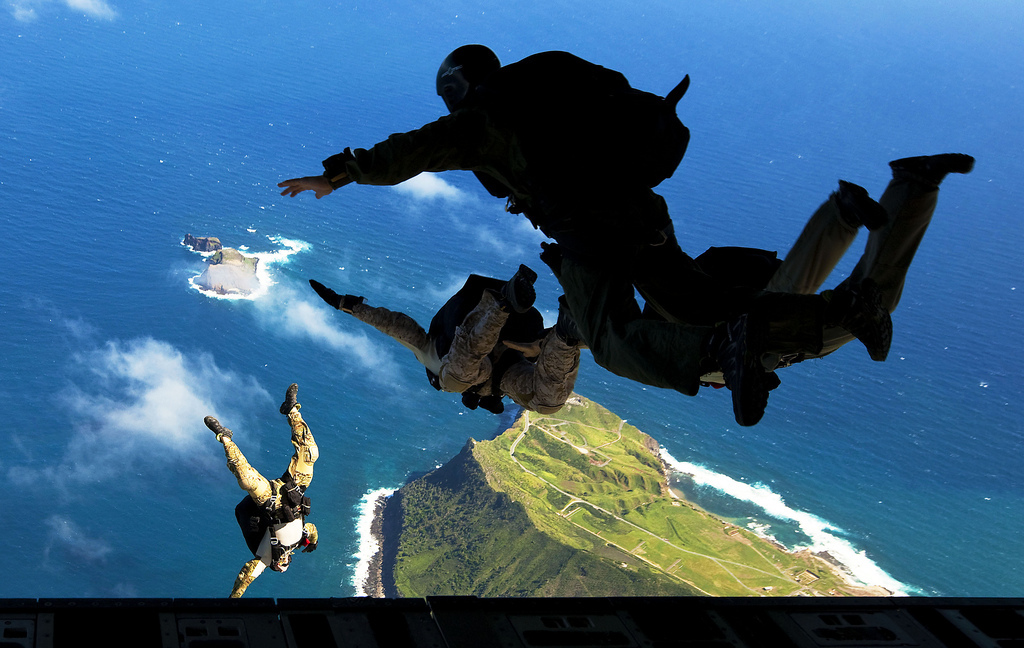 Richard Clements contributed to this article.

I’ve recently published the pictures of the C-17 performing a gear up landing at Bagram, Afghanistan (to read the post click here:http://cencio4.wordpress.com/2009/02/09/c-17-gear-up-landing-in-bagram-images/). I don’t know if the damages on the transport aircraft are beyond repair, […]